With his girlfriend — former Fox News personality Kimberly Guilfoyl — egging him on from the stage, Donald Trump Jr. excoriated the media and the left before launching into a lengthy harangue of Jussie Smollett, the black actor who falsely told police he'd been beaten up by Trump supporters. Transgender and nonbinary people also came into the younger Trump's crosshairs. "The amount of new genders multiplies by 50-fold every day," he said, seldom deviating from a shrill shout during the speech. "I can’t keep track. Neither can they.”

But, according to Trump Jr., those kind of pesky details aren't the point. 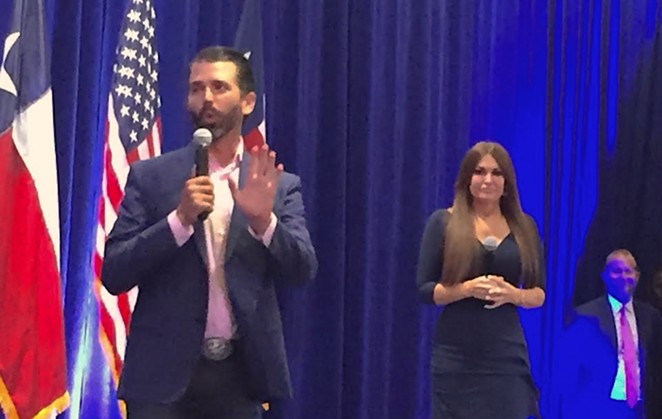 "I'm basically a one-trick pony. You want a wrecking ball? I'm your guy," he said to an eruption of cheers. "Guess what, in this time, we need a wrecking ball. It's what Donald Trump has shown conservatives. For 50 years we did the 'Oh, we'll turn the other cheek.' ... I'm done turning the other cheek, guys!"

Tuesday's event and the Dallas appearance both aim to shore up the elder Trump's support in Texas, until recently considered a sure win for Republican presidential candidates. Now, one recent poll shows the divisive Trump trailing three Democratic frontrunners in the state.

Even so, the San Antonio rally offered little to reel in wavering voters.

All three speeches trumpeted the same record low unemployment figures as evidence of Trump's accomplishments. Beyond that, the selling point seemed to be the president's ability to piss off liberals and "make their heads explode" — a phrase repeated several times from the stage.

The crowd of 600 or so packed into a meeting room at the Henry B. Gonzalez Convention Center was far smaller than the 4,000 organizers had predicted. Even so, the largely retirement-age audience loudly cheered on jabs at Elizabeth Warren and Bernie Sanders (both "communists," according to Parscale), Beto O'Rourke (a "fake Hispanic," according to Guilfoyl) and Joe Biden's son Hunter (a "clown," according to Trump Jr.).

Absent, though, was any defense of the president's family separation policy, China trade war and withdrawal of U.S. troops from Syria. Even Ukraine, the central issue in his unfolding impeachment inquiry, barely rated a mention. Trump Jr. dismissed the matter, saying without elaboration that he'd been talking about that country's political situation for more than a year on social media.

Before it was over, Trump Jr. also dipped deep into the conspiracy well, alleging he's seen video evidence that Instagram had removed some followers' ability to "like" his content after his posts stung liberals' sensibilities. He also claimed the social media channel had tinkered with Guilfoyl's account, causing her to "unfollow" him six times.

While Trump Jr. urged attendees to volunteer for the campaign and talk up the president to neighbors, he offered no guidance on how to close the deal with anyone who hadn't already bought a one-way ticket on the Trump train.

"Even the lies, even the cheating, even the bias will not get in the way of our win in 2020," he shouted over riotous cheers at the end of his speech. "We can do some serious damage to these clowns."

After the rally, as attendees milled at tables outside the convention center displaying bootlegged MAGA merchandise, a young woman with glasses and a "No kids in cages" tote bag cupped her hands over her mouth and repeatedly shouted, "Fuck Donald Trump!"

After she made her way to a nearby crosswalk, she offered an apologetic shrug to pedestrians who'd heard her outburst.

"Somebody had to say it," she offered.

To be sure, it seemed a fitting response to the rhetoric inside the building. The speakers may not have been as direct in their language, but they'd aimed a similar message at the majority of Americans who still refuse to support Donald Trump.