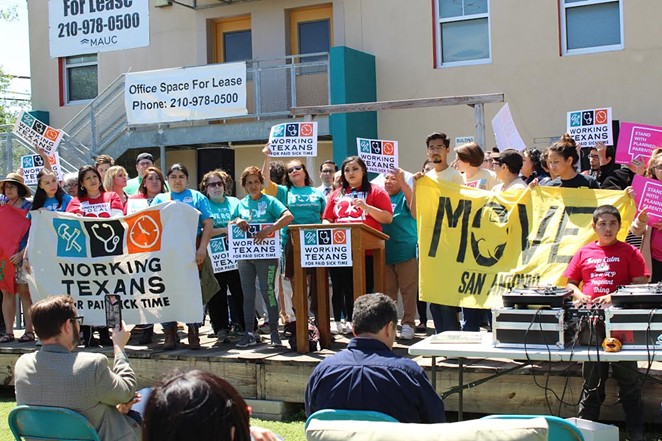 At first, I didn’t take the paid sick leave initiative in San Antonio seriously enough, maybe because I’m fortunate to be compensated for days I’m out sick. Call it a failure of empathy.

In April, AFL-CIO Texas and other organizations, going by Working Texans for Paid Sick Time, announced their drive to put a measure on the city’s November ballot requiring employers to provide paid sick days.

A couple of weeks passed, and I’d forgotten about it until a young woman with a clipboard approached as I pumped gas at a Valero Cornerstore on Broadway. She smiled and launched into her rap about people who have to go to work ill if they want to get paid. I stopped her, politely telling her I was familiar with the and signed the petition.

I promptly forgot about it again – until the petition organizers delivered 144,000 signatures to the city clerk’s office on May 24. That got, and kept, my attention.

A big factor in their striking success was the muscle of organized labor and their partners, including MOVE San Antonio and Planned Parenthood Texas Votes. They fielded teams of well-trained canvassers who chatted up residents in Walmart parking lots, gas stations and other locations across San Antonio.

But the speed with which they collected so many signatures tells you there was a big demand for what they were selling.

Which isn’t a shocker.

A large number of San Antonio workers lose a day’s pay whenever they have to call in sick or have to stay home to care for a sick relative. A study by the Institute for Women’s Policy Research, and promoted by the Working Texans coalition, found that 39 percent of workers don’t receive paid sick time.

That’s at odds with a Bureau of Labor Statistics survey last August that said 32 percent of U.S. workers don’t get paid for sick days. But the difference probably comes down to San Antonio having more than its share of low-wage workers.

Not surprisingly, what you do for a living matters a lot when it comes to whether you get paid for sick days.

The Bureau’s average masks the huge gap between those at the top and those at the bottom. While 93 percent of managers and business executives receive paid sick time, only 46 percent of service-industry workers have that benefit. For construction workers, it’s 47 percent.

That’s a lot of people who have to decide whether they can afford to call in when they’re ill. The fact that money’s already tight for workers is making the problem worse. Per capita income in the San Antonio area was $44,284 in 2016, putting us at 142nd among U.S. metro areas, according to the U.S. Bureau of Economic Analysis. While earnings here are improving, they continue to trail state and national averages.

Add to these money worries the totally-justified sense that nobody with power in Washington or Austin is concerned enough to do anything about surging income disparity, the falling middle class or the plight of low-wage workers.

“It’s become increasingly clear that many people are caught in a position where they can’t afford to take time off to take care of themselves or the members of their families,” AFL-CIO Texas President Rick Levy said in announcing the petition drive in April. “Politics is so broken in Washington and in Austin that we’ve got to be more aggressive and more proactive in taking the fight to the voters.”

The Working Texans coalition is also trying to get paid sick time on the ballot in Dallas, and the Austin city council – which is wrestling with huge affordability problems – adopted the measure by ordinance in February.

The proposed referendum in San Antonio, like the Austin law, would have employees earning one hour of paid sick leave for every 30 hours worked, capped at six to eight sick days per year, depending on the employers’ size.

Locally, a spokeswoman for the San Antonio Chamber of Commerce said many of its members have lined up against the referendum, and so will the chamber in coming days.

The Working Texans organization doesn’t have a monopoly on good arguments. Clearly, there are legitimate questions about whether city government can or should dictate employment policy to local companies.

This fall, the campaigns for and against the referendum will be fierce.

But whichever side you’re on, if you have paid sick leave, just remember that a lot of other San Antonians don’t.