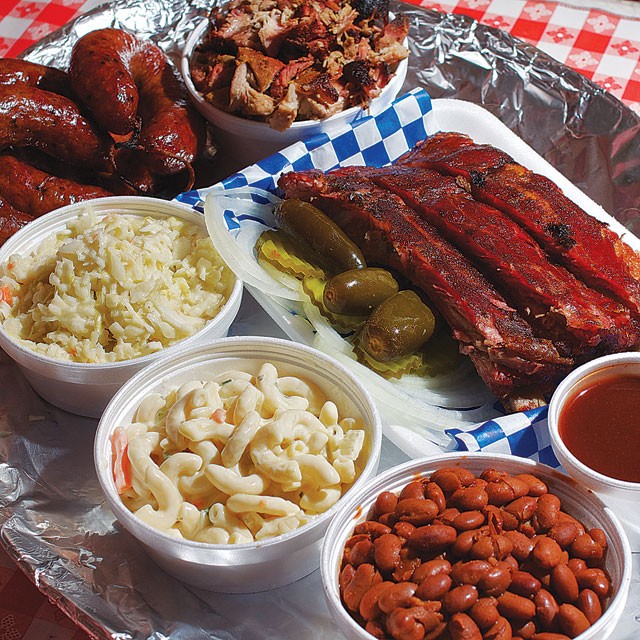 From a restaurant standpoint, it's clear that Stone Oak and South W.W. White aren't exactly equals; one flaunts high-dollar contemporary restaurants, the other is a haven for the homespun: soul food, fried chicken, giant pizzas … and barbecue. If Mariscos El Bucanero actually does return to remodel its original location, then we can add it back into the mix as well, at which point the scale might begin to tip a tad toward the east. In the meantime, there are places such as Ed's Smok-N-Q to keep us coming back. It's not that we found the 'Q here to be outrageously good, but rather that the homey place delivered an honest product at a more-than-fair price. And in an inversion of the usual equation, the sides almost trumped the mains.

It's fair to admit upfront that all four meats we tasted were moist, tender, and just smoky enough. But it also needs to be mentioned that, at least on this day, nothing had a huge amount of flavor other than said smoke — with one exception: the coarse and peppery sausage stood out for its inherently lusty taste, one that was only enhanced by a few squirts of Ed's appealing, sweet-tart barbecue sauce. As beautifully crusty as the sliced brisket appeared, however, it was, first of all, fatty and betrayed no sign of a rub other than salt and pepper. Bring on the sauce.

The pulled pork was better, but was also enhanced by a splash of same. Same goes for the beautiful, crusty, fall-off-the-bone ribs: generous and good but in need of a little lubrication.

The vinegary coleslaw, on the other hand, was a winner, the creamy macaroni salad a down-home classic, the potato salad pretty much pitch-perfect of the picnic type, and the ranch beans were nicely lifted by a dusting of chili powder. Sadly we can't continue the praise to encompass the peach cobbler. Sure, we expected canned peaches despite the season, but the cakey crust and cinnamon-spiked filling didn't say y'all come back to us. I'm told we should have had the cake.