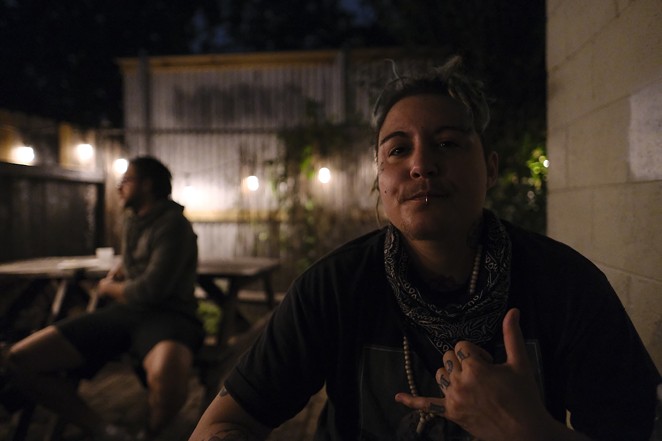 SideShow Kitchen, the made-to-order vegan kitchen run by Pony and Ember Hawk, will be vacating its Faust Tavern space at the end of the month. Faust management says the bar’s concession window will close come June.

In an Instagram post Sunday, Pony Hawk shared a GoFundMe campaign seeking $10,000 so the couple can acquire a food truck and carry on cooking for patrons on the St. Mary’s Strip.

“My dad and my uncles are all carpenters, so we kinda have a little bit of help with that. So, we’re just trying to get some money going so we can build a food truck and just keep serving vegan food to the people,” Hawk told the Current during an interview in Faust’s outdoor seating, periodically squeezing in orders for buffalo fries and barbecue mac-and-cheese spring rolls.

Hawk added that he and his partner are ready for anything. If the truck can’t handle a deep fryer, they’ll use a steam pan. Need to crisp some lasagna? He’ll torch the top himself. His first kitchen job had him preparing sushi, back in 2004, so expect some veggie-friendly rolls at the kitchen’s next incarnation.

The couple got news of the pending closure early Saturday morning, after cleaning up from a long Friday serving customers. A few mental-health days later, they began to plan their next step.

May 31 may be SideShow Kitchen’s last day, but Hawk promises “we’re gonna go all-out” with a going-away bash. Rest assured, though, there’s no bad blood between his business and the club.

“They still like us, we’re still in good standing with the Faust people,” he said.

Alan Codd, one of Faust's partners, agreed. In a phone interview, he expressed a willingness to help SideShow Kitchen remain a North St. Mary’s institution. He said he'd be open to food deliveries to Faust tables, opening space for the food truck or putting in a good word for Pony and Ember Hawk to other nightlife entrepreneurs on the strip.

“The kitchen has always been in flux, pre- and post-Crossroads, and now it will be gone entirely,” Codd said in a subsequent email. “I hope people donate to Pony’s GoFundMe, we intend to donate, and I am confident Pony will find something new.”

Pony and Ember Hawk have been cooking vegan and vegetarian food at Faust since January 2018, serving up options such as Beyond Beef burgers, fried vegan chicken sandwiches and garlic hummus and naan plates.

“The owner of the building wants more room for his guitars and is taking away our kitchen,” the fundraiser reads. “We have been given only one month to get out. SideShow Kitchen is trying to raise money so we can continue serving vegan food to the people.”

Alvarado declined to speak on a recording, saying he didn't want to involve himself in the matter, but he did confirm that there will be more inventory space for Robot Monster’s wares after the closure. However, he said that's due to an ongoing renovation project and is separate from Faust’s decision to stop subleasing space to SideShow Kitchen.

Codd confirmed Alvarado’s take, and Pony verified that SideShow Kitchen pays its rent to Faust, not Alvarado or Robot Monster.

The eatery's crowdfunding campaign has raised $635 at press time.