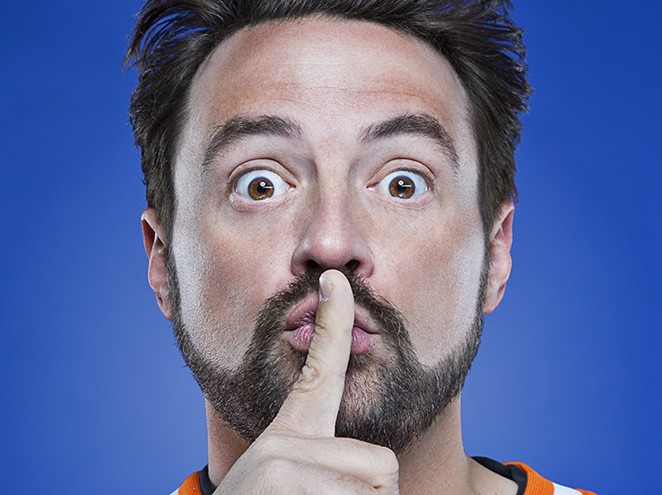 Quite frankly, there is no one else in the world like Kevin Smith. For over 20 years, since he kicked Hollywood's doors in with his directorial debut, the seminal independent movie Clerks, Smith has forged an iconoclastic career and done so with hustle, a little moxie, and a lot of dick jokes. He is currently knee-deep (he'd probably say balls deep, honestly) in a renaissance period in his career and in his personal life.

His podcast network SModcast Internet Radio now features over 30 different shows, most of which he contributes to directly on a weekly if not daily basis. He is the producer of a successful show on AMC, Comic Book Men which will start its fifth season in October. He is currently in the middle of his True North trilogy of films, which are a stark departure from anything else he's done in his career and feature his daughter, Harley Quinn Smith in starring roles.

Smith took time out from his increasingly busy schedule to promote his upcoming live show, Hollywood Babble-On that he co-hosts weekly with comedian Ralph Garman to talk about making movies, dieting, and his love of latex movie monsters.

You wear a lot of metaphorical hats these days with the podcasts, the TV shows, the films. You do more now than you ever have. Labels suck, but what do you want to be known as? Are you a director who does podcasts and other things or something else entirely?

When I started the career, I would've killed to be known as a director. And then now, that wouldn't be enough, you know what I'm saying? Then people can judge you on that one thing alone. If they could only get me at the one thing like hey he's a director, then you rise and fall by your last film. If you're a storyteller, then it's different. You're kind of buoyed by your last story. I've been in that room when something dies, like Mallrats. It died opening weekend and your whole year is based on that and you've got no fucking plans and there are months of rebuilding.

Slowly you learn to spin more plates so you don't get caught like that. Maybe the work suffers because you don't devote focus to one specific thing, but I kind of like being a jack of all trades than a master of one. People like Quentin [Tarantino], Richard [Linklater], Robert [Rodriguez], those motherfuckers were put on this earth to make films. They can do anything in life, but my God, it's in their blood. It's in their DNA. So cats like that, they're directors. Me, shit, I'll get lost in the Internet and tour and talk to people.

Cats like that, they're off working on the next one and working on the next one. Two of those guys have already been up for Oscars and Robert probably has gotten some nod for something somewhere. That's never been my thing. You know, if someone wants to give me an Oscar, then I'll fuckin' take it in a heartbeat and if I only have to suck a little dick for it then I'll be happy to. Chances are though, that's not gonna happen. You find your Oscar gold in other places. You find your own little, weird bridges to cross and doors to go through.

That makes sense. So, while you do spin a lot of plates, is it safe to say that podcasting right now is your main plate or at least the plate you get the most satisfaction from?

You know, I've said before you have to imitate something before you can innovate something. I loved listening to Howard Stern and with the podcasts, that gave me the chance to be like Stern. Do that thing that he does that I love. With the live Q&As and being on stage, you know, I love George Carlin and that gives me a chance to be up there like him. I'm not as brilliant as him and have everybody listen to what you're saying and maybe give them a little inspiration at the same time while getting to tell some dick jokes that is cool. I don't know if I could make a career of it, but the film career has allowed me to do all of these things. I just kind of go along and collect things like, “Oh, that looks fun.” 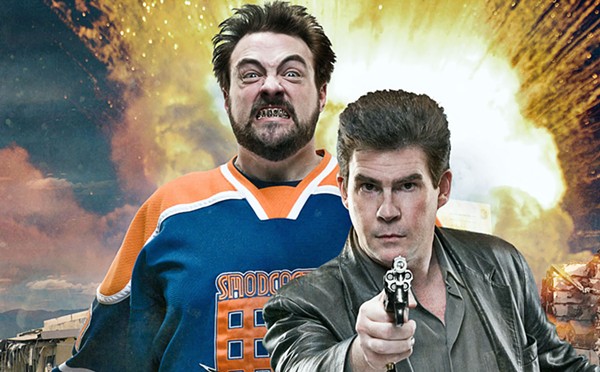 You’ve mentioned other places before how you were “done” with movies for a little while. Would it be fair to assume that doing the podcasts has kind of re-stoked that filmmaking fire?

Oh yeah, oh yeah. Definitely. I mean, there are so many different things I do on the podcasts, like the one I'm coming to town for with Ralph, Hollywood Babble-On. That's just us commenting on pop culture. That's more like a nightclub show. It's fun as fuck and he's hysterical, but we don't really get in to storytelling. Periodically, since we both work in the industry, I can add insight to something like he'll mention working with someone and I'll be like, “Hey, I worked with that motherfucker too.” Like this last episode that we did last week, he opened up with this story about almost working with Bruce Willis. It was phenomenal and epic and I was enthralled because I knew where he was coming from and how he got “Willis-ed.”

Sometimes stuff like that happens in the show, but storytelling like we do on SModcast really started pumping shit for me honestly. These three Canadian rubber monster movies that we're doing, Tusk, Yoga Hosers, and Moose Jaws, these are kind of like valentines to Scott Mosier cuz it's all shit we talk about on that show. We've been doing it eight years now and we just make up shit every day and we fuckin' laugh hysterically. Some of the best times I've ever had have been on that show. One day I said, why don't I put all that goofy shit we're doing to work for me, you know? I want to see that walrus movie we're talking about.

From the outside looking in, I would think that one of the really great benefits of this new “direction” you’re taking is getting the chance to work with your daughter. What has that been like for you?

Oh, it's been tremendous man. I never saw it coming. She was always into music. She was a bass player. I took her to practices and went to shows and tried to be supportive, but I couldn't really do anything for her. And then we shot Tusk and it was just a day, but her and Lily [-Rose Depp] just loved it ,and they’re both really natural and stuff. She came to me the next day and told me she really loved it and that this was what she wanted to do. I told her, well you know kiddo, you're really natural at it and maybe we can start doing some stuff.

Working with my kid, dude, is bliss. I started thinking about it and then I asked the kid before I even started writing if [Yoga Hosers] was something she would be interested in and she said yeah, she thought it would be funny. So, I started writing it and it pulled together so fucking quick. Like we were on a set four months after I finished writing it. There I am, watching my kid standing with her friend since childhood who's standing opposite her Dad, Johnny Depp, who's like one of the greatest living actors. Before he left that day, he says to me “Dude, did you see how natural those girls are? If we had any brains, you and I would retire and just live off these girls.” And I say to him, well only one of us owns an island to retire to.

Before we get to the show, I know you've been on this diet the past year and you've lost quite a bit of weight by giving up refined sugar. How has it been going? How difficult has it been?

It's been good, man. Oddly enough, I haven't been tempted to go down that path. Every once in a while, some sugar has crept in, like at my birthday, I had some ice cream, like a spoonful. But I didn't relapse or go off on a bender like ahh! I'll suck some dick for some sugar! Since I haven't had any sugar in so long, a little goes a long fucking way. Back in the day, everything I ate was pre-sweetened. So, after not having any for so long, now the sweetest thing I have is milk, which tastes like nothing. So for me, something like chocolate is off the charts sweet and your body reacts to it like holy shit. But, I haven't had anything where I've been ravenous. Nothing yet has pulled me away. So far so good.

Tell everyone what to expect at the Hollywood Babble-On live show coming up?

For Babble-On, we're celebrating our five-year anniversary with this show and for some reason, Ralph was like let's do it in Texas, it's a big show. And San Antonio was picked. We're looking forward to it. As for what people can expect with the show me and Mr. Ralph Garman are commenting and going over every piece of entertainment news and what not. We talk about movies and comics and stuff, but it's like a nightclub show. It's very bawdy. If Red Foxx only talked about comic book movies, that's what this would be. It's geeky, but at the same time it's a really good time and I can't believe we've been doing it for five years. It's really fun sitting next to Ralph who's hysterical. For me, it's a co-pilot kind of gig. I wouldn't say I'm quite Ed McMahon, but I do laugh a lot. I just kind of react of him. It's a fun, fun show.