Stars Guard Jia Perkins On Being A Baller – And Pro Mom 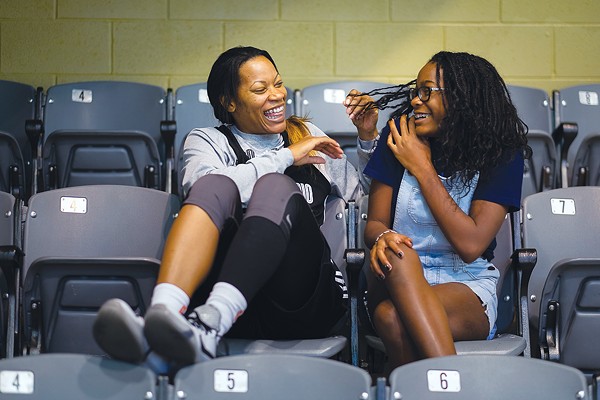 It was clear early on that Jia Perkins would make her life all about basketball.

And after turning into a well-respected player at one the country's women's basketball powerhouse college teams, her chances to go pro looked real good.

Then, in her senior year, she got pregnant.

In her mind, the news surely meant that those chances of making it in the Women's National Basketball League had dramatically dwindled. At best, she thought, she'd have to search out teams later for tryouts.

But it never came to that. The Charlotte Sting picked Perkins in the 2004 WNBA draft.

So instead of providing a setback, the birth of Perkins' daughter ended up being the player's good luck charm. And it forever altered her life priorities.

"I'm not two different people, on or off the court," Perkins, a shooting guard with SA's WNBA team, the Stars, told the San Antonio Current after practice in late July. "I'm always a mom first."

Perkins, 33, was born in New York – her father played professional football with the New York Giants for seven years – but grew up in Granbury, near Fort Worth.

She and basketball became inseparable since she was 7, when she started playing with her family. Her mom schooled her from the get-go on the art of being a team player and not a ball hog.

She dabbled in other sports but after her first year of high school, it became all-basketball-all-the-time. And she was good. Real good. In White Men Can't Jump style, her older brother would take her to serious baller pick-up games and fool players who never thought a girl would take them to school.

"I have no idea if he was betting or what," Perkins recalled with a laugh, "but I remember him telling me that after I made the last bucket for the win, to start running."

A successful high school prospect, she earned a scholarship to Texas Tech, a perennially top-ranked team that was actually No. 1 in the country when Perkins was a senior.

It was that year that she got pregnant with Aalirah. She actually kept playing for four months, thinking otherwise she risked losing her scholarship.

The biggest surprise took place several months later, during the 2004 WNBA draft: "I got a call saying I got drafted and I said, 'whaaaat?' Pregnant and all? I didn't even think that was possible!"

Eleven years later, Perkins finds herself in the Alamo City, now into her fifth season with the Silver Stars and serving as a widely respected veteran and team leader.

Known for her defensive skills, her career stats include 11.7 points and 1.6 steals per game. She played with the national team in 2002 and was named a WNBA All-Star in 2009.

"It's fun to have her on the team," Jayne Appel, 27, a center for the Stars, told the Current. "She's someone you can lean on. She works your tail off and holds everyone accountable."

Like many other star WNBA players, Perkins has taken to playing overseas to supplement her income. Unlike their male counterparts in the NBA, who earn on average $5 million a year, WNBA players make average about $75,000. They can make as much as $500,000 playing abroad.

They usually fly off to far-flung places for three to six months right after the WNBA season. Perkins has played in Slovakia, Turkey, Israel, Greece, Poland and Dubai.

But unlike many of her WNBA colleagues, at each stop, Perkins wasn't just focusing on herself. She took Aalirah with her everywhere, so she had to have her schooling lined up. In San Antonio, Perkins' mother helps with logistics.

The soft-spoken 11-year-old sixth-grader has taken it all in stride. She realizes she's got quite a unique family life. She does like basketball and wouldn't mind following her mother's footsteps, but she's keeping her options open.

What about at school, do her classmates know what her mom does for a living? Oh, yeah.

"It feels great that everyone knows my mom," gushed Aalirah, a fixture at her mom's practices. "Everyone wants to be popular! There's never getting too much attention."

Hughes told the Current that Perkins has stood out, using her skills as a veteran player and her parental knowledge to mentor and mold her teammates.

"I've watched her grow into a leader," said Hughes. "Sometimes, as a coach, players take energy from you. Jia always gives you energy."

Sounds like Perkins could be coaching material in her own right. Hughes readily concurred.

"Just like her daughter, Jia is very thoughtful," he said. "She could be a good coach. If she asked me if she should, I'd say yes."

So is that in the cards for Perkins? She's not sure yet. For now, she intends to fulfill the remaining two years in her contract. Not surprisingly, family is not far from her mind – that's why she's not likely to keep playing overseas in the off-season.

"It was fun and a great experience for us, but I don't want Aalirah to keep missing school here," said Perkins. "I don't want her to have to keep moving. I want stability for her."