Sink or Swim for 210 Ceviche 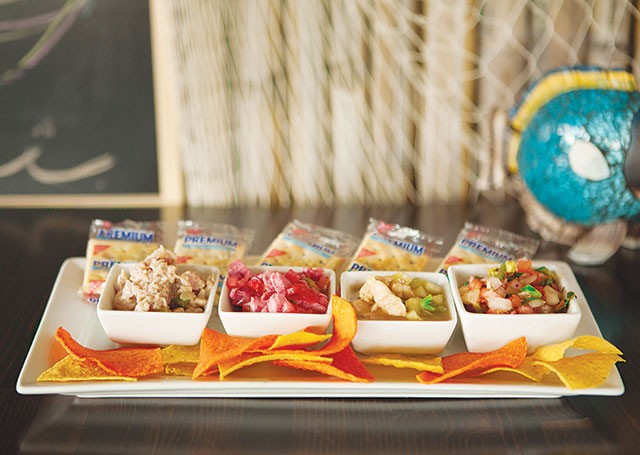 It’s difficult not to think of The Lonely Island’s first massive hit when entering 210 Ceviche, the latest restaurant endeavor by the same folks who brought you El Taco Tote. (The restaurant and bar are literally an extension of Taco Tote. The doors to either establishment are a scant 15 feet apart. Perhaps owners Arnie Ortega and Ricardo Mora wanted to keep things close?). I wasn’t the only one wishing I’d worn my flippy-floppies and nautical-themed pashmina afghan; my dining partner put it best, “I feel like I’m on a boat.”

Sure enough, the white walls, cerulean chairs and booths, and glazed wooden tables give the restaurant a seafaring quality. The ceilings are lined with kitschy fish and starfish décor made from plant fiber, and Mason jar light fixtures scream “Pin Me.” It’s evident Ortega and Mora put a lot of thought into the look and feel of the restaurant, a concept that hearkens to the Pacific coast of Mazatlán.

210 Ceviche joins a slew of marisquerias in SA that put ceviches front and center. It’s hard not to compare it to La Playa, El Bucanero and La Gloria, who’ve left their marks on the city based on the freshness of their seafood.

The ceviche sampler is the best way to get a taste of a few varieties, and the selection changes daily. The sampler du jour during our visit featured the 210 (part of the restaurant’s house specialties) with sizeable chunks of shrimp, celery and cucumber in a soy-citrus marinade; an Ahi tuna ceviche; Mar Rojo (a favorite which, according to our server, somehow didn’t make the cut when the menu was trimmed down a few weeks ago); and a ceviche al Clamato marinated in lime-Clamato sauce. The presentation is sweet and simple; ceviches are served with tostadas and saltine crackers.

Out of the four ceviches sampled the Mar Rojo was the unexpected standout. Its reddish hue, a bit startling at first, comes from its marinade, a mix of limes and beet juice. But that’s where the beet’s influence stops—there’s just a hint of earthiness, that doesn’t overwhelm, as most beet dishes are wont to do. Al Clamato was the second favorite, and most traditional of the ceviches; the 210 was a bit of a dud, the soy-citrus marinade overpowered the fresh shrimp to a point of dullness.

A smattering of ceviches overlap into the “solteritos” portion of the menu devoted to single-serve tacos or tostadas. The Tostada Tres Islas is a highlight with its straightforward take on ceviche, but the more adventurous Ahi-tada, with Ahi tuna, lemon and adobo falls short. It’s when 210 Ceviche tries veering into zany that it loses a hold of what it does well enough. The best example of this is the Enjarrada tostada, a stomach-turning concoction presented as goopy pureed Albacore tuna and guajillo chile paste slathered onto a tostada (that quickly lost its crunch) and topped with avocado chunks and jalapeno slices.

While small plates are definitely in, pimping out less-than-awesome single-serve tacos is a cheap attempt at classing up a menu. The signature 210 Taco sounds great on paper, but the single beer-battered, bacon-wrapped jumbo shrimp laid on a bed of refried beans in a flour tortilla left this diner verklempt. Heartier plates, or platos fuertes, such as the Arroz 210, a creamy Poblano sauce-covered serving of rice tossed with calamari, fish and shrimp, and the sautéed salmon con alcaparras (capers), both accompanied by expertly sautéed zucchini, squash, broccoli, and red and green peppers, were satisfying dishes.

Perhaps it was the dangerously delicious and sweet 210 cocktails that drove dozens of diners into the restaurant on an overcast Sunday night to watch Mexico’s men’s futbol team lose to Panama in one of the CONCACAF Gold Cup openers. The best-selling Sirenita, a slushy mango nectar and Malibu rum sipper once again returned the beach-y feel of the restaurant. The Pirata, a mix of Ciroc, peach schnapps, pineapple and cranberry juice could easily be found at any coastal resort. The 210 Michelada, served in a massive Mason jar, could fix any cruda (or make you forget your favorite team’s loss).

Paired with a fruity cocktail, one might forget the taste of that aforementioned Albacore goop. Hopefully 210 Ceviche remembers its namesake, and learns to stay the course and leave the more adventurous cuisine off this boat.