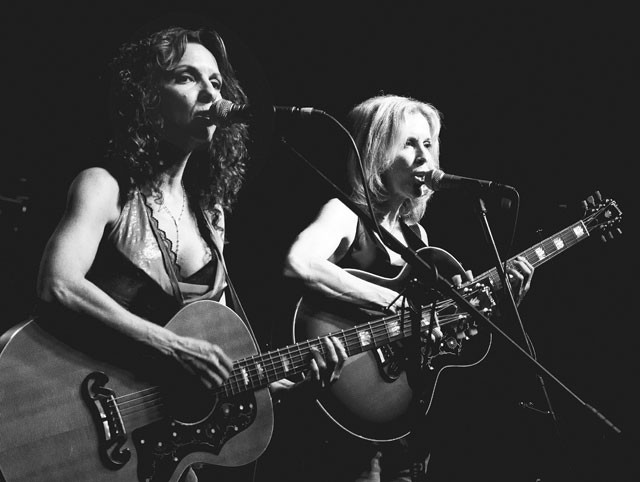 The show started at 9 p.m., but at 7:56 the line stretched almost all the way to Grayson Street. It was a proper show of respect and support for the Sisters Morales, who bid farewell to San Antonio with two stirring sets.

After four fine albums (a fifth, live Spanish-language album recorded in Houston will be released in three weeks), it was time for sisters Lisa and Roberta Morales to go their separate ways. Lisa released her first solo album in January (the strong Beautiful Mistake), and Roberta is writing a children’s book while planning her own solo debut. While the farewell tour continues in Austin and Switzerland, this was it for San Antonio. And it could not have been a better party.

Sisters Morales have never been innovators, but they excel at straddling two different worlds (the Spanish one filled with Mexican folk, Afro-Cuban boleros, and Argentine tango, and the rockin’ Americana/blues fare) and having not two, but five different voices. They provide crystal-clear harmonies while singing in unison, edgy, country-flavored attitude on the English numbers, pure pop tenderness in the slower tunes, and radically different personas while singing in Spanish. Especially in Lisa’s case, the change is chilling. On the polka “Palomita,” she sounds like Celia Cruz would’ve had she been born in Northern Mexico or Southern Texas. It is a mean, nasal tone that symbolizes one of the duo’s greatest traits: its versatility.

For Lisa and Roberta (who both sing and play rhythm acoustic guitar), being backed by top-notch musicians Saturday didn’t hurt. Carlos Alvarez (who normally plays the stringed vihuela at SA’s Mariachi Campanas de América) spent most of his time on accordion, enjoying friendly duels with guitarist (and Lisa’s husband) David Spencer. On virtually every song, their extended solos added to the groove. In case you forgot that Sisters Morales can also rock, Spencer jumped from Santana-meets-Hendrix displays of virtuosity to Veracruz son huasteco soloing; this is not a guy who one day just “learned” how to play these styles — he perfectly feels and understands the intricacies of genres that require as much technical prowess as sentiment. Austin drummer Vicente Rodríguez and bassist Michael “Cornbread” Traylor were solid, but the show’s fireworks came from Alvarez’s and Spencer’s side of the stage.

“Caminito,” a classic 1926 tango by Argentina’s Juan de Dios Filiberto (named after a street in the popular Buenos Aires neighborhood of La Boca), could have ended in disaster done by someone else. But the sisters kept the tango in the verses, playing the chorus in bolero trio style with a rare two-vocals arrangement. They got away with it on pure musicianship and respect for the original’s spirit. But the biggest of many highlights was a haunting, slow, bluesy spiritual to be included on Lisa’s next solo album: “Black bird,” written for mother Gloria before her passing two years ago. It is a true gem, and one of the best songs the sisters ever sang together.

No more San Antonio for the Sisters Morales, but there’s still time to pay your respects before they sign off for good by hitting Austin’s Iguana Grill on September 4, unless you’re prepared to hit the Alps.