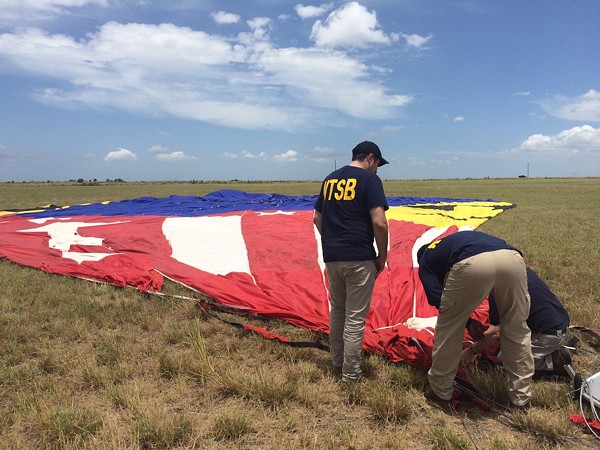 Six of the 16 victims who died in a deadly Central Texas hot-air balloon crash this weekend are from San Antonio.

Just before 8 a.m. Saturday morning, a hot-air balloon floating above a field near Lockhart struck a high-tension power line before crashing to the ground, killing everyone on board, according to the Lockhart Post-Register. Margaret Wylie, who lives near the crash site, told the newspaper that she dialed 9-1-1 after hearing a pop followed by a tower of fire rising from the field. "And then I heard another pop — it sounded like gunshots," she said. "And then I saw the fireball, and I thought that it was a tractor, and I just started praying that whoever was involved got away before that happened."

Authorities haven't identified the victims yet, telling reporters dental records will be used to identify the dead, but friends and family have begun identifying their loved ones, including six who were from San Antonio. According to media reports and GoFundMe pages, Brian and Tressie Neill, Paige and Lorilee Brabson, and Matt and Sunday Rowan all perished in the crash.

According to a gofundme page set up to raise money for funeral expenses for the Neill's, the couple was celebrating their 23rd wedding anniversary. "Brian surprised his lovely wife Tressie with a trip to watch the sunrise by hot air balloon, something they have both always talked about doing and he had planned for months," Candice Neill Wagner wrote on the fundraising website. "While being in the air, Brian had sent his brother, Curtis, a picture from the air and stated, 'can you see our reflection in the clouds?'"

Lorilee Brabson and her daughter Paige, who moved to Texas from Colorado a few years ago, were celebrating Mother's Day, according to Paige's brother Jason Pino, who spoke with a Colorado television station about the accident. Patricia Morgan, Paige's grandmother, set up a gofundme page to raise money for her granddaughter's 11-month-old child. Morgan said Paige was a hard and dedicated worker who was employed by La Hacienda restaurant.

Matt and Sunday Rowan had been married for less than a year. Matt was chief over clinical trials for burns and trauma at Brooke Army Medical Center's Institute of Surgical Research and Sunday worked at a clothing store called Crazy 8, according to the San Antonio Express-News. Josh Rowan, Matt's brother, tells the newspaper that the couple married in February and were planning to start a family.

The crash is the deadliest hot-air balloon accident in U.S. history, USA Today reports. The balloon that crashed was owned by Heart of Texas Hot Air Balloon Rides. The owner and operator of the company, Alfred "Skip" Nichols also died in the accident, the newspaper reported. The last hot-air balloon crash of this magnitude happened in Luxor, Egypt in 2013, when a hot-air balloon carrying tourists caught fire while landing, killing 19 of its 20 passengers.