Christopher Ware leads our group into a lofty conference space with mile-high ceilings, two giant wooden tables and possibly the comfiest meeting chairs I have sat on. Ever. I’m trying my best to be a fly on the wall at the meeting as members of Austin’s Strange Fruit Public Relations and Ware meet to discuss the final details on a press release that will effectively announce just about everything there is to know about Downtown’s upcoming rooftop bar, Paramour.

Betwixt the dotting of i’s and crossing of t’s of the press release—Ware’s actually extremely particular about how certain things are phrased and what verbiage is used to describe the bar’s details—the general vibe for Paramour comes to life. The bar, all 8,000 square feet of it*, sits atop the Phipps Building at 102 9th Street (we’re actually meeting in the Phipps building during this instance as it also houses Martin Phipp’s law firm, more on this later), where the majority of its square footage is made up by outdoor patio space.

But before you think about popping in with your pals, you’ll have to make sure your reservations through the bar’s website are set. The entrance will be on the river side of the building and a doorman will both screen for ID purposes and provide access to the fourth floor bar. Once you check in, Paramour is all yours.

If it seems a bit exclusive, well, that’s because it will be. This isn’t going to be your neighborhood Cheers, and there’s a reason for that. Paramour is Ware’s no-holds-barred take on a concept he’s coined as speakcraft, a hybrid bar. If Paramour was in showbiz, she’d be known as a triple threat—there’ll be cocktails, wine and beer for all levels of fandom.

To better understand where Ware is coming from with Paramour, we have to start at the very beginning. Yes, we could look at his previous work experience, which is nothing to sneeze at—two years as the Bar at Bohanan’s head bartender, followed by opening the lauded bar at Arcade—but the story of Ware doesn’t start there.

“I’d never been behind the bar until Bohanan’s,” Ware says.

Hailing from Amarillo, 32-year-old Ware has seen a fair share of adventure. After attending a private military grade school, Ware joined the Marine reserves while at Texas Tech University. He was eventually deployed to Iraq for seven months in 2005*. Upon his return, and having already completed his undergrad work, he took advantage of the Texas Veterans Commision’s Hazlewood Act, which provides up to 150 hours of tuition exemption to complete his masters in history at Tech. Fair warning, don’t get Ware started on history unless you can keep up.

Ware and his wife Britney’s first ever visit to San Antonio was for the Texas Tech-Michigan State game on January 2, 2010, when they stayed at a bed and breakfast on Beaureguard in Southtown. The weekend visit turned into a five-day traipse through the area, meeting Steve and Jody Newman, and falling in love with San Antonio enough to move down the following month. Ware was laid off from his job in medical sales and he dipped his toe into bartending by answering a Craigslist ad for the Bar at Bohanan’s.

“I didn’t expect to stay in the service industry,” Ware says. He started in March as a bartender where he trained under Sasha Petraske*.

“I would read about four or five spirits a night. I’d take notes, watch videos. I’d read every book I’d get my hand on written over the past 100 years,” Ware says. “Luckily, Bohanan’s is the best place to work for anybody that’s willing to learn. There’s no ceiling. If you’re not an idiot, and you take advantage of that, it’s a great education.”

His role as head bartender ended in 2012 when he left to help open Arcade’s bar, where he honed the speakcraft concept. “That’s what we had at Arcade. Two wells, and we were pumping out more than enough drinks [at restaurant capacity]. It’s about how you set yourself up for success and how you design a bar. It’s your cockpit. You can’t move, people have to be there helping you, helping you expedite, but one guy can pour 40 to 60 cocktails an hour, as well as pouring beer and wine with no problem.” 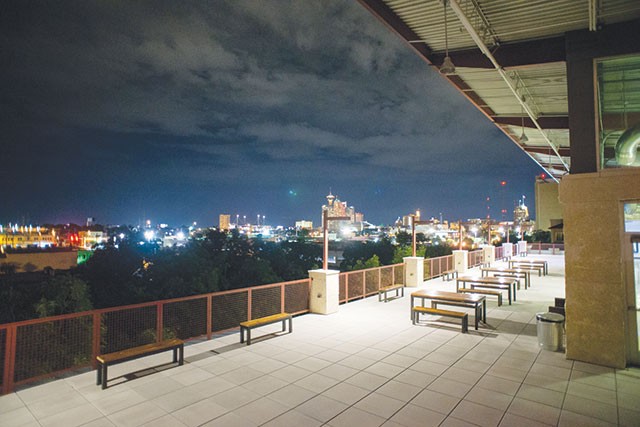 Ware met Phipps at Arcade, where Ware credits “having really good booze” as one of the reasons they’ve partnered for Paramour. “He and his friends would come in and try to stump the bartender.” The two-month will-they, won’t-they turned into an invite to help design Paramour within Ware’s dream specifications, no expenses spared.

Ware’s brought on board a gaggle of industry badasses, including, but not limited to, his No. 2 David Rangel, who’s curated a 100-bottle wine and Champagne* list and will run the front of house; Bohanan’s alumni Andrew Hack and Jake Corney will join the bartending staff and bring their hand-chipped ice to Paramour; and artist Amada Claire Miller has been brought on to direct graphic elements. An interesting addition to the staff is Lorenzo Morales, former sous chef at Arcade, who joins Paramour as Shrub Chef, an almost unheard of position, who will work on all scratch-made bitters, shrubs and juices.

Although Ware is plenty playful, the list of rules that have been handed down to the staff (after being combed over by his attorneys) presents another tone. This is, after all, a business. I sat in on a staff training and insurance information session—yes, employees at Paramour will all be offered healthcare—where a more serious, cerebral Ware peeks through. He’s orchestrating a show that includes 10 to 20 cocktails, 10 craft beers on tap, 10 bombers, 40 craft bottles and cans*, 100 wines and 1,000 spirits. Then there’s the Cage, a collection of rare and über-expensive bottles (a $6,000 Cognac drink was mentioned), a still undisclosed food component and the outdoor bar, which will rotate themes seasonally. The first theme will pack in mescals from the opening date through January.

“The idea behind being a good manager is that you’re a director. Directing the actors that are on the stage. If you can direct people for the show, and [you’re] engaging and people are enjoying themselves the show is working. It’s all about the charisma and intelligence to know what’s the difference. To see if the customer is enjoying themselves, or not, it’s really about situational awareness.”

There’s still plenty of work to be done before Paramour opens its doors (and the date is still not entirely set in stone); Ware and co. are already working 100 hours a week, before Paramour even lets its first customers in. His Google calendar is replete with appointments and meetings (if it’s not in my calendar, it doesn’t exist, he says), and he’s meeting for tasting, after tasting, after tasting with brand reps across SA and Austin. He hopes to expand peoples’ palates and perception of the area with Paramour, an adult affair.

“You know what’s cool? Having the ability to show people what’s really out there, and show them how to get out of the college mindset. Who will it benefit? People want to be exposed to things.”

* The article has been changed to reflect the correct dates of service for Ware; his training under Sasha Petraske; and updated wine count; and square footage of Paramour