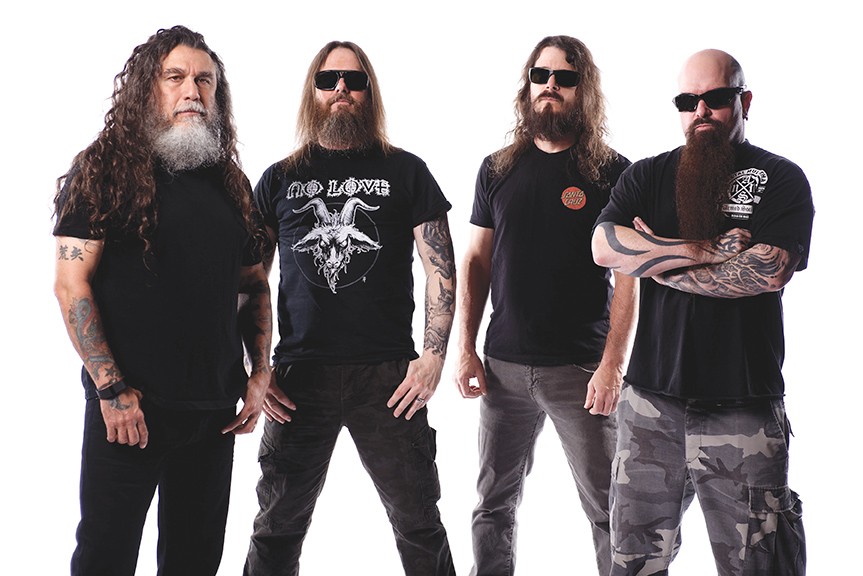 It's been six years since thrash overlords Slayer released their last album, a time window during which two crucial band developments occurred.

One, an MSG revelation: the Slayer Dog. At a price tag of $6.66, Austin's Frank Hot Dogs gave the world a spicy link with habanero-jack cheese, cayenne-dusted bacon, tobacco onions and the unknown gore of 'Slayer Sauce' for the band's appearance at Fun Fun Fun Fest in 2011. Hell hath no fury like a Slayer Dog heartburn.

The other, a tragedy: the death of guitarist Jeff Hanneman. In 2013, Hanneman, the guitarist who wrote Slayer pillars like "Raining Blood" and "Angel of Death," died of liver failure at 49.

"I can't say it's been business as usual because he was a brother, you know?" drummer Paul Bostaph told the San Antonio Current. "For me, it wasn't easy. I've talked with my friends about this, but when someone passes away in your life, there's a hole, a gap and you know they're gone. There's a kind of guilt in that."

Before his death, Hanneman contributed one cut to Slayer's new album, Repentless. A few weeks before the band's appearance at the Rockstar Mayhem Festival in San Antonio, I received half of the new album through email, with security measures you might expect for a matter of national security. Of the six songs I received, Hanneman's "Piano Wire" is the murderous pick of the litter. A slow tempo by Slayer standards, the band's intensity and military precision threatens to garrot anyone who steps in the band's warpath.

For the remainder of Repentless, Hanneman's loss inspired Slayer as an absent center, his memory serving as a counsel from beyond.

"While recording, instead of walking into the booth and telling me what he thought, he more or less was in my mind," said Bostaph. "What would Jeff think or what would Jeff do?"

Repentless, out on September 11, is Paul Bostaph's first studio appearance with Slayer since God Hates Us All (eerily released on September 11, 2001). The band's 11th album remains true to the thrash metal Slayer helped define in the 1980s — light-speed hardcore rhythms, themes of social unrest and the Inferno and hellacious shredding to match.

With each Repentless solo, guitarist Kerry King comes out of the gate like a bullrider trying to hold onto his instrument. Lyrically, the "hate the fucking scene" material isn't as rewarding as singing about hell, Nazis and running the demonic playbook. It's also a little juvenile for a band that's pushing 40.

But, largely, it's good to hear that Slayer is putting out what it's good at. There's no Lou Reed collab like on Lulu, the dross known as Metallica's last record. There's no nu-metal flirtation à la '90s Slayer. Repentless is a document of a band playing harder and faster as 50-year-old men than most basement metalhead teens could dream of.

Paul Bostaph first joined Slayer at the age of 28, trading in a career with Bay Area thrash crew Forbidden for the world stage. In 1992, when Bostaph enlisted in the band, Slayer just came off a trifecta of massive albums — including thrash's crown jewel, 1986's Reign In Blood.

Bostaph's first studio gig was a strange one. For the abominable '93 thriller Judgment Night, Slayer teamed with Ice-T for three songs on the movie's soundtrack. Thankfully, with Ice-T on his Body Count punk kick, the tunes are markedly better than the movie (may the employment gods have mercy on the casting director that paired Stephen Dorf and Cuba Gooding Jr. onscreen).

Two years into his Slayer care, Bostaph was introduced to gold-hit alchemist Rick Rubin, who had been working with Slayer since Reign In Blood.

"Like anybody else you hold up on a pedestal, I've always wanted to meet Rick," said Bostaph. One of the most important things I've learned from him is not to play the music perfect. He pointed that out in my playing, he said 'look, the most exciting drummers sound like they're going to fall apart at the last second but don't. You're thinking 'how are they gonna come out of this' and all of a sudden you do, that's when the excitement happens.' I think that advice from him made me stop walking on eggshells and really attack it."

In his adjunct tenure with Slayer — working between the contract disputes and side project vacations of original drummer Dave Lombardo — Bostaph has helped the band maintain the integrity of its pentagramic font.

There's an inherent silliness to most brands in Big Metal, whether it's the winking gothic operas of King Diamond or the hellbent leather of Judas Priest. But Slayer can rock a video like "Seasons in the Abyss" in front of the Pyramids, with a Viking ship and it's still dead serious. Operative word: dead.