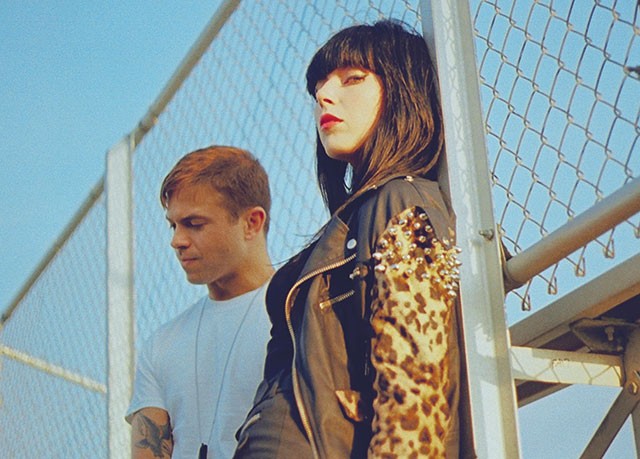 Noisy, bombastic power pop duo Sleigh Bells has been setting the world on fire with their highlighter-green flame of hot rock for the past half-decade or so. The band is currently on the second leg of its tour supporting Bitter Rivals, their third full-length, which dropped late last year. Over the phone, I got a chance to speak with singer Alexis Krauss about their evolving style, bleeding all over the stage due to pointy guitars and her love of R&B.

So this is the second leg of your tour, and I noticed you are doing a ton of festivals (Coachella, BUKU Festival, NXNE). Do you enjoy the festival circuit?

Yeah, but festivals used to really intimidate us because we weren’t really as confident a live band as we should have been, considering the scale of the festivals we were playing. For example, we played Coachella for the first time before the first record had even been released [nervous laughter], so it’s really nice to play them now at this point, because we’re really confident onstage and our live shows feel super tight to me. I love the idea of bringing our music to a big stage with an incredible sound system, because it really does the production justice.

Are you adding any extra players for the tour?

We added a live drummer. We’ve never played with a live drummer before. His name is Chris Maggio and he’s just a total machine, a beast of a drummer. It works, because he’s really able to lock into all the electronic production. Our really good friend and production manager Ryan Primack is playing guitar. He was actually Derek [Miller, Sleigh Bells’ guitarist]’s bandmate in Poison the Well, so they’ve known each other for years. They really work in rounding out our sound and making the live show sound as close to the record as possible.

You’re known for your bombastic, over-the-top shows and stage presence. Do you think it’s challenging to translate the live energy to recording?

The more comfortable we get on stage, the more comfortable we are playing a more “diverse” show. I think in the beginning, when we did Treats, it was about getting up on stage and powering through and banging people over the head, like a sensory overload; it’s just an explosion of sounds and lights and then it’s done. As time has progressed, we’ve become more comfortable being more vulnerable onstage; letting the show diversify and playing songs that maybe aren’t as bombastic as “Infinity Guitars” and “Crown on the Ground,” and having moments that are softer or quieter or more subtle. I think the live show is a really good reflection of where we are musically. Our music has become more melodic or more feminine at times, but then more abrasive at times. We’re just interested in incorporating all our influences and all of the things that we like as music lovers, first and foremost.

Some of my favorite songs on Bitter Rivals seem to be more R&B influenced. Does that stem from a more collaborative writing process between you and Derek?

Yeah, me and Derek, our writing relationship has been growing since Treats, but this [record] is the most collaborative it’s ever been. It’s a true 50/50 collaboration; vocals, melodies and arrangements. And for me, I grew up singing R&B and soul, some of my favorite singers are Sam Cooke and Etta James, so I really wanted to try and bring that R&B/soul influence without doing it in a way that felt foreign or out of place. I think using my voice in the way that I naturally like to use it, by pushing more air or singing more fully, creates this really cool interplay with Derek’s production.

As a touring musician myself, I love road stories. Any batshit crazy tour stories you’d like to share?

We were playing in Georgia and Derek hit me in the head by accident with the head of his Jackson guitar, which is like a weapon, very pointy [laughs], and he caught me in the temple and I started bleeding while singing. I did all of “Rill Rill” with blood dripping all down my face. I was pretty convinced that I was going to die, and I just thought ‘Fuck it, I’m going to go out with a bang. I’m gonna crowd surf, and if I die I’m just going to die doing something that I love.’ That was a bit traumatic.