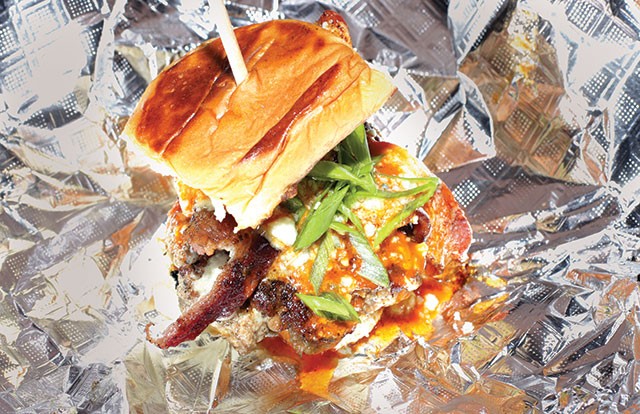 It’s hard out there for a food truck. After you factor in the cost of operating a truck, the nuance of finding that secret sweet parking spot and the Texas heat (which, yes, has been mild this year, but just try tending to a hot grill in a teensy trailer in 90-plus-degree weather), it’s easy to see why the number of operational trucks is in constant flux.

While some trucks flourish by offering ethnic cuisine, others, like the late, great Rolling Pig struggle to gain a loyal following despite having stellar menu items. More and more trucks stick with menu items that don’t ruffle any feathers.

With Slider Provider, chef/owner Sean Phoenix is definitely taking the safe route, but in a way that still delivers big taste.

After eight years as a manager for the Fox and Hound, Phoenix decided to give owning his own food truck a shot. He focused his concept on sliders, a relatively trendy food phenomenon (are they popular because we think we’re eating less, or are they just too cute not to eat?). A self-proclaimed burger fanatic, Phoenix figured sliders were a good way to create something easy to eat and easy to make inside a food truck, and were also a great way to provide a lot of variety to customers.

His latest menu, which changes frequently, hones in on that diversity with 10 menu options, more than you’d usually find from any local truck. Choose between the flavorful three-ounce beef patty that’s just well-done enough to still be juicy (it must be difficult to make any slider medium-well or below), or the moist chicken breast as your slider base. The beef definitely holds it’s own. Don’t get excited about sides: the trailer carries Miss Vickie’s or Lay’s potato chips to accompany the sliders.

The Goobster, an amalgamation of traditional sandwiches with sharp cheddar and bacon topped with crunchy peanut butter and grape jelly sounds dubious at first, but the combination works and adds playfulness to every bite without overpowering or turning into a separate sandwich.

Other combinations include the Buffy, with spicy garlic wing sauce, bleu cheese, scallions and bacon (get it?). Even as a fan of the stinky bleu, the amount used for a slider was a little heavy-handed. The Lil Kahuna with creamy Muenster cheese, bacon, pineapple-jalapeno mayo and, you guessed it, grilled fresh pineapple was a highlight. The only thing that could have made this slider better would have been the addition of Spam to complete the Pacific Islander feel.

While Phoenix has found a small niche doing lunchtime gigs in the Medical Center area through the San Antonio Food Truck Association, he’s also made inroads in the bar scene, parking at the Brooklynite or Irish Pub on weeknights. It’s in these nighttime venues, after a few brews or Missionary cocktails that messy sliders like the Bean-go with it’s refried black bean spread, habanero queso, fresh pico and Cool Ranch Doritos, really shine.

To be fair, the sliders are only wee in name. The runaway favorite, Chuck Norris, is a mouthful of caramelized onions, American cheese (obviously), bacon, a slight bit of heat from the Sriracha ketchup and fresh onion, lettuce, tomato and pickle slices. At $8.50 (just over $9 with tax), two sliders and a drink or chips provides a surprisingly hearty answer for big appetites.

Very mobile, so follow them on Facebook, facebook.com/SliderProvider, or Twitter, @ProviderSlider, or call (936) 718-3315
Best Bets The Goobster, a playful combination that pairs fresh accoutrements with crunchy peanut butter and grape jelly. The Chuck Norris roundhouses your taste buds with American cheese, bacon, caramelized onions and Sriracha ketchup.
The Skinny These tasty bites are diminutive only in name; Slider Provider delivers quarter-pounders of taste in pint-sized packages.
Prices $-$$