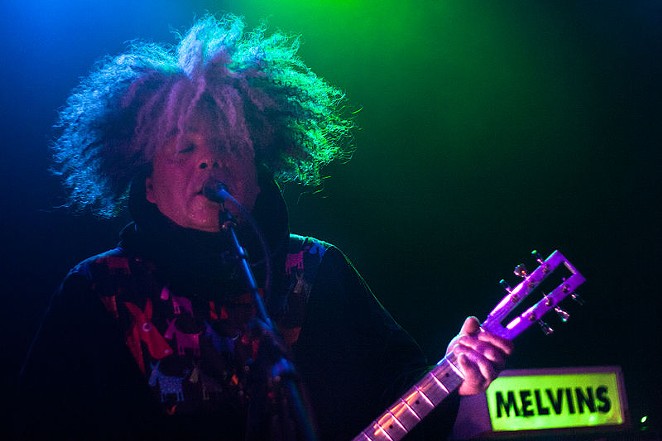 "They're a force of nature. Not even a band—a force of nature," says Faith No More's Mike Patton in the aptly titled film, Collusus of Destiny, which documents the career of the Seattle sludge metal gurus the Melvins.

Led by its core duo of guitarist Roger Osbourne (aka: Buzz/King Buzzo) and drummer Dale Crover, the band took shape in Crover’s family's garage in 1983. Since then, they've seen a number of bassists come and go. In fact, the band's new album that debuted this past June, Basses Loaded, features six different bass players — including Jeff Pinkus of the Butthole Surfers, Steve McDonald of Red Kross, and Krist Novoselic of Nirvana, all of whom have played with the band live at some point in the past decade.

The origins of the sound that produced such a long career and cult-like following are tough to pin-down. On one hand, the band started off covering Jimi Hendrix, meanwhile Buzz has also said that both the punk band Black Flag and heavy metal rockers Black Sabbath had a hand in some of his guitar style. Which makes sense. You can sense a punk attitude in the unorthodox structures of the songs and a dark, wry humor peeks through, with the riffs that pack the punch of a Sabbath power-chord. The result is a genre typically described as sludge metal, combining heavy rhythms with slow tempos, a dark aura, and aspects of hardcore punk.

The sound also had a profound influence on friend and fellow Washingtonian resident Kurt Cobain, whose demos were clearly influenced by tracks produced by the Melvins around that time. Dale and Buzz would even play in some of Cobain’s early projects, Fecal Material and Brown Towel, before sharing a vinyl single with Cobain’s newest project, Nirvana. While Cobain's Nirvana would go on to become the face of the 90s grunge movement, it’s hard to imagine any of that happening without the influence of the Melvins.

With Nirvana’s rise to international fame, Seattle’s music was thrust into the spotlight, and the attention soon turned to the Melvins, who eventually inked a deal with Atlantic, leading to the band's first mass-distributed release of the 1993 album Houdini. Two more albums would follow before Atlantic dropped the sludge kings, the exposure gained them a large and devoted fan-base across the country.

And by no means did Melvins peak with their series of major-label releases. Many more records, tours, and collaborations would follow. And as the band tours through San Antonio celebrating their 33 years in existence, it's clear they have more trails to blaze, sludge to explore, and venues to sonically obliterate.