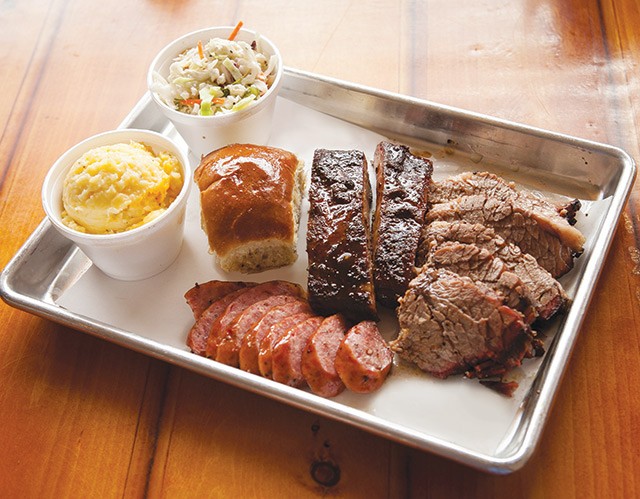 This is Texas–barbecue doesn’t have moments, it has never-ending eras. But it seems business owners are zeroing in on the current ’cue movement as of late. And the good ’cue is moving closer to Downtown: Dady stretched his legs with B&D Ice House, Augie Cortez (of Augie’s Barbedwire Smokehouse) is staking his spot on Broadway with Augie’s Alamo City BBQ this summer and two buddies are opening Alamo Ice House off North Alamo in the coming weeks.

So it’s really no surprise that a visit to Conger’s Smoke Shack’s first brick-and-mortar location means waiting in line amongst other ’cue-hungry patrons. That’s been the case since day one.

Owner, chef and ’cue connoisseur Chris Conger originally catered to the ’09 set out of a trailer parked on Nacogdoches inside Loop 410 since 2011. The trailer took a short break just before this review, but Conger expanded the operation in late March at 3714 Broadway, smack dab in front of the Witte. It parallels Augie’s proximity to the San Antonio Zoo and makes for an interesting scene on weekends. Although employees at the counter are chipper and the kitchen is quick to ring up those massive orders, you are in for a lunchtime wait, even on weekdays.

Again, there’s a reason for such madness–the ’cue is good and the digs are comfortable. The Smoke Shack kept meals and meats on the menu while adding snacks and more sandwiches inside a clean and friendly environment (the Mason jar lighting is an interesting choice, but I’ll let it slide), and prices aren’t bad either.

For my first visit, maybe a day or so after opening (can you blame me?), I stuck with my usual pick of sliders. Available in two options (one slider and two sides for $8, two sliders and two sides for $9), the not-so-mini sandwiches come with your choice of brisket, turkey, pulled pork or sausage. My chosen meats, turkey and brisket, were smoky and moist, and the dinner roll was buttery and toasted just so. One is more than enough, but you’ll definitely reach for the other … that is unless you start taking down that mac ’n’ cheese.

Made using a corkscrew noodle, the mac is matched with a luscious cheese sauce that covers each bite and the occasional bit of sausage. It’s great and all, but the okra is a must-have. Lightly coated and fried, the okra retains its vibrant green color without any of that signature goo. And if you’re looking to head in a slightly healthier direction, the bright vinegar slaw is probably your best bet (leave the garlicky mashed potatoes for a cheat day).

Yes, the menu does include larger sandwiches … but I’m not Man vs Food’s Adam Richman, especially considering the $10 Big Dog offering with a link of sausage, brisket, pulled pork and slaw. They’re ginormous meals made with the same ingredients used in the sliders. On my next visit, I decided instead to go big with a three-meat barbecue plate of brisket, chicken and ribs, and an additional sausage link ($2 per link), which served as three meals over the course of a few days. The Smoke Shack doesn’t skimp on portions–that’s for sure.

At $14, the plate is downright daunting. My chicken was seasoned well, albeit just a bit dry. As a fan of lean brisket, I loved not having to navigate my way through chunks of fat; the sausage was flavorful and abundant, but the ribs stole the spotlight. Just a step away from falling off the bone, the pork offering was peppery and tender, while the bark is just sticky enough and sweet. Your next visit could get messy.

If the packed parking lot and dining room are any indication, Conger and his growing staff have picked up a few more fans since the days at Nacogdoches, and you should add your name to the list.