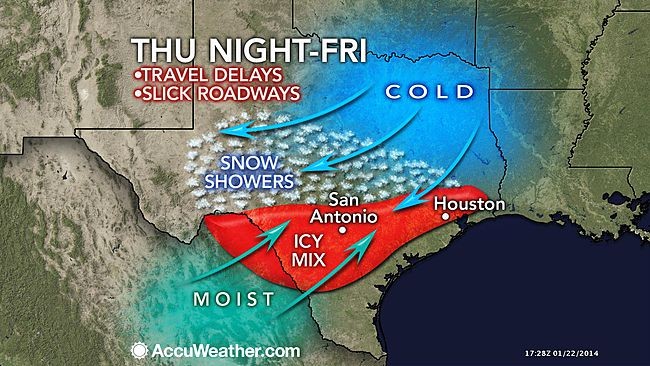 Welcome to Snowverblown 2014, where San Antonio freaks out because water falls from the sky in a different state of matter than we’re typically used to. Much of the Lone Star State was brought to a standstill by a frigid arctic front that brought a multiplicity of winter precipitation. Areas to the north were dusted with bona fide snow. San Antonio, on the other hand, got a smattering of sleet and frozen precipitation and an icy coating on our streets and vehicles. They say everything is bigger in Texas, so naturally there was colossal panic over an overnight blast of winter weather. Basically, most of San Antonio abandoned all hope and called it a day before the day even began, despite the fact that most of the ice will melt by mid-to-late morning. So how did San Antonio weather the winter storm? By collectively rushing to various social media outlets to express wonder and frustration and every emotion in between (or to post pictures of their ice covered cars). Here’s how the night unfolded. The Hashtags Some took on the noble task of uniting the city under a clever hashtag, so that we would feel less alone in this frozen wasteland. TPR reporter Joey Palacios (@Joeycules) suggested #raspageddon because get it? San Antonio has a lot of Mexicans, and Mexicans eat raspas, and raspas are made of ice, and the city was covered in ice? It’s clever wordplay as a coping mechanism.

@fvaraorta I've been trying to get #Icepocalypse trending, but alas, it has not gotten any traction. — Jim Bob Breazeale (@jbbreazeale) January 24, 2014

There was also #aydiosfrio, which, while hilarious, didn’t have the influence of the local media behind it. Also floating around was #snowmageddon, but it lacked local color and, let’s be honest, creativity.  The Informative The night was not without its perils. Fortunately, local media outlets and agencies were working tirelessly to update those who had the good sense to stay indoors. Just as people were seeking refuge in their homes, the storm decided that it was silly for you to wait out winter’s wrath with a modern convenience like electricity. Over the course of the evening, upwards of 15,000 CPS Energy customers lost power.

TxDOT San Antonio rightly figured driving on the icy bridges would quickly turn into a deadly amateur hour, so they closed most of the freeway intersections and major overpasses.

Meanwhile local news outlets were furiously updating their feeds with the latest in closures and delays. Here is the gist: If you’re a kid, you didn't have to go to school today. If you’re an adult, you’ll probably had to schlep to work at a later hour. The Reactions So how did people react to the storm? Well, some choose to panic:

San Antonio is going through the craziest weather right now oh my god what is this — emily || 241 PÆSTA (@maliksmacaroni) January 24, 2014

While others thought the dramatics weren’t necessary:

San Antonio is dealing with a rare event, it's something scientists refer to as "ice." — Ari Temkin (@arisports) January 24, 2014

Freezing rain in San Antonio is basically the apocalypse. Schools are closed, businesses are closed, heck there are probably riots going on. — Judson Hastings (@HastingsJudson) January 24, 2014

@SanAntonio has a sNOw day. That's a snow day with school closures but no snow. #sNOwday — Anthony Cobbs (@PastorAC) January 24, 2014

Some bore witness to nature’s fury:   While others made light of the situation:

And there you have it. Snowverblown 2014 has come and gone, and without any actual snow. What have we learned? Absolutely nothing. Expect the same extreme caution and frantic reaction the next time ice falls out of the sky. It’s the San Antonio way.