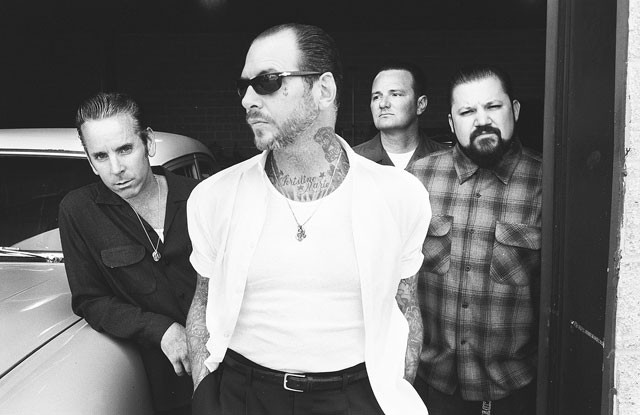 They're old school rock 'n' roll rebels with swaggering attitude, a rootsy backbone, and lots of loud guitars. Social Distortion may not have aged like wine, but they were never a fit for the cask. Their bathtub brew was designed gruff — mirroring frontman Mike Ness' own voice and character — and time hasn't changed that: the group's essence has only deepened these 34 years.

"I attribute it to two things — luck and brutal determination," Ness said from his Southern California home. "I'm a stubborn motherfucker. Giving up never was an option."

Social Distortion is about to celebrate the 30th anniversary of their seminal '83 debut, Mommy's Little Monster. It's a testament to Ness' perseverance that the band's survived more hiatuses than television's fall programming schedule.

First, in the mid-'80s Ness sunk into addiction and brief incarceration, before returning with a new lineup and 1986's Prison Bound. It brought the country and rockabilly he'd grown up with into the old school punk of their debut. They jumped to the majors for a handful of hits and two gold-selling albums — 1990's self-titled Epic debut and their 1992 follow-up, Somewhere Between Heaven and Hell. Then, a year after 1996's White Light, White Heat, White Trash, Ness' best friend/co-founding guitarist Dennis Danell dropped dead in his driveway from a brain aneurysm.

Ness explored a solo career and the band wouldn't reform until 2003. They released the middling Sex, Love and Rock 'n' Roll in 2004, but still it was nice to have them back. It'd be another seven years before he followed that up with last year's terrific Hard Times and Nursery Rhymes. He promises long breaks won't be the case going forward.

"I've kind of agreed to take on this really busy work year knowing that I was taking the next five to six months off next year to [finally] use the studio I just built," he said. "Literally every time I get home something gets done and I have to leave. The floors get done — back on tour. I haven't had a chance to really use [the studio] yet, so when I take those six months off I'll be writing."

The addition of drummer David Hidalgo Jr. (son of the Los Lobos guitarist) prior to the last album's release made a difference in the band's energy and sound.

"He made the songs sound the most natural and organic," Ness said praising Hidalgo's great strength for intuitive groove. "If it doesn't have a groove you're just bashing through chords. I realized that in the late '80s early '90s, after just being frustrated with the way we would sound after shows."<

The band's endurance is a great American success stories, but Ness takes nothing for granted. "

It's kind of a phenomenon," he laughed. "We're really more popular now than we were five, 10, 15 years ago. I wish I could say it was a really cool marketing plan we worked out, but we don't know what we're doing. We just do it."