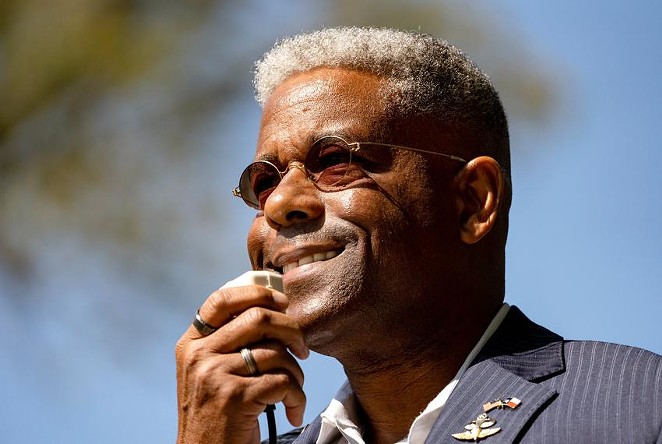 A fight has broken out among Texas Republicans over Gab, the embattled social network favored by the far right.

The state GOP made clear Thursday it would not delete its Gab account after vice chair Cat Parks called on it to do so two days earlier — and got backup from Gov. Greg Abbott, who said "anti-Semitic platforms like Gab have no place in Texas." That sparked fierce criticism from the company — and new questions from fellow some Republicans about Abbott's own commitment to fighting perceived censorship by social media giants.

The party has had a Gab account since at least January, when GOP discussion over social media policy was at a fever pitch in the wake of Twitter's decision to ban outgoing President Donald Trump after the deadly U.S. Capitol riot.

Gab promotes itself as a "free speech" alternative to social media behemoths like Facebook and Twitter. It has become a haven for neo-Nazis and other extremists, though, and it got national attention in 2018 when the man who fatally shot 11 people at a Pittsburgh synagogue had posted anti-Semitic messages on the site beforehand. The company itself has a history of trafficking in anti-Semitic tropes.

Earlier this year, Gab was among the alternative social media sites where Trump loyalists plotted the storming of the U.S. Capitol.

The Texas drama surrounding the platform began Tuesday, when Parks, who has been taking steps to differentiate herself from chair Allen West, issued a statementcalling on the party to deactivate its Gab account. She said she looked into the site after "multiple grassroots Republican activists reached out with concerns" and found "several comments on [the Republican Party of Texas'] posts contained anti-Semitic and racist tropes." She said she "noticed that this was a common theme on Gab."

"The Republican Party of Texas will not tolerate anti-Semitism and racism to proliferate under our watch," Parks said, adding that Gab "is not a viable or healthy outlet for RPT to share our message of opportunity, liberty and personal empowerment."

On Wednesday evening, seemingly out of the blue, Abbott gave Parks an assist, tweeting a video from his official account in which he appeared alongside GOPstate Reps. Craig Goldman of Fort Worth and Phil King of Weatherford.

It was not clear what legislation Abbott was referring to, but Goldman and King are the authors of an Abbott-backed 2017 law that required state contractors to verify they are not involved in any boycotts of Israel. After a federal judge blocked the law in 2019, Abbott signed a bill narrowing its scope.

Abbott's video with Goldman and King prompted a critical statement from Gab CEO Andrew Torba, who called the governor's Gab attack "despicable and false." Noting the "Texas GOP itself is on Gab with a verified account," Torba disputed that the site is an "anti-Semitic platform," saying Gab "protect[s] the political speech of all Americans, regardless of viewpoint, because in this age of cancel culture nobody else will."

Torba — as well as other Abbott critics — also pointed out that just six days ago, Abbott traveled to Tyler to throw his weight behind legislation that he said showed Texas was "taking a stand against Big Tech political censorship."

On Thursday afternoon, the Texas GOP indicated it would not heed the calls to abandon Gab. A tweet from the party account said it supports "the 1st Amendment, including free speech platforms & VC [Parks'] right to criticize such."

"TexasGOP has no plan to deplatform from any of our social media accounts," the tweet said. "The 1st Amendment still shines brightly in the Lone Star State."

The dustup marks another chapter in tensions between Abbott and West, a potential primary challenger to the governor in 2022 who has been critical of his response to the coronavirus pandemic. The episode also shows more daylight between West and Parks, who has sought to pave her own path at the party as West's sharp-elbowed leadership has miffed some fellow Republicans.