Sofia Coppola’s 'Beguiled' is a Triumph of Sharp, Subtle Performance 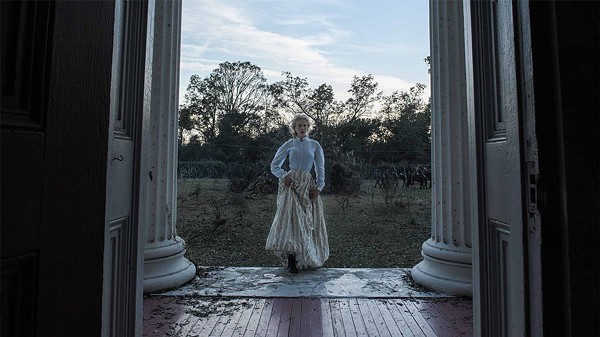 The Beguiled is a dramatic exploration of morality during war, but it’s not told on the battlefield or anywhere near the front lines. Rather, director Sofia Coppola’s (Lost In Translation) visually drab film is set mostly inside a Virginia boarding school for girls during the Civil War. By zeroing in on the location, and with the knowledge that the audience is aware of what’s going on in the immediate vicinity, Coppola effectively heightens the danger and complexity of the narrative.

It’s 1864. While on a walk, young Amy (Oona Laurence) happens upon wounded Union soldier John McBurney (Colin Farrell), who’s been shot in the leg. Alone and dying, kind Amy brings John back to the seminary, which is run by Martha Farnsworth (Nicole Kidman). Being a good Christian, she instructs her colleague Edwina (Kirsten Dunst), as well as teenage Alicia (Elle Fanning) and the younger Jane (Angourie Rice), Marie (Addison Riecke), Emily (Emma Howard) and Amy to care for John, because “he’s never going to make it.”

But he does make it, and what ensues is an intriguing look at human nature, sexual desires, and betrayal. After three years of their fathers and brothers at war, now there’s a man staying in the house. Not just any man: an enemy, one who Alicia makes it a point to refer to in disdain as a “blue belly” and “Yankee.”

Slowly, though, John grows on them. He smiles, is kind, doesn’t take them for granted, shows appreciation. Martha makes sure he knows he isn’t wanted, but her actions belie her words. The females know the right thing to do is care for and protect him, but they also all feel drawn to him, so an unspoken competition for his attention ensues. He welcomes and encourages all of it.

What’s fascinating about Coppola’s script, which she adapted from the novel by Thomas Cullinan, is how each female feels drawn to John in different ways for different reasons depending on her age. You can see the temptation on Martha’s face as she gives an unconscious John a sponge bath. Edwina yearns for a way out of the seminary, and feels a connection that he seems to reciprocate. Alicia’s sexual awakening corresponds with John’s arrival, making her curious to explore things she previously didn’t think about.

In all instances, including those of the younger girls, The Beguiled is a triumph of performance subtlety. Take the scene in which the women play a song for John. Note the way Edwina and Alicia look at him, and the way Martha sees them looking at him. This is all done with the smallest of glances and timely editing, no words needed. And yet it says so much.

How the situation evolves is daring and unexpected, not to mention twisted. You’ll think you know where it’s going, and you’ll be wrong. That’s part of the fun. It may be a bit of a slow build in the beginning, but as this happens, the production and costume design, as well as the cinematography and sounds of cannons firing off in the distance, are creating the proper mood for what’s to come. Sure enough the last third of The Beguiled packs a wallop, and at the end, you’re quite taken by what you’ve just seen.