The sun is ripe for harvesting in San Antonio. The numbers bear it out: San Antonio ranks as one of the nation's top 10 cities for solar production and solar energy potential.

But solar in SA will soon change. Funds for the industry-leading rebate from CPS Energy, which engendered so much growth, may evaporate. And almost simultaneously, CPS plans to launch a pilot program that would allow customers to lease out their rooftops to the utility in exchange for a discount on their bill.

The moves have created a deep rift in San Antonio's solar energy community. A group of solar installers argue that CPS' actions will put them out of business, stifle innovation, limit consumer choice and create a solar monopoly. CPS officials counter that the idea is to take solar to as many people as possible.

"All the installations now require the consumer to come up with a lot of up-front cash to participate and that really limits it to ... a small number of folks," Raiford Smith, vice president of corporate development and planning for CPS, told the San Antonio Current. "How do we broaden that appeal?"

The debate has ramifications for the entire solar industry. As the nation's largest publicly-owned utility, CPS' actions could set a new precedent for the booming technology. Members of the solar community across the country are watching San Antonio to see what happens, according to Kim Sanders, a spokesperson for the Alliance for Solar Choice, a national solar industry group.

"There's a concerted attempt by utilities across the country to undermine effectively what is the first competition they've seen in quite some time," Sanders said. "Utilities are probably egging one another on trying to see these programs through."

San Antonio's path to being a top solar city leads back to one man: William Sinkin.

Sinkin, a long-time San Antonio civic leader, founded the advocacy group Solar San Antonio in 1999. With seed funding from CPS, Sinkin spread the solar gospel throughout San Antonio for nearly two decades. Winning support from CPS for a rebate was a major victory, according to Sinkin's son, Lanny, who took the torch after his father died last year at 100.

"There was an uphill education process of getting CPS Energy involved," Lanny, who served as the group's executive director from 2010 through earlier this year, told the Current. "But we've been generally successful through the years in getting CPS to pay the rebate and keeping it alive."

Since then, the rebate has been the lifeblood of the San Antonio solar industry, defraying some of the hefty upfront costs that rooftop solar systems require.

CPS currently offers a rebate of $1.60 per watt for residential customers. The average residential solar system in San Antonio costs about $21,000 before a local rebate and federal tax incentive, which can shave off over $10,000, depending on equipment costs.

The rebate lured many solar installers to the Alamo City, including Patrick Attwater of One80 Solar.

Attwater, originally from Kansas, brought his solar installation business to San Antonio early last year after scouting the country for the best spot. Business was brisk, with One80 Solar netting commercial clients such as Alamo Beer Company. He described solar's long-term growth potential as a "hockey stick curve."

Despite the success, Attwater and his industry colleagues say they now find themselves stuck. The rebate is set to run out at the end of this year, just as CPS will roll out a pilot program leasing rooftop space from homeowners.

Ben Rodriguez, a spokesperson for San Antonio Solar Alliance, a new group of about two dozen local solar installers, estimated that losing the rebate would cost the industry at least 400 jobs.

"It's a monopoly replacing an entire marketplace," Rodriguez said. "I find it very difficult to accept the line that this is what's best for the citizens of San Antonio." 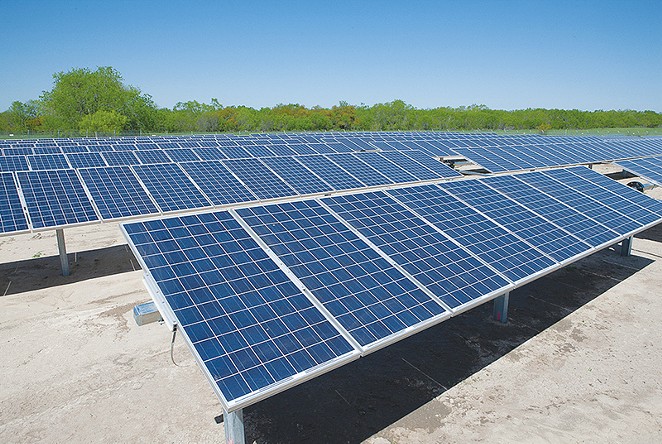 But CPS officials argue that the lease program, along with another program that will allow customers without suitable rooftops to buy off-site solar panels, will allow more San Antonians to embrace solar. Smith, the CPS executive, said that the "installer community is going to have more work than they can possibly manage."

Under the proposed program, which will likely roll out in October, CPS customers would lease their roof to the utility for solar panels in exchange for a credit on their bill. Customers would incur little or no up-front cost. The rooftop program will fund 10 megawatts of power, which Smith estimated would take about a year.

"The programs that we're offering will actually increase total solar installation for San Antonio," Smith said. "I understand [installers'] concern about change in the marketplace. I don't wish drama or negative change on anyone, but on the other hand, I think the change that we're envisioning here is better for the community, better for installers and better for consumers."

CPS has already selected the third party outfit slated to administer the lease program, but Smith could not reveal its identity because of pending negotiations.

San Antonio Solar Alliance members objected to the idea that the program would be free. One installer likened it to leasing a car versus owning one — a cheaper option up front but with fewer long-term benefits. Residential solar systems typically pay for themselves in 10 years or less. Commercial systems can pay for themselves in less than five years.

"[Consumers are] getting a sour deal with the move away from a marketplace and solar ownership. These systems aren't 'free' because CPS takes almost all the benefit of what a solar array offers," Attwater said in a statement to the Current.

In addition to marketing and installation, the third party selected by CPS would also be responsible for buying equipment, a major profit source for installers.

Last year, the Solar San Antonio board approved a resolution supporting the rooftop lease program while also recommending that the rebate be extended and the creation of a "broad based solar and community working group."

But in a letter to the board, Sinkin warned that if "CPS Energy did follow through on its plan to terminate the rebate at the end of 2015, there would be no solar installation industry in San Antonio after 2015" because CPS would turn into an unfettered monopoly.

San Antonio Solar Alliance's top goal now is to extend the rebate through at least 2020 and work with CPS to find a long-term solution. The group will need to convince CPS officials to manipulate a program called Save for Tomorrow Energy Plan (STEP).

The program funds a suite of efforts that encourage energy efficiency among CPS customers. In addition to the solar panel rebate, the programs include incentives for high-efficiency air conditioners, smart thermostats and refrigerator recycling. The program's total cost is $849 million.

The goal of STEP is to save 771 megawatts — the equivalent of a large power plant — of electricity demand through 2020. CPS Energy reports that the program has saved about 345 megawatts so far.

But the amount earmarked for solar rebates, about $30 million, is already spent, according to Smith. Extending the rebate would require taking funds from other STEP programs.

"It's not just moving money around from one bank account to another," Smith said. "It would be taking away from some of these other aspects of the community that could benefit from energy efficiency."

Solar installers argue that's because of the program's success and popularity and that allowing the rebate to peter out would punish potential solar panel owners. While negotiating with CPS, they've also brought their pitch to the city council.

Councilman Ron Nirenberg, an alternative energy proponent, said the best solution is whatever results in the most effective and efficient proliferation of solar throughout San Antonio.

"I would want to make sure that when we provide solar through our utility, that we have some options to work with," Nirenberg told the Current. "The overall market concern is what does this mean for solar in San Antonio if CPS essentially owns and operates the residential market? I understand that."

Nirenberg said that the council will likely hold a briefing on the issue in either late September or early October. In the meantime, San Antonio Solar Alliance members plan to continue lobbying CPS for a more predictable marketplace. Even if that means painful change, according to Smith, the public utility's long-term aim is similar.