Sold out? MLK march strong in numbers, but what about its message? 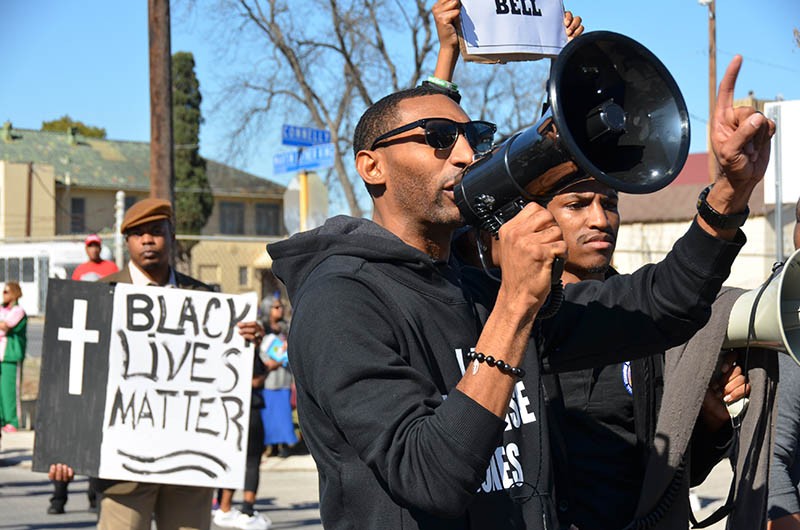 Dozens of members of an activist group that first galvanized on social media joined San Antonio's massive march on Monday honoring the legacy of Martin Luther King, Jr. But this was far from kumbaya for them.

The activists, members of SATX4 and numbering about 200, joined the Alamo City's annual celebration of the influential civil rights leader, held on the federal holiday honoring his dream. Based on aerial coverage through its choppers, San Antonio police estimated overall turnout of the city's 26th event at a staggering 175,000 to 200,000 marchers.

Spurred by #BlackLivesMatter Twitter hashtag, group members said they wanted to "reclaim" King's dream and call attention to what they deem as unjust abuse of black youth at the hands of police. They also wanted to highlight the country's lingering economic inequality and concentrated poverty afflicting the country's minority communities.

Jasmine Kent, a 23-year-old San Antonio woman, remembers bursting into tears when she learned that white officer Darren Wilson would not be indicted for the killing of unarmed black man Michael Brown in Missouri. Like millions around the country, she took to social media, where she found other local activists and organizations equally outraged about the case. Since then she helped found SATX4, a grassroots social justice group that has hosted small rallies around town to protest the killings of black men like Brown, Eric Garner and San Antonio's 23-year-old Marquise Jones.

"We're here to empower the urban civil rights movement," Kent said as she marched on Monday alongside fellow activists, who sported black T-shirts and signs reading "I am Michael Brown" and "Hands Up, Don't Shoot."

Kent added: "First it was voting, and now in our world you can see injustice in education, housing and policing."

Between groups of government and civic leaders and a sea of T-shirt-clad employees from companies like Wells Fargo, H-E-B and Valero, the SATX4 group, which grew organically as the march went on, staged a "die-in," suddenly falling to the ground and lying on the street for almost 20 minutes as a solemn commemoration of the controversial shootings. 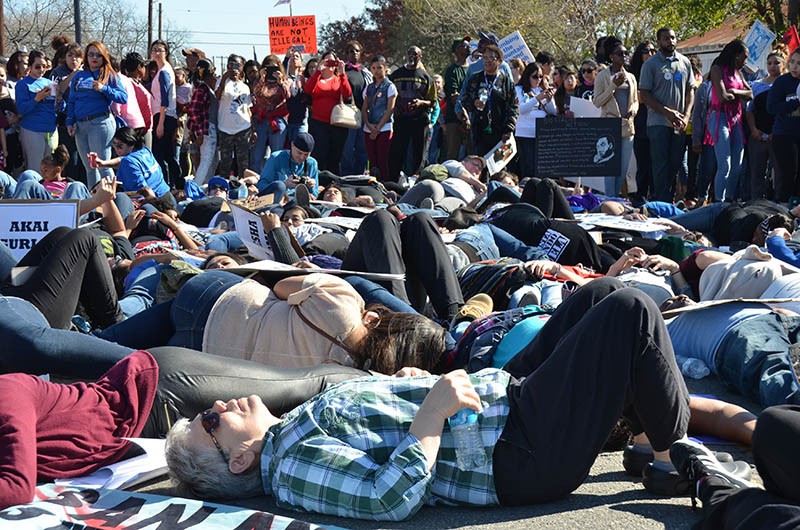 "From Ferguson to SA, killer cops have got to pay," marchers chanted before dropping to the ground.

City officials and volunteers take great pride in the event. Leading up to the march, San Antonio hosts the 12-day "DreamWeek," a series of dozens of community and cultural events around town such as lectures, summits and music shows, meant to honor the influence and legacy of the civil rights leader.

"We've done this for (25) years," said Bishop David Copeland, who serves as chairman of the MLK Jr., Commission, the City-County volunteer organization that coordinates the march. "We are a community that knows how to come together at certain moments."

Community leaders hope, though, that the high attendance is not in vain. While it's important to celebrate King's vision on this day every year, Oliver Hill, president of the San Antonio chapter of the NAACP, the country's oldest black civil rights group, wants elected leaders, companies and marchers to put King's dream into daily practice.

"I think a lot of times, we have a belief but it comes to putting it into practice, that belief flies out the window," Hill said before the march. He wants to ensure companies and participants are doing it for the right reasons rather than a promotional opportunity or "just for show," he said.

"What have they done for the community?" he reflected. "It just makes me wonder if there isn't a way that we all collectively ask what we can do to improve conditions for people that are not well off, and then at the same time, ask each company to look within their own and ask what they are doing to ensure that people are able to move up?"

March sponsors and attendees run the gamut, from families and students to groups like the AFL-CIO and community colleges to H-E-B and Valero. Local social justice groups such as the Esperanza Peace and Justice Center and Southwest Workers Union question the heavy corporate presence at the city's celebration, which they see as being counterintuitive to the social justice and grassroots push of Dr. King's movement back in the 1950s and 1960s.

The corporate presence was definitely palpable at the march, such as the ubiquitous presence of company banners and T-shirts. And at the end of the march, the event takes on a quasi-fair atmosphere, with food vendors galore offering various treats such as funnel cakes.

And then there's the additional concern of folks using MLK Day as their one day of the year to become active in the community, only to essentially disappear the next day.

"It's a kick in the face when it comes to really addressing those issues," said Diana Lopez of SWU. "The one day that they talk about honoring civil rights and the work that happened during that time just happens doing those few hours and for the rest of the year it's being ignored."

The MLK Commission's Copeland said the key to fully achieving King's dream is continued community dialogue. He said the Commission wants to host other events throughout the year to maintain the conversation.

"What tends to happen is that people go back to their various silos and they continue to do what is easy for them and make the assumption that just about everybody has the same as they do," Copeland said.