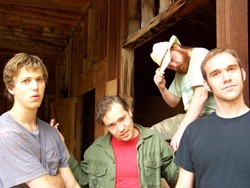 
Sole was hatched the year Elvis overdosed — 1977 — in the far northeastern city of Portland, Maine. His musical arc might be described as a series of battle raps whose range of targets has gradually widened — the forceful language of overconfidence vital to classic battle rap populated his post-adolescent albums, each mixing traditional rap aesthetics with a more original and highly poetic approach. Though Sole spent most of his career working with celebrated producers, by 2005 he was looking for a working relationship with a talented group of musicians. He encountered Skyrider on tour and was intrigued by their sound—sparks flew and the band began playing and recording intensely at Sole’s studio. $10, 8pm, The Crossing, 1818 N. Main, myspace.com.neversaydieproductions.