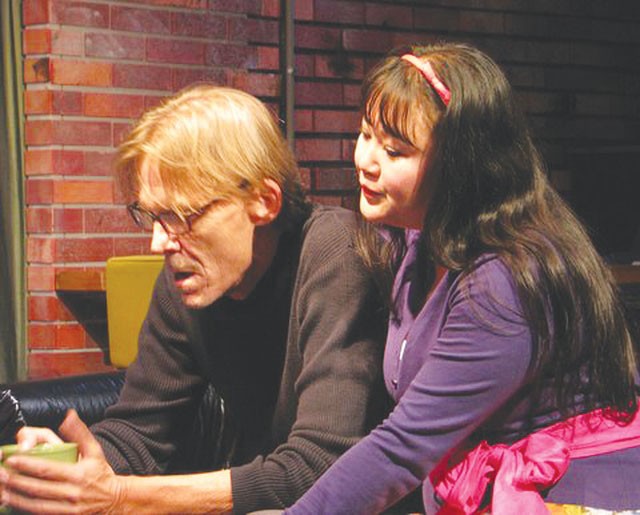 It’s easy to underestimate playwright Donald Margulies, even with his Pulitzer Prize (for the delicious Dinner With Friends) and his influential post as professor of playwriting at Yale. For starters, it’s because, on paper, his dramas might seem slender, improbably tidy, and — depending on your tastes — somewhat bourgeois: oh-so-middle-class professionals with oh-so-middle-class problems. In his recent Time Stands Still, however, Margulies makes a dramatic virtue of his characters’ sheltered lives: the two quasi-married protagonists, a journalist and photographer, are literally knocked out of their comfort zone while covering the war-torn Middle East. Margulies thus juxtaposes the privileged position of these American observers with the wretched conditions of the observed: victims captured on film as bullet points (so to speak) for larger, media-driven arguments. Indeed, Sarah, the photographer, waxes grandiloquent about her beautiful, prize-winning frames in which “time stands still” — but only, of course, for the lens, never for the suffering subjects. (About particularly horrific photos — of burn victims and dying children — the play restates a fundamental ethical crisis of the modern era. What’s more disturbing: the eye of the camera or the hand of the photographer?)

The Cellar’s production, the first of its season, is a well acted and smartly paced affair that still works better as a play of ideas than as a character drama per se. As Sarah and James settle into their Brooklyn digs while recovering mentally and physically from the shrapnel of Iraq a visit from seasoned editor Richard and his nubile girlfriend Mandy sets into motion the gears of conflict. Richard transparently represents American commercial interests — how best to package, barcode, and sell suffering? — while the ditzy Mandy (hilariously and superbly played by Jenn Harris) unwittingly punctures the aesthetic arguments of both journalists.

As in Dinner With Friends, Margulies then plays these two couples off each other: while Richard and Mandy seem, at first, hopelessly mismatched, their infatuation throws into sharp relief the troubled relationship of the journalists. Mindy Feedham has the most difficult role: wounded and crabby, Sarah is surly almost to the point of antipathy, a problem in the first act. (I kept wondering, what does James see in her? Feedham could play against the text a bit more.) But Feedham comes into her own in the play’s more substantial second act, in which Sarah finally drops her bullet-proof persona; the playwright exposes a troubled psyche that even a camera can’t capture. Anthony Cortino contributes good work as Sarah’s haunted bedmate; Bill Gundry likewise impresses as the love-struck editor, who aims to generate children as a defense against the horrors of global devastation — and middle age.

Production values are strong (though not the proofreading — the playwright’s name is mangled as David Marguiles in the program). Frank Latson and Alfy Valdez’s detailed and naturalistic set — with worn and weary bricks stretching out into the wings — invites us into the domestic space of a couple who has traveled everywhere but lived nowhere: it’s a crash pad, not a home. As director, Latson finds moments of beauty in the text — for all of the screaming, it’s a fundamentally elegiac play — though the ending seems rushed; I don’t wish to give away the final moments, but Sarah’s concluding will-to-photograph doesn’t register with quite the impact it should.

But these are quibbles. After last year’s bizarrely nostalgic “All-Texas season,” it’s good to see the Cellar back in fine form as it programs the sort of intelligent, high quality plays that the rest of America sees, and San Antonio generally doesn’t — as if time indeed stood still. Two thumbs up. •