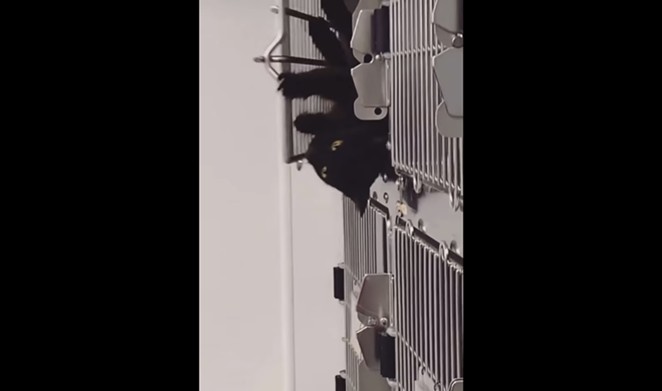 A Lone Star State feline just put out an audition tape for the next Mission Impossible sequel.

Located an hour south of San Antonio in Jourdanton, Atascosa County Animal Control found itself in possession of a particularly crafty cat who learned how to escape from its holding cages.

On Tuesday, the shelter posted a Facebook video of the acrobatic animal's Houdini-worthy breakout.

"Every now and again we have above average pets that come thru the Atascosa County Animal Control," the shelter said in its Facebook post. "Such is the case with this resourceful cat. She figured out how to get out of our escape proof cages."


Set to the Mission Impossible theme, the video shows a black cat's paw poking through the cage bars and pushing upward to unlatch the door. As it swings open, the cat, who was lying on her back, flips over using the door as leverage and jumps down from the cage. Voila!

For anyone looking to match wits with a bold and brainy pet, the shelter has placed the "escape artist" cat up for adoption. Though unnamed, her shelter ID number is 6545.