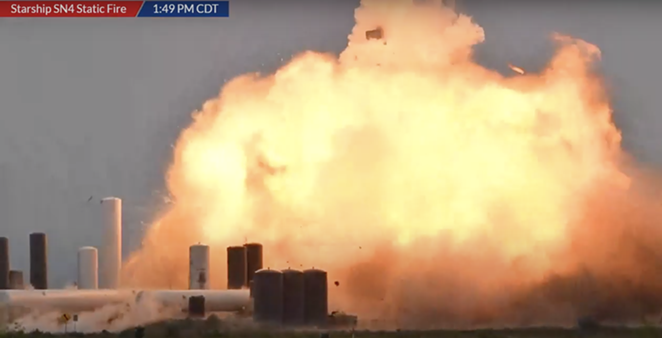 A failed test at SpaceX's South Texas coast facility resulted in a fiery explosion followed by a sonic boom on Friday afternoon.

Austin's KXAN reports that the blast was so loud that it triggered car alarms and caused vehicles to shake.

According to TechCrunch, the explosion occurred just after a static fire test of the Raptor engine of SpaceX's Starship SN4 prototype, which the company has been developing at its facility in Boca Chica, Texas. The Starship, still in development, is the planned replacement for SpaceX's current Falcon 9 and Falcon Heavy rockets.

The incident was caught on film in a livestream by the website NASASpaceFlight.

Just prior to the blast, a large cloud of gas erupted from the base of the rocket, which can be seen on the video. According to KXAN, a fire burned for 40 minutes following the explosion.


"That was not nominal," one of NASASpaceFlight's commentators said on the stream. "It's gone."

The timing of the incident is less than ideal: on Saturday SpaceX will make its first crewed launch in partnership with NASA, which was rescheduled from Wednesday due to inclement weather.