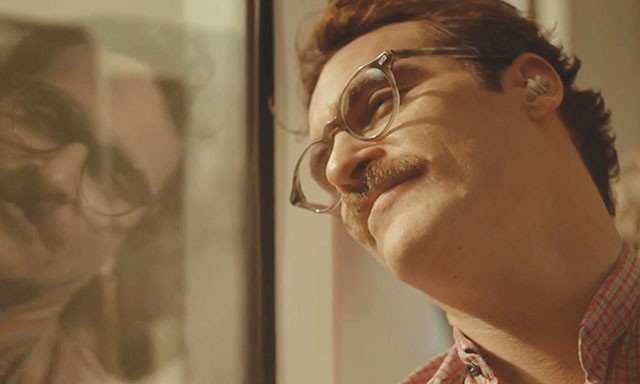 It’s a familiar story of self-discovery and romance. Joaquin Phoenix’s lonely Theodore can’t come to terms with his divorce—he keeps putting off signing the papers—and he’s just not interested in dating again. Then he meets Samantha. Their relationship is strictly platonic at first, but she’s smart, funny, considerate, attuned to his needs... He falls for her, hard, though she has no physical presence—just a sexy Scarlett Johansson voice emanating from the smart phone-slash-supercomputer he carries around, as everyone else does, in this near-future Los Angeles.

Hollywood has given us too many Manic Pixie Dream Girls, those adorably kooky and effortlessly perfect women whose only narrative job is to lead troubled, insecure men on a path to mature adult relationships before skipping off into the sunset. While Samantha may not be the first Manic Pixel Dream Girl (Al Pacino fell in love with a CGI “actress” in S1m0ne back in 2002), Her is something new nevertheless: a soothing, gentle science-fiction horror movie. It’s the rise of the machines as romantic dramedy, and the Singularity (the oft-speculated-upon future moment when computer intelligence bypasses humanity’s) as romantic tragedy. And it’s all the fault of us humans as represented by one troubled, insecure man who prefers undemanding fantasy women over the real thing.

Writer-director Spike Jonze likes to play with our cinematic expectations—see also Adaptation and Being John Malkovich, for starters—so he doesn’t drop us into full-blown future-horror, though he give us plenty of hints of the quiet awfulness of Theodore’s world, which isn’t too far from our own. Take Theodore’s job, which he loves and is very good at, crafting lovely “heartfelt” missives for a company called BeautifulHandwrittenLetters.com. Outsourcing your emotions is just one more business opportunity in the future service economy. In fact, accommodating our fellow human beings is right on the edge of old-fashioned in the Her universe.

Enter Samantha. She is a brand-new operating system for Theodore’s home computer/smart phone, literally programmed to create a personality for herself that perfectly matches her owner, so that she can best please him in every way: anticipating his every need, listening to his every complaint, matching his every interest. She never has a bad word to say about him, or to him. What could be better? Except that now he doesn’t need to learn how to deal with real, flawed, idiosyncratic women.

Though Jonze maintains an intimate focus on Theodore and his own small circle—including flesh-and-blood couple Paul and Amy (Chris Pratt and Amy Adams) and his ex, Catherine (Rooney Mara)—we slowly notice Theodore’s far from the only person enjoying such synthetic relationships and there’s a boom industry of services all aimed at facilitating these man and machine lovefests. Even Theodore can’t help but start to see how inhuman, and inhumane, this brave new world is becoming.

Science fiction of genuine ideas is rare enough on film, but science fiction with such a terrible underlying motif is rarer still. Could ordinary human failings lead to the end of interpersonally connected humanity? And would we welcome it and think it a paradise?