It might not have all the complexity of journalists tracking down a serial killer, like in the 2007 crime thriller Zodiac, or the melodrama needed to spur scribes into breaking open a story on the suspicious death of a congressman's mistress, like in the 2009 political thriller State of Play, but the relevancy of a newspaper reporter's job is made evident in the sincere, insightful, fair and extremely well-paced Spotlight.

In a news industry where Buzzfeed headlines and Kardashian selfies are constantly trending for the mainstream masses, it's refreshing (and equally discouraging) to know a majority of wordsmiths just a decade ago cared more about reporting the truth than creating click-bait content. Not only is Spotlight great cinema, it also has the power to remind audiences that a hard-hitting exposé should always be a crucial element of the ever-changing media landscape. Without professionals doing this kind of work (and not just recording grainy cell phone footage), how can anyone be held accountable?

Directed and co-written by Oscar nominee Tom McCarthy, whose track record has been so impressive (The Station Agent, The Visitor and Win Win) since breaking out in 2003 that we might one day forgive him for whatever the hell last year's Adam Sandler vehicle The Cobbler was supposed to be. Spotlight brings the filmmaker back to true form. Set in the early '00s, the drama tells the story of the Boston Globe's investigative "Spotlight Team" of reporters who uncovered a global sex abuse scandal and cover-up rooted deep inside the Catholic Church that ultimately spawned criminal accusations against 250 Roman Catholic priests. For their work, the team was honored with the Pulitzer Prize for public service.

That journalistic determination leading them to the source of the crimes is the main focus of Spotlight. While the stories of the individual victims and perpetrators is paramount in breathing life into the story, it's the Globe's writers' efforts to deliver these remarkable revelations that serve as the lungs of this compelling narrative. Oscar-nominated actors Michael Keaton (Birdman) and Mark Ruffalo (Foxcatcher) lead this impressive ensemble cast, including Rachel McAdams (Southpaw) and Liev Schreiber (Pawn Sacrifice) as the Globe's new earnest editor who wants the paper to concentrate more on local coverage. What they find at the core is a corrupt system where the crimes of Catholic priests had been swept under the rug for years.

Where McCarthy and co-writer Josh Singer (The Fifth Estate) shined most with the screenplay is in the fact they did not sensationalize the subject at hand, respected everyone involved and stayed fiercely objective (even the Vatican's official radio station called the film "honest"). In doing so, Spotlight is also able to point out the faults of its hero reporters and show that despite the immense accountability they inherit when they choose to take on an assignment like this, they are still flawed human beings that make mistakes. Nevertheless, this isn't a film about the people, per se, as much as it is about the procedure. Spotlight takes the research, analysis, interviews, red tape, dead ends and backroom politics of investigative journalism and turns it into an art form.

All the News That's Fit to Film 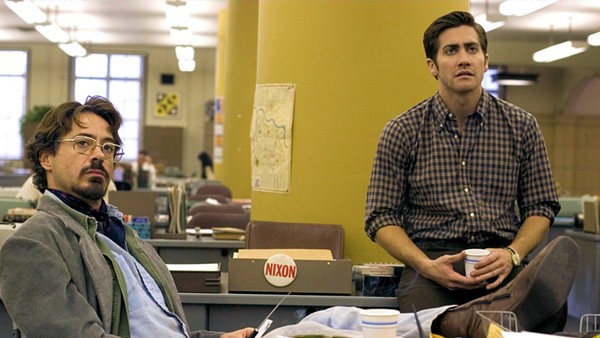 Argue amongst yourselves about whether or not Citizen Kane is the best American film of all time (consequently making it the best newspaper movie of all time, too), as listed by the American Film Institute in 1998 and 2007. My vote still goes to 1976's All the President's Men starring Robert Redford and Dustin Hoffman as Washington Post reporters Carl Bernstein and Bob Woodward and their investigation on the Watergate scandal. With that said, here are five more films set in the world of print journalism everyone should seek out.

It Happened One Night (1934) – Frank Capra directs Clark Gable in this romantic comedy about an unemployed reporter who teams up with a recently married heiress (Claudette Colbert) looking to reunite with the husband her father rejected.

His Girl Friday (1940) – In this screwball comedy, Cary Grant plays a tough editor set on sabotaging his reporter ex-wife's plans to remarry by convincing her to cover one last story before she plays happy homemaker.

Ace in the Hole (1951) – Directed by Billy Wilder, the film noir stars Kirk Douglas as a shamed reporter who finds an opportunity to scheme his way back on the front page by manipulating the events of a story he is writing.

Shattered Glass (2003) – Journalistic fraud is front and center in this true story of Stephen Glass (Hayden Christensen), a magazine writer who is exposed for inventing articles out of thin air.

Zodiac (2007) – Director David Fincher tells the true story of the Zodiac, a serial killer in San Francisco in the 60s and 70s, through the eyes of a political cartoonist (Jake Gyllenhaal), who becomes obsessed with decoding the killer's letters. – Kiko Martinez