'Spring Breakers,' as brainy as a beer bong 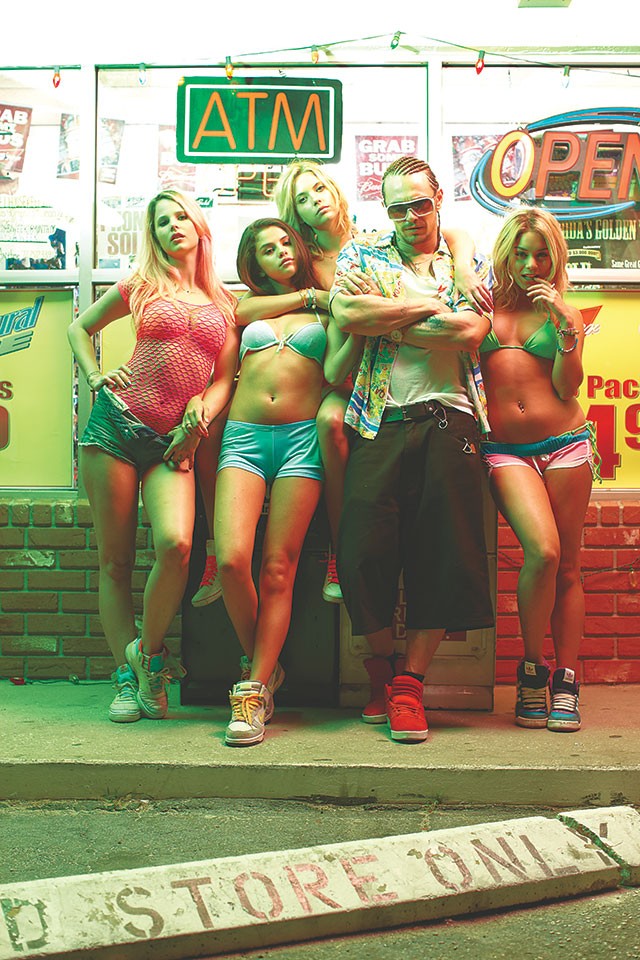 There is a long and colorful tradition of teen crime-spree films loaded with guns, wild music, booze, and always ample helpings of sex: all designed to generate maximum controversy and to shock the living crap out of establishment stiffs.

Spring Breakers, director Harmony Korine’s wildly audacious art-trash mind-fuck, falls squarely in this continuum but it also occupies its own hazy, lushly narcotic dreamland where meaning and relevance are but whispers. Vast amounts of screen time are swallowed up in a plotless collage of bouncing nubile flesh; co-eds bumping and grinding on sun-soaked Florida beaches in an endless, unconscious Harlem Shake of binge drinking, toking, fondling, sucking, and general, unabashed hedonism.

Into this hot, sticky maelstrom of hormonal fury comes a quartet of gorgeous, mostly interchangeable, underachieving college girls from a small school in Kentucky or somewhere, ready to get lost in the spring break revelry. Like the hyper-sexualized, intellectually undernourished nubile fantasy girls from your average college comedy, these gals just want to have fun, but there are obviously ominous undertones. They are obvious because Korine chunkily layers shotgun pump sounds between nearly every moment, like the loading screens of an Xbox 360 shooter.

The one-time art house wunderkind Korine (Gummo, Kids) has always had a casual relationship with narrative, but here he stretches a flimsy story into a conceptual canvas splatter. Dialogue, booming crunk tracks, and imagery repeat like on a tape loop, and without the aid of super-slow motion the movie would probably run 40 minutes.

The cast does the best they can in the absence of linear momentum, effectively capturing the listless fuzz of too many bong hits. Vanessa Hudgens and Selena Gomez brazenly attempt to shred their spotless Disney Channel teen queen images, boozing, using, and spending as much time as possible flaunting their gamine bikini bodies. Hudgens displays more abandon when it comes to skin baring, lesbian make-outs, and brandishing guns, though Korine’s wife Rachel handles the heaviest workload for nudity and general debauchery. Gomez retains a bit of her good girl image; as the freaked out Bible-thumping member of the group, she’s the first to want to bail out of this nonstop party nightmare world. The other three are more willing to cross any and all lines, and they are susceptible to the cheesy seduction offered by James Franco’s rapping, drug-dealing thug named “Alien” because, “he’s from another planet.”

With his skunky dreads, horrible prison tats, and buffoonish gold grill, he’s like a refugee from another movie, or an SNL sketch gone awry. Franco is deeply committed to the part and he’s also moronic and laughably absurd, drastically undercutting the movie’s pretentious funhouse mirror portrait of the rotted American dream for a recession-doomed generation.

Of course, that sentence is a more coherent and insightful summation than Korine himself could muster, or maybe the symbolism is hidden somewhere in all the close-ups of jiggling, beer-covered boobs.