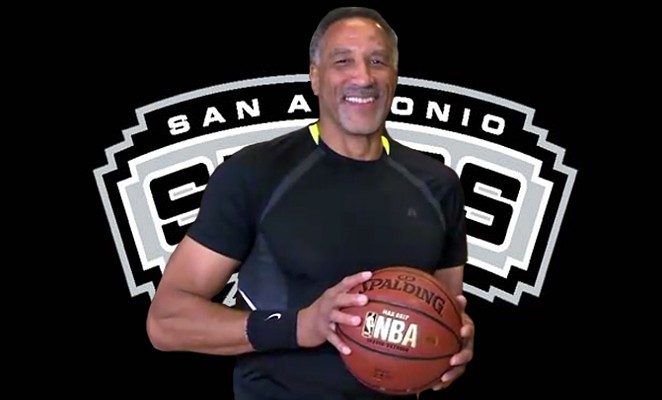 It’s nothing new to hear NBA pundits call the San Antonio Spurs old every year, but if 61-year-old Calvin Roberts has his way, there just might be some truth to that consistent criticism this upcoming season.

Roberts, who played college basketball at Cal State Fullerton, was the Spurs’ pick (83rd overall) during the fourth round of the 1980 NBA Draft. The Spurs never signed Roberts to a contract, so the 6-8 power forward went overseas where he played ball for 15 seasons with teams in Austria, Israel, Istanbul, Italy, Spain and Turkey.

Although he retired years ago, Roberts, who has five children and two grandchildren, said he now wants a second chance to play for an NBA team, specifically the team that drafted him 37 years ago, the San Antonio Spurs.

Roberts said he has written countless letters to teams around the league over the past year, including the Spurs, asking them to invite him to play in this year’s NBA Las Vegas Summer League, which kicks off this Friday, to prove he still has what it takes to play at the highest level.

Although he hasn’t received a response from anyone, including TV talk show host Ellen DeGeneres, who he also reached out to in hopes of garnering some support, Roberts hasn’t given up. Chances are slim to none, however, that he’ll be getting a call from the Spurs since they already announced their 14-man Summer League roster late last week. The oldest player on this year’s summer team: 29-year-old rookie guard Jeff Ledbetter from the University of Idaho.

The Current caught up with Roberts on the phone this past weekend from his home in Las Vegas to talk about what is driving his decision to attempt a comeback, his message to the Spurs’ coaching staff and if he really thinks he can guard Anthony Davis in the post.

Take us back to June 10, 1980, the day you were chosen in the fourth round of the NBA Draft by the San Antonio Spurs. What was going through your mind when you found out you were picked?

I was at Cal State Fullerton University and I knew the draft was happening, but I went to the gym to shoot around because I thought I might get picked in the later rounds. But then a player came into the gym and said, “Cal, you did it! You got drafted!” I said, “Really? By who?” They said, “The San Antonio Spurs.” The school called me later and confirmed that San Antonio had drafted me. It took a while for it to soak in that I was drafted. Trust me, I was happy.

How disappointed were you when the Spurs or another NBA team didn’t sign you to a contract that season?

To tell you the truth, I felt like I was so close to making it. I didn’t know what to expect going to summer camp. Right now, I’m at the gym and running and lifting weights and eating right. I’m doing everything I know I need to do to prepare for camp. I didn’t do that after I got drafted in 1980. Now, I know what I need to do and what I need to show. I’m ready to go back and try again. I’m just hoping for the best. Physically, I’m ready. If I got another chance to be on a team, especially the San Antonio Spurs, I’d be ecstatic.

Why do you want this so bad? What is driving you?

I don’t know, but whatever it is, I was born with it. I’ve lived my life and don’t want to look back and regret anything. I have an instinct in me that keeps me pushing forward. I don’t know where it comes from. But I’ll tell you, to get a shot to play with the Spurs would put me in another world.

What message would you like to give to coach Gregg Popovich and the rest of the Spurs’ coaching staff?

What I would like to say to them is that I’ve been watching them over the years. I saw how Tim Duncan prepared himself before he retired. He got in better shape. He showed me the desire can be there. He’s the one that got me going and got me started. He inspired me. If they do give me another chance, I will do my best to make a difference. I will try to play any position they put me in, even if it’s at center. I will give it my all and won’t give up. I will do what it takes to get there and stay there.

You spent most of your career in the power forward position overseas. Are you really ready to guard the likes of Anthony Davis and Blake Griffin?

You look at someone like Vince Carter who is 40 or Manu Ginobili who will be 40 when the season starts or Dirk Nowitzki who is 39 – all these players would tell you they’re at the end of their careers. Do you realize how unprecedented it is to do what you’re asking? I mean, the oldest player ever to play in the NBA was Nat Hickey in 1948, and he was 45.

Well, making history wasn’t my intention. My intention is that I missed out on something. My heart and soul is still in it. After I started working out again, it just clicked. I said to myself, “Why not?” I think I can do it. I’m in better shape now than I was in college. Once I start something, I’m never going to give up. If nobody calls me up, I’m still going to be there. I’m going to buy my ticket and sit in the seat and be there and let everyone know I’m there.

NBA Hall of Fame player Kevin McHale was also drafted in 1980 during the first round by the Boston Celtics (3rd overall). Kevin is 59 years old. Do you think you could beat him one-on-one today?