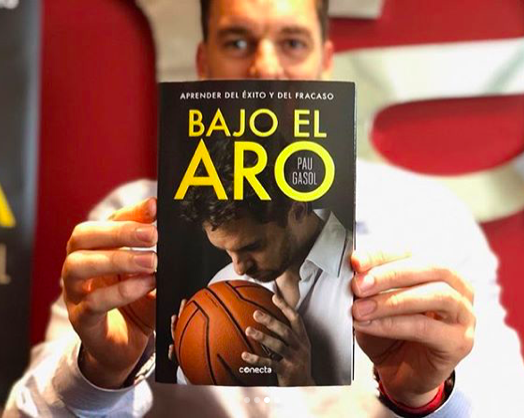 Between Ian Thomsen’s insightful account of the 2010-11 NBA season in The Soul of Basketball and the encyclopedic oral history Basketball: A Love Story by Jackie MacMullan, Rafe Bartholomew and Dan Klores, 2018 proved to be a banner year for basketball-themed books.

Then, just before the holidays, physical copies of Spurs forward Pau Gasol’s recent Spanish-language memoir Bajo El Aro (Below the Hoop) became available stateside, bringing yet another strong contender — and a sterling addition to the Spurs canon.

Originally released in Spain prior to the start of the NBA season, Bajo El Aro begins with a 2006 FIBA World Championship semi-finals showdown between Gasol and Argentinian icon Manu Ginobili in Saitama, Japan. Despite a game-high 21 points from Ginobili and a crunch-time injury to Gasol, Spain prevailed 75 to 74, advancing to ultimately capture its first world championship in basketball. To Gasol, the victory and the sacrifices that preceded it serve as a perfect prologue as he pulls back the curtain on a hall-of-fame career that also includes back-to-back NBA titles.
Comprised of five parts, spread over 22 chapters and 133 pages, Bajo El Aro is a concise meditation on talent, team building, determination and leadership from perhaps the most well-read player in professional basketball. In reflecting on his journey from Spain to San Antonio, Gasol notes that both Phil Jackson and Gregg Popovich, two of the greatest coaches in NBA history, promoted reading among their players. From Jackson, it was through gifts like Ernest Hemingway’s The Sun Also Rises, Roberto Bolaños’ 2666 and Catch-22 by Joseph Heller. From Coach Pop, it’s been through timely titles like Cornel West’s Race Matters and Between the World and Me by Ta-Nehisi Coates.

Similar to Coates, Gasol proves adept in capturing snapshots of an adolescence spent in sacrifice. For Gasol, it is moments like serenading his Spanish teammates with Green Day’s “Basket Case,” one of his favorite songs at the time, that serve as touchstones in a lifetime devoted to basketball. Gasol credits reading and literacy with providing peace and equilibrium for a hectic lifestyle, while wearing recommendations including Carol S. Dweck’s Mindset, Daniel H. Pink’s Drive, Marshall Goldsmith’s Triggers and Good to Great by Jim Collins on his sleeve.

Ultimately, it is these exemplary autobiographical elements, along with team-oriented takes on his time with the Lakers and Spurs that make Gasol’s memoir an engaging read. That it is written and flows in his native Spanish is a welcome bonus.