Spur Rudy Gay has been plenty busy this offseason. Earlier this month, Gay released his very own fashion collection.

In partnership with Zappos and Superism, Gay released a boys leisurewear collection available on the online retailer's site. For Gay, the collection hits close to home for multiple reasons.

"I've been dreaming of designing a collection for a long time," Gay said.

The collection, titled "We Can All Ball," brings together to Gay's passion for basketball and fashion, and is also highly influenced by his two sons. With an orange and black theme that pays tribute to Gay's hometown of Baltimore, it seems that every detail of the collection has meaning.

"For me, that's what it's all about," Gay said. "Basketball and my children were a huge inspiration and to show some love to the place that raised me was extremely important."

Ranging from jackets and jogger pants to t-shirts and hoodies, the pieces are clothes that kids often wear. But the color scheme and design make all the difference.

With price points between $30 and $68 (which is a snazzy coach's jacket), the collection may not be the most inexpensive, Gay said, but that shouldn't cause you to dismiss "We Can All Ball."

While Gay obviously puts a lot of himself into the but says that he kept his sons in mind when he designed the pieces. He even named a piece after each of his sons, Clint and Dean. 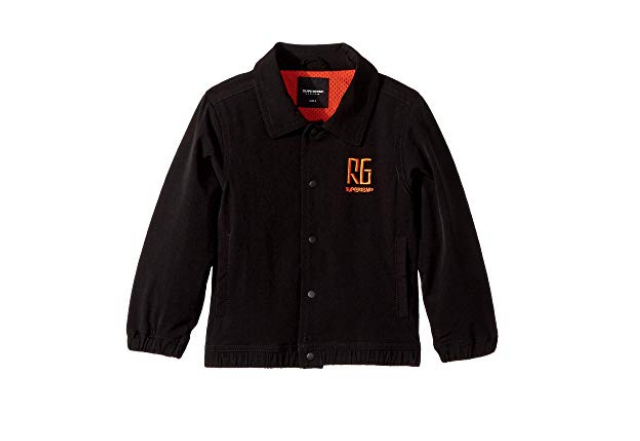 "The designs portray the attitude and personality that I love about my sons. Whether they realized it or not, they provided so much input just by being themselves," Gay said. "To have the opportunity to design a line that could end up being worn by my own children, that means everything."

He hopes that his teammates' kids will also enjoy the collection and perhaps show up at Spurs games rocking "We Can All Ball" pieces. Gay said his teammates have been supportive of his fashion venture.

"When you're in this game, having some kind of passion outside of the sport is important," he said. "We're all supportive of each other when it comes to those passions."

Fashion is definitely something Gay hopes to continue pursuing in the future. He'd like to design shoes since footwear is a big part of basketball culture, but was tight-lipped about what's next outside of basketball.

"Designing dressier clothing or activewear really interests me," Gay said. "You’ll just have to wait to find out."