Star Wars: The Last Jedi Offers a Blockbuster Examination of What Makes a Rebellion

What makes a rebellion? It might be one of the defining questions of 2017 America, and it is into this framework—like it or not—that writer/director Rian Johnson’s Star Wars: Episode VIII – The Last Jedi emerges. What is worth fighting against, and worth fighting for? Whose leadership is worth following? How do you know when to hold ’em, know when to fold ’em, etc.?

It’s a risky proposition treating a juggernaut too-big-too-fail movie franchise with gravitas, because it’s fair to assume everything is about the dollar signs. But while 2015’s The Force Awakens often felt paralyzed by its attempts to evoke memories of the original Star Wars, Johnson seems to be pushing a little harder. His spin on the “middle movie” tropes of The Empire Strikes Back is somehow both familiar and singular.

Some of the structural decisions feel pretty undeniably Empire-esque. The Last Jedi similarly splits up its principle cast of characters, sending one of them off for Jedi training—as Rey (Daisy Ridley) tries to persuade Luke Skywalker (Mark Hamill) to show her the ways of The Force—while the rest of them deal with the threat of the galaxy-gobbling fascist bad guys. In this case, that means the tattered remnants of the Republic—led by General Leia Organa (the late Carrie Fisher, whose role is a richly-deserved fond farewell)—being pursued by Kylo Ren (Adam Driver) and the First Order, trying to survive long enough to kick-start a new rebellion.

It’s a busy narrative, one that tries to keep a mess o’ balls in the air. While Rey and Luke hash out the finer points of Jedi-hood on a remote planet’s even remote-er island, Poe Dameron (Oscar Isaac) clashes with an admiral (Laura Dern) over tactical decisions, Finn (John Boyega) and a rebel fighter named Rose (Kelly Marie Tran) undertake a secret plan to help them all survive and Kylo Ren struggles with whether he has fully surrendered to the Dark Side. Johnson and editor Bob Ducsay generally find the right balance for keeping us connected to the multiple threads, even as it’s hard not to keep wanting the focus to remain on the return of Hamill’s Luke Skywalker, the emotional journey of confused orphan Rey and those so-adorable-you’re-teeth-ache cliff-dwelling porgs, which are like if you crossed a puffin with a Margaret Keane painting.

Fortunately, Johnson also delivers enough striking imagery to keep those various scenarios vibrant. The throne room of the First Order’s Supreme Leader Snoke (Andy Serkis) combines slick reflective floors with red walls; bursts of red also give a kick to the climactic battle on the planet Crait, where ski-ships kick up ruddy clouds beneath the surface layer of salt. There’s a tart sense of humor embedded in the script as well—including a wonderful undercutting of arrogant villain speeches early on—making this a franchise entry that still feels like it has a distinctive authorship. 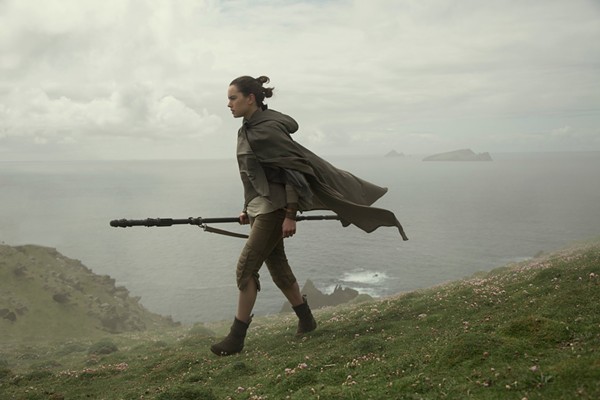 Yet the most compelling element of The Last Jedi is how philosophically dense it is, in ways that resonate beyond what might have been explicitly intended in a script written more than a year ago. Every major character faces choices that could seem either brave or foolish, depending on your point of view, and Johnson keeps interrogating the reasons those characters make their decisions. He pokes at strategic retreat vs. cowboy heroics, at who is worth trusting as an ally, at the principles that should underlie hard choices. There’s room for plenty of visceral excitement, rescues and narrow escapes over the course of 150 minutes, but there’s also time spent understanding how and why everyone got to those moments.

The Last Jedi ends on a note that might play as self-congratulatory, one that emphasizes the role of mythological narratives in offering hope to people who need it, and guidance for understanding human struggles. The Star Wars universe has become a rich mythology over the course of four decades, shaping not just blockbuster filmmaking but the way we think about underdogs battling against tyranny. This might all be a corporation’s cunning plan of churning out money-making movies, but it’s also a world that connects viewers to why we fight. That’s the kind of force that we all need with us right now.