Before a certain coffee company unleashed an overly sweet concoction, essentially helping the unicorn trend jump the shark, there was Honeysuckle Tea Time. But while the wave of Starbucks' frappuccinos will inevitably subside, Honeysuckle founder Sara Lauren Hinojosa and her team are just getting started.

The story of how Honeysuckle Tea Time came to fruition goes back long before Hinojosa, sister Olivia and their fashionable gang of bakers and cooks doled out their thousandth milkshake last month. Hinojosa recalls growing up with über elaborate tea parties set up by her father Jon Hinojosa, who is executive director of Say Sí. Their love of food and hosting shindigs also included being the it house for Thanksgiving and holiday festivities.

After graduating early from Robert E. Lee's International School of the Americas at 17, Hinojosa headed straight to a small liberal arts college in Bronxville, New York, whose alumni include names like Rahm Emmanuel, Yoko Ono, Jordan Peele, and Sigourney Weaver. Her love of food remained while there, always making sure to score a dorm with a kitchen in it, and hosting Sunday suppers for friends.

Hinojosa graduated from Sarah Lawrence College with a double major in anthropology and film and went on to work for a marketing company that handled commercials for Adidas and Puma, but found the work environment different from her time spent at Sarah Lawrence, often working as a team with other students.

"I didn't like stepping on people's toes," Hinojosa said. "It wasn't for me."

She quit the marketing company and took on a server job at The Mark, inside the Jean-Georges Vongerichten restaurant and climbed that industry's ladder. Though the milkshakes point to Hinojosa's artistic side, she's also analytical and pragmatic, and her event planning skills were noticed by the company. But one can only take New York for so long and Hinojosa eventually left the Big Apple, much to the benefit of San Antonians with a serious taste for all things sweet. 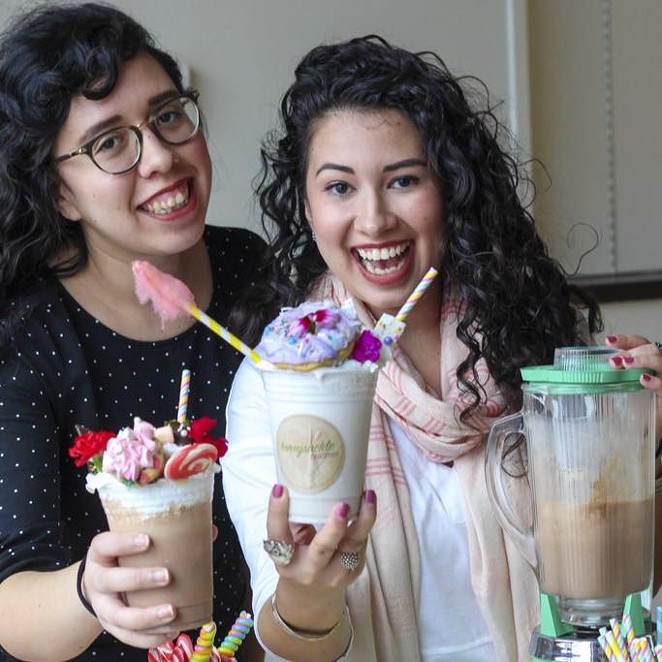 Honeysuckle, the event planning and catering business, was launched after she made her way back to SA, but the milkshakes would have to wait. Because when you're tasked with creating the menu for San Antonio's coolest rooftop bar, you have to do it.

"After the first one when it was so crazy out-of-control, we had to come up with a better system," Hinojosa said. "We had to make sure we were saving on product, because all our stuff is super perishable."

The early renditions, priced at $6, now pale in comparison to the, we'll say it, works of art the team is putting together. Flavors include chocolate chai, chocolate mint, lavender vanilla and rose, with an orange blossom dreamsicle on the way for summer. And there are no holds barred when it comes to toppings and themes. The milkshakes often include tea-infused cupcakes, donuts, cookies, lollipops, neon marshmallows, chocolate-covered pretzels, chocolate-covered strawberries, chocolate pearls, chocolate bark, brightly colored meringues, edible flowers, and all the edible glitter you can muster. Themes have included Fiesta, ice cream cone cannolis, Valentine's Day, Girl Scouts, s'mores and, yes, unicorns.

There really is no holding back.

"It's the aesthetic. We're doing something totally different from any dessert option that's currently offered," Hinojosa said. "It's so exciting when you hand it to somebody, they're so excited about it, it's something they haven't seen before, it's beautiful it's delicious."

Instead of Starbucks' mango flavors and sour "unicorn tears," Hinojosa and co. use a lavender shake base with funfetti sprinkles, lavender cupcakes, and iridescent decorations.

These days, Honeysuckle events are ticketed ($10 a pop; it's worth it, promise) to help streamline the waiting process and a team of five sugar elves whip up the creations. Olivia and  Christine Craig decorate, Carly Garza and Juan Mesa blend and Hinojosa expedites. Bigger events call for more help by way of Mauricio Romo and Joe Andy Garcia. And they're mobile — milkshakes have popped up at West Elm, San Antonio Museum of Art, Say Sí, Brick and Dignowity Kolaches, which the staff uses as a commercial kitchen to prep their baked goods.

Nabbing a ticket means signing up for their newsletter and following them on Instagram where they announce when tickets will go live on Eventbrite. Get them fast — Hinojosa has started capping the events at 200 milkshakes.

If the sight of the milkshake gives you pause — calories are calories, after all — you'll want to keep tabs on Honeysuckle's next project, Sage, where they'll tackle savory dishes inside The Brooklynite starting Friday, May 5. The meatball menu will be short — two appetizers, three meatballs, three sauces and three sides — and will run Tuesday through Saturday from 6 to 9 p.m.

Hinojosa and her staff left Paramour to focus solely on Honeysuckle this March with a permanent location as the only end goal in sight, though we may start seeing cocktail and dessert nights from the team in the coming months.

"I have about 5,000 ideas and thoughts throughout the day, but I can still get things done, manage a team, see strength to create functioning system," Hinojosa said.