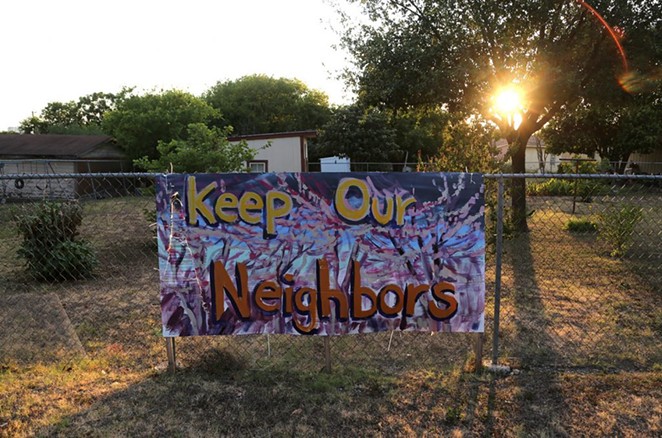 A commercial development plan to build a Starbucks in place of nine derelict homes in the East Side neighborhood of Government Hill was never seriously a consideration, according to the coffee shop giant.

Additionally, Fort Worth-based Vaquero Ventures, one of several real estate developers that partners with the coffee chain in Texas, has removed itself from a deal with property owners Sara Martinez and the Jackson Cloma Living Trust after recently learning about opposition many nearby residents have to commercial development replacing the homes on the northwest corner of North Walters Street and Interstate 35, near one of Fort Sam Houston’s gates.

“We have never had either of these properties under contract and do not wish to develop something that is in opposition of the local community,” Vaquero Ventures co-founder W.A. Landreth said.

In an email sent on Tuesday to a Government Hill couple fighting the plan, DuWayne Burge, Starbucks store development manager for Central and South Texas, said the company never seriously engaged in any discussion about the site.

“Unfortunately, I don’t know who is developing this corner, but I can tell you it is not on our behalf,” Burge told Steve Versteeg and D’Ette Cole, who live across the street from the site.

Currently, only one family remains in the homes; the rest were asked to move by Martinez in preparation for an incoming development. After interviewing some of the residents and Martinez’s lawyer, the leases between the tenants and Martinez appear to have been verbal, not written.

Currently, nine one-story homes sit on the residential properties—eight on those owned by Martinez, and one on a property owned by the Jackson Cloma Living Trust, which is managed by Frost Bank. In late July, Matthew Badders, a lawyer representing Martinez, told the Zoning Commission the houses were set to be demolished regardless of whether the commission approved a rezoning request from residential, “R-6,” to commercial, “C-2”—which the commission denied for both sets of properties in 7-3 votes. 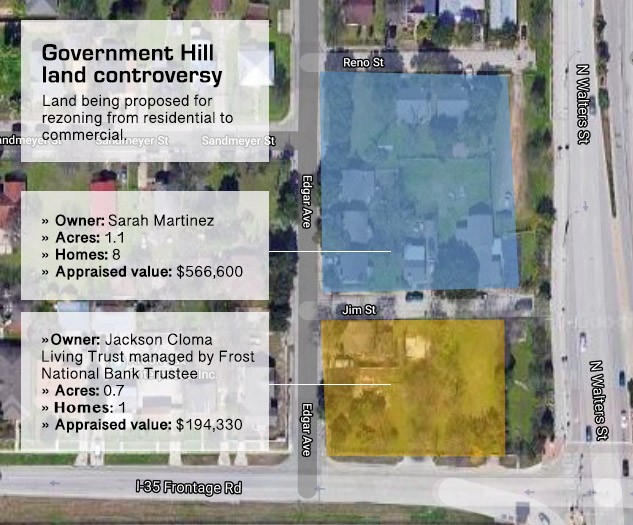 Badders disagrees with the characterization that the residents were displaced. In an email to the Heron, Badders said the leases simply were not renewed. “A few people got to stay longer and got free rent while they looked for a new place,” Badders said. He also said every tenant got their security deposit returned.

Two households the Heron was able to track down and interview say they didn’t want to leave. One offered to buy the house.

The other is Carolina Davila, a mother of three who rented one of the homes on Edgar Avenue, who said Martinez gave her an ultimatum: be out by June 28 or start paying $1,100 in rent, an increase of roughly 69%, according to Davila. Several interview requests to Martinez through Badders were declined or not granted.

Davila, who works as a teacher’s aid at the San Antonio Independent School District, said she was sad to leave the community her children grew up in. “It was a real nice neighborhood. Everybody would take care of each other,” she said.

Badders said Martinez is in her 70s and no longer wants to be a residential landlord.

At least one household, the De Leons who lived at 111 Jim St. for seven years, had positive things to say about Martinez as a landlord.

In an undated letter addressed “To Whom It May Concern,” which Badders provided to the Heron, the De Leon family said, “The community seems to believe that we are being kicked out. But not one of them have came to ask if we need assistance. This is her property and she should do as she wishes. She is the best landlord we’ve ever had.”

At the Zoning Commission meeting July 21, Badders unveiled Starbucks as a potential tenant to commissioners in the middle of the meeting, catching them off guard as they were presented with new information with which to base their decision. Before the meeting started, the rezoning requests for the two sets of properties were placed on the Zoning Commission agenda without a named tenant, which concerned some commissioners who felt Martinez and the trust, with commercial zoning in place, could lease or sell the properties for a commercial use without input from nearby residents. Even after Badders revealed Starbucks as a potential tenant, he couldn’t guarantee to the commission that the company would fully commit to leasing the property—the uncertainty only reinforced commissioners’ concerns that they’d be giving Martinez and the trust carte-blanche on the properties without neighborhood feedback.

Badders told commissioners moments before they voted that he would fast-track the request to the next available City Council meeting on Aug. 20, with or without the commission’s blessing. In San Antonio, the City Council makes the final decision on zoning cases. During the meeting, Commissioner Lillian Jones said District 2 Councilwoman Jada Andrews-Sullivan supported the zoning change. Jones and other supporters of the plan, including Government Hill Alliance, one of three neighborhood groups in Government Hill but the only one recognized by the city, cited a neighborhood plan for Walters Street from a few years back that showed commercial development lining the corridor to Fort Sam.

The city’s Development Services Department recommended the zoning change, as well. Ximena Copa-Wiggins, spokeswoman for the department said, “The proposed request to a ‘C-2’ would be consistent with [the] area as well as with commercial uses along I-35 and North Walters.”

The Jackson Cloma Living Trust and Martinez submitted their applications separately, but were intending to lease the combined 2 acres to a developer for a joint project.

Before the case advances to the City Council, it’s due to be heard by the Planning Commission on Aug. 12; the commission denied a neighborhood plan amendment for Martinez’s properties the week before the Zoning Commission meeting.

Earlier this year on Jan. 21, the Zoning Commission rejected a rezoning request by QuikTrip, a convenience store chain that tried to get the zoning changed on behalf of Martinez and the trust in order to convert the properties into a mega gas station.

The encroachment of commercial development into this part of Government Hill has been controversial for many residents in the area, as they express dismay over the destruction of low-income housing. Others continue to advocate for additional urban development.

This latest development in the land controversy at Walters and I-35 is a small victory for residents who opposed replacing residential properties with commercial development.

Dora Perez, 53, who lives within 200 feet of the site, said, “We would love to have the properties remain residential. If it could stay residential we would be more than thrilled.”

Perez inherited the house she lives in on Sandmeyer Street from her parents, as is true for multiple family members of hers who live in the neighborhood. For her, this fight is about preserving the multi-generational community she grew up in.

She added, “All we wanted was some type of compromise.”

Michelle Del Rey is a freelance journalist in San Antonio, and Heron contributor. She graduated from the University of Westminster in London, England, with a bachelor of arts degree in journalism. She can be reached at michelle@saheron.com, @meeshdelrey on Twitter.