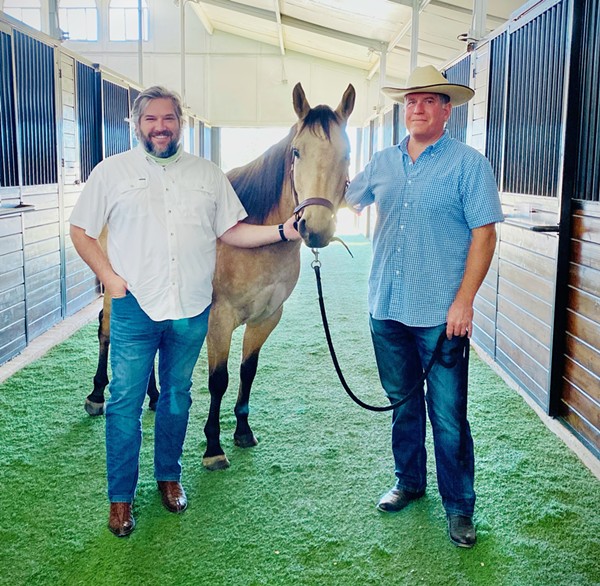 When it comes to the booze business, Chris Ware and West Stone are seasoned pros.

Together, the two San Antonians have nearly three decades of liquor-industry experience, from national sales to slinging drinks behind the bar. When the COVID-19 pandemic hit, the duo took their next big professional step and launched their own brand: Ranch Brand Wine & Spirits.

They launched the business in June after Stone was laid off from his job as national sales manager for San Antonio-based distiller Seersucker Gin.

“We had been thinking and talking about Ranch for a while, about creating this line of products, and I sort of got pushed off the cliff. It was time,” Stone said. “I called [Ware] and said, ‘Hey, I think I want to do this. Do you want to do this with me?’”

On June 1, Ware — who managed accounts in six Southwestern states for the same local distillery — quit to join Stone in creating Ranch Brand.

The pair set out to create affordable high-quality spirits and interviewed several local distilleries in search of one that shared similar ideals. They quickly landed on a partnership with Alamo Distilling for Ranch Brand’s inaugural product, a vodka that was well-received by consumers and craft cocktail establishments alike.

The positive buzz paved the way for the subsequent products in the Ranch family: gin and three Texas bourbons.

Stone and Ware debuted the bourbons late last month, introducing overproof whiskeys to the brand’s growing portfolio. Each Ranch Texas bourbon is aged for at least two years in charred barrels before being bottled in San Antonio.
The team also produces gin, rum and vodka under a smaller, more casual brand: Derel. The Derel line was developed to give bartenders a local option for well booze that offers quality at a competitive price. The brand gained popularity via social media, with liberal use of the hashtag #dpics, funny memes and organic engagement from bars across Texas that use the products.

Like any startup, Ware and Stone have also faced their share of hurdles. While the pandemic has disrupted virtually every industry, the food and beverage community business has taken one of the hardest hits. During a time when potential customers were closing their doors and losing revenue, big distributors were wary of taking on new craft spirits.

“Most distributors didn’t want anything to do with us. The general feeling was, ‘There’s a pandemic going on. We don’t know what that’s going to do to the market,’” Ware said.

So far, sales figures back up that assessment.

According to numbers from Nielsen, alcohol sales in stores were up 54% in late March compared to that time last year, and online sales were up nearly 500% in late April. From what the Ranch Brand team has seen, alcohol appears to be the self-medication of choice during the pandemic — at least in Texas.

“Now that bars and restaurants are opening back up, we’ve seen a hockey stick spike in sales,” Ware said. “When the pandemic started, [Stone] and I would just pop into places to see who would talk to us. We’re not doing things the old-school way, where we throw an event and give away free shit with our logo on it. We talk to the establishment about what we can offer that we think may work for them.”

At the onset of statewide shutdowns, the San Antonio, Austin and Houston bar scenes proved to be impenetrable sales territory for Ranch Brand. However, the less-competitive Fredericksburg market turned out to be prime picking. At press time, nearly every 51% establishment in the tourist town has at least one of the company’s spirits on its menu.

West Texas has also yielded opportunity for the duo, who trekked out to visit liquor retailers in the area, bottles in hand. The seemingly obvious move paid off because other suppliers rarely make the time to build face-to-face connections, Ware said.

“You look at some of the largest [liquor] companies in America, and they started either after prohibition or after WWII — they were so used to getting their ass kicked,” he added. “And they learned how to make it by because they started looking at things differently.”

For Ware, the brand’s continued success will come down to hard work and building on his and Stone’s deep industry experience.

“It goes back to our motto, which is that there’s two reasons you’re not successful: you’re either too scared to be, or you’re too lazy to be,” Stone added. “There’s 3,000 small distillers in America that are putting really great product out there. It’s just that many of them don’t know how to sell it. We do. Our experience, that hustle, has absolutely gotten us here.”