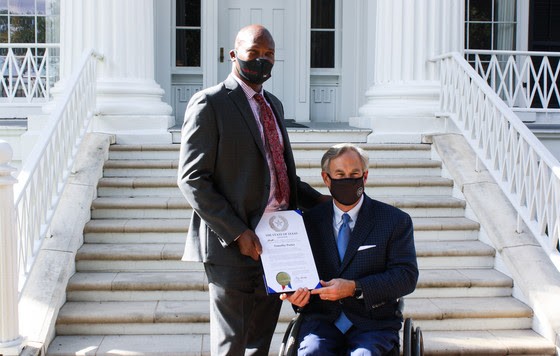 Porter retired as an Army sergeant in the late '90s after losing most of his fingers when a C-4 explosive device detonated in his hands. While working in the IT department of the San Antonio Express-News, he taught himself how to develop mobile apps, and by 2001 launched his own software firm.

Drawing on startup assistance from the SBA, Porter's Appdiction has since expanded into a variety of other technology work. From 2017 to 2018, the company experienced a 254 percent increase in revenue.

"Tim embodies the entrepreneurial spirit, and his journey from a small startup to the CEO of a thriving business is truly inspiring," Gov. Greg Abbott said Wednesday as he recognized Porter's achievement.

"I could see how quickly handheld devices were growing. It was obviously the fastest growing segment of the development market," Porter said in an interview with tech blog Silicon Hills News.

Appdiction received start-up assistance from the San Antonio Procurement Technical Assistance Center, which coaches businesses on contracting with the federal government. It also received support from the SBA's Small Business Development Center at University of Texas at San Antonio.

Over time, the company has expanded into offering innovative IT training for universities and businesses. It's also become a go-to Department of Defense contractor.

"It's because of small business leaders like Tim that the state of Texas continues to foster an environment that encourages entrepreneurs to innovate and grow their business," Abbott said.