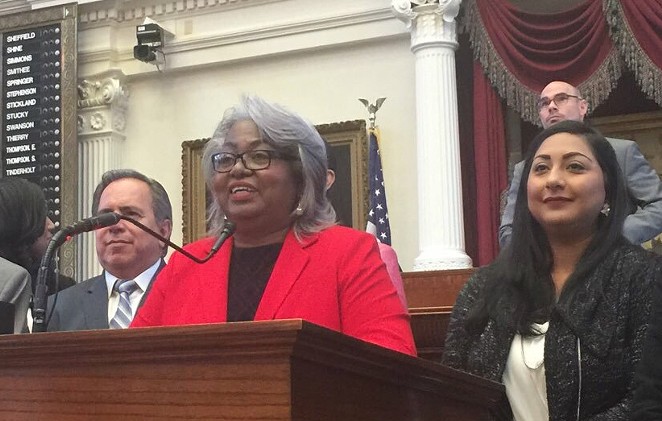 State Rep. Barbara Gervin-Hawkins urged warring factions in the Bexar County Democratic Party to head to the bargaining table and build unity ahead of the 2020 election.

"Everyone's passionate — I get that — but we've got to set our differences aside and do what's best for the party," said Gervin-Hawkins, a Democrat who represents San Antonio's District 120.

The plea comes amid a power struggle in the BCDP that led current Chairwoman Monica Alcantara to call a meeting Monday where members voted to strip six party officials of their positions, including the group's treasurer and secretary.

Two weeks prior, Alcantara held a news conference announcing she'd forwarded evidence to the FBI that may implicate party members still loyal to prior chairman Manuel Medina of financial crimes. Medina has denied her claims.

Gervin-Hawkins said she hasn't had time to play peacemaker since she's busy with the current legislative session, which concludes May 27. However, she said she expects to talk to other members of Bexar's statehouse delegation to build support for talks.

"I think the conversation needs to start now," she said.

BCDP, she added, needs to pull together to make sure Democrats can make gains in 2020, when many observers expect anger at the Trump administration will drive strong progressive turnout.

David Crockett, a political science professor at Trinity University, said local party infighting can make it harder to mobilize voters. In addition to running primaries, local party organizations are essential to block walking and other grass-roots efforts that drive turnout.

"If you're looking to get people out for low-profile races, it's important to have a healthy county party," he said. "In those elections, 100 votes really matter."