Stay Woke: SA Rapper Bugsy On His Latest, the East Side and Social Media 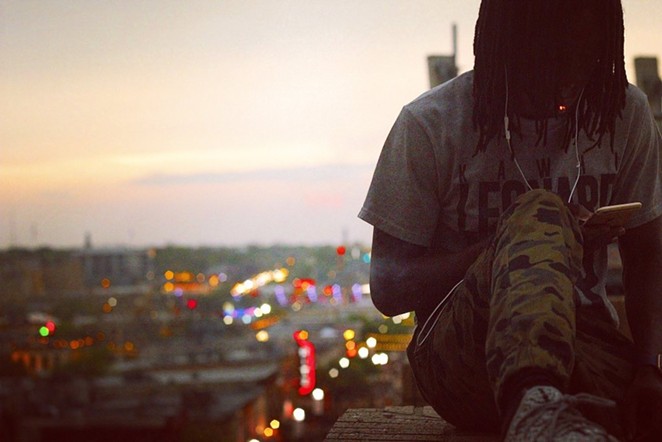 There's no place like home and SaTown's own Bugsy represents where he's from. The SA rapper lives and breathes everything 210 and he recently sat down to talk about his latest release Stovetop Stories, the Eastside and how requiem music can be appealing, and real as shit.

If you haven't heard of Bugsy, wake up. If you're aware, salute the "Hometown" star.

So "Hometown," what does it mean to you? Matter of fact, how did it start?
I mean, to be honest with you, man, the record means, it means growth. It means organic growth, it’s crazy we just said the word organic, we in Chipotle. That’s what it really means. A lot of folks maybe don’t know I’ve been doing my thing heavy in the Internet world for a long time, and just by the graces of God, a lot of the things we were doing earlier in those days it’s starting to catch up, just like "Hometown." "Hometown" was produced by one of the biggest international DJ’s right now, Carnage. A lot of folks may know him by his new record "I Like Tuh" and work with Wayne.

That’s what’s up. So why rap?
Man, honestly, just growing up in San Antonio and being from the Eastside, man, just not having a lot of outlets to hear a lot of good music as a kid. It was music that was around us regionally. I just didn’t gravitate to it, that doesn’t mean I didn’t like it. I just didn’t gravitate towards it and the music I was a
fan of, it was so hard to hear it, it was so hard to get, but you knew just as a fan and a consumer of good music.

And that process, was it fluid? Were you whack at first?
I can be completely honest with you man? From day one, I used to try to be a part of a group. You know what I mean? And this was when Nelly and the St. Lunatics were lit out here. I’m the youngest one in the group and everyone’s older than me. Everybody was like really perfecting their craft. And me, I was always the one they thought was better than everyone else. And I guess they felt ... I’ll never forget one day they came and said 'We had a sit down without you,' and they had this big meeting saying you should be the one to go solo. It was like, yo …

The writing process, the production process, how does it work? Do you hear the beat first? Or is it like, "I know you got the craftsmanship, I know you need this, this is what I’m feeling?"
I’ve been blessed enough to get really solid production from people that’s been really fucking dope. So, like, for me, it’s always been like, even before that, I try my best and envision what I’m saying before and, of course, in the early days as a rapper, you write in your journal and shit like that. To this day
I don’t write, unless I’m actually in the studio. I used to keep journals and journals, and after a while it was like half of this material I’m not even recording. As I got older, I started getting better production and it was really dope to hear the scene already coming together and set for you. You get these real cinematic beats and it’s like 'Damn, all I really gotta do is stay in the pocket.' Now it’s like 'Don’t fuck it up.' I’m just being honest, man.

On Stovetop, I noticed a lot of Jay-Z references.
Just to be real with you, I try my best to put a lot of hip-hop in there. I wanted dudes to really know. Like, I remember it was a certain time right after B.I.G. had died and cats was holding [Jay] to the fire, saying he always mentioning or quoting B.I.G. And I ain’t gone front, one of my best friends is like a Nas fanatic, so me and him used to go back and forth. I love Nas, I just lean more to Jay. I mean, Nas is still Nas to me.

What’s your take on what’s happening on the Eastside, being that you’re from that area?
Man … times are changing. I think people think social media just affects sports and what you take pictures of. Naw, social media is affecting the world. This is what connects the world. That’s what makes the world so small. If social media can make the world small, imagine what that does for a side of town. And the way the streets are, it’s crazy, the streets are really touching the internet. I got dudes of mine that are OGs, literally, that have done some things and showed me things that I’m not proud of, that I see now … all they do now is walk around with a phone in they fucking face.

The complete opposite of who they once were?
Yeahhh … know’m sayin'? These are them people that their whole aura was like no talk, being very silent people in their movements. Now they’re OGs with cell phones, it just goes to show. I look at it from that perspective. And the young ones, these dudes don’t know no better, they’re doing and saying things. They don’t know people will hold that against them. That’s really the heart of it. It’s not the dope or the gangs, at the end of the day, it's about values. The game is to get money. If you a gangsta, the objective is to get money, that’s what real gangstas do. So my point is, it’s just a few knuckleheads that don’t realize it’s real. It’s unfortunate that San Antonio has to experience that, but there’s other cities in America far worse than we are. It breaks my heart to wake and see maybe someone I know or families affected. I’m trying to influence to the big dogs out here to stop following trends. I’m not naming no names, but if you feel like you a big dog out here, then show me you a big dog by making your brand of music and your style of music.

In response to that, have you had that conversation?
I really feel like STS is doing that. It’s a conversation, the project itself is having that conversation. Like the cover, the cover itself represents, like, everything I grew up on … everything bad about that cover, and it’s like any artists, and I hate to keep saying this, but big artists are making their base proud to be a part and implementing things and making their hometowns proud.

Does the success of STS determine the next move or are you locked in?
We locked in. STS, and it may sound cliché, that shit is really just the beginning. There were records that management felt we should’ve put on there, for the sake of radio.

Because you didn’t do that ...
Man, I felt like, man, I fought with everybody from my engineer, like, 'Bruh, I am going to plant my flag with this at some point' ... You ever notice how some cats will be on their second or third albums and they’re trying to actually show you who they are? and it’s like 'Fam … they should’ve known that.' So my thought, by the third or fourth song, I wanted folks to know who the fuck Bugsy was. If you had no idea, before you got to … look we come from an era where number three [on the record] is supposed to be the big time single. That's just supposed to be that joint that’s outta here … I told myself I’m not gonna approach it like that. I want these folks to know who I am by that third song. My label wants a hit, I want you to know … This nigga just said his mama was dope fiend, his daddy was a fucking hustla - know who homeboy is. I [the listener] don’t have to ask any questions. Like, the questions that might be asked are more in-depth about the shit he [Bugsy] already said. The goal was for it to be, like, he said a whole lot by track three, and they know me.

Below is the new video for Bugsy's "Young Boy Die," which is featured in the film Line of Duty.