Stella Public House takes pizza and beer to the next level 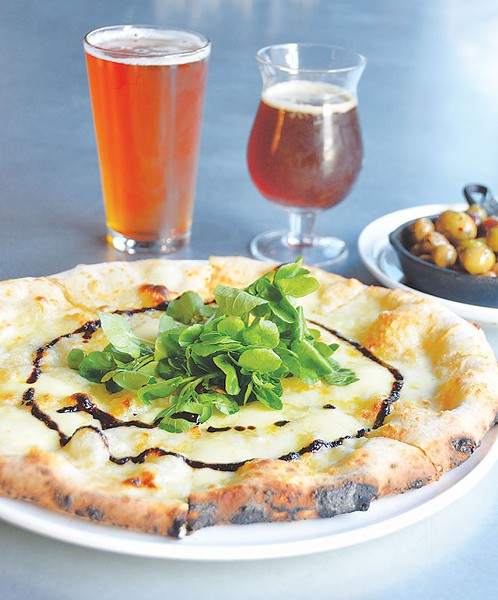 The terms “wood-fired” and“brick oven pizza” have longbeen bandied about as guarantors of quality, though sadly they seldom ring true. What may arrive out of elite ovens, even those of high pedigree, is all too often an over-crisp cracker of a crust, or its opposite number, fat and doughy. Not so, the extraordinary crusts at Stella Public House, which display their Italian heritage, refined by an Arizona education.

Pizza fanatics may have already guessed that I’m referring to Pizzeria Bianco in Phoenix, Ariz., named one of the best pizzerias in the U.S. by Bon Appétit, Gourmet, and The New York Times, among other authorities. One bite into Stella Public House’s crusts, and this ex-Phoenician instantly recalled James Beard award-winning chef Chris Bianco’s famous pies. During our second visit last week to the new arrival at the Blue Star Arts Complex, Stella co-owners Lacey Aleman (general manager) and Roland Aguirre (chef) confirmed they received tutelage from Bianco himself.

Chef Aguirre, who trained at Le Cordon Bleu in Austin, has added a few of his own twists, using a proprietary mix of three Texan woods (pecan, plus two secrets) to cook the pizzas in the oven imported from Italy. The result of all this care is a thin-ish crust — both crunchy and chewy.

Produce is sourced locally, even the olive oil is Texan. On our first visit, not able to decide between the wild mushroom and spicy Italian sausage pizzas, we opted for an off-the menu combo, which added $3 to the base-price of $14. The mushrooms were a mix of Cremini, oyster, and Shitake, and the fragrant sausage, house-made. Also included were a smoked fontina, and the house-made mozzarella. Laid out on the superb crust, the ingredients kept their distinct textures, rather than melding into the warm, familiar mélange of a lesser pie. The crust arrived puckered, and the slices refused to fall limp, even with our double order of toppings. We also tried the Quattro, a white pizza topped with a mix of Gorgonzola, Parmesan, ricotta, and the house-made mozzarella, to which is added a fig-balsam drizzle and a mound of watercress. The rich cheese blend may lead one to expect the flavors to be overbearing, but no. As is the house style, the toppings are far from heavy, which may disappoint some diners. I, on the other hand, was quite pleased as it allowed the crust to shine; my companion, ambivalent at first, came around — though mentioned that without distributing the greens about, the seemingly complex pie was almost as simple as a traditional Margherita.

We didn’t forget we were on a beer-and-pizza run; before the pies arrived, we started out with a strong Belgian-style dark ale from California, the Stone 12.12.12 Vertical Epic Ale ($8.25), and a side of warm olives ($6) from Italy. OK, at 9 percent ABV and Stone’s well-balanced but aggressive flavor, this is a questionable way to begin a tasting. Gone when the pizza arrived, we moved on to Buried Hatchet Stout, from Southern Star Brewing in Conroe, Tex. Served in a tulip glass, and priced at a more reasonable $5, the creamy brew has a smooth mouth-feel, and was just bitter enough to allow the delicacies of the pies to come through. The beer selection includes 20 taps and two-dozen bottled beers; there are also red and white wines by the bottle and glass, and a modest selection of spirits, too. But this is, almost defiantly, a beer bar. Bar manager April Poerner, with past experience at Wurzbach Icehouse and The Friendly Spot, choses her brews wisely, opting to bring in craft beers not typically offered by other local bars — a difficult task in Southtown. Training for certification as a cicerone (sommelier of the beer world), Poerner also concocts a changing selection of beer cocktails.

Not just a pizza joint, albeit an accomplished one, Stella Public House also serves enoteca-style small seasonal plates. Currently on the menu are lamb meatballs, roasted cauliflower and fennel (soon leaving, as the approaching hot days end our spring crop), and a sturdy, farm-style bread — cousin to the fabulous crust.