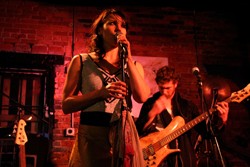 
Stephanie’s Id are products of the New South: an Asheville, North Carolina band without a hint of American rootsiness. They specialize in post-modern pop, in the sense that they freely take from anything that appeals to them, whether it’s electronica, jazz, soul, or the more baroque side of popular music. Their method recalls Portishead, whose “Glory Box” they covered in 2006.

Stephanie Morgan, the group’s lead singer and namesake, possesses a major vocal presence and an ability to inhabit everything from the oddball turns of “Wash Us Down With Sea Saline” to the R&B brassiness of “Hey Hey Hey (It’s Gonna Be OK),” two standouts from their third album, 2007’s Grus Americanus.