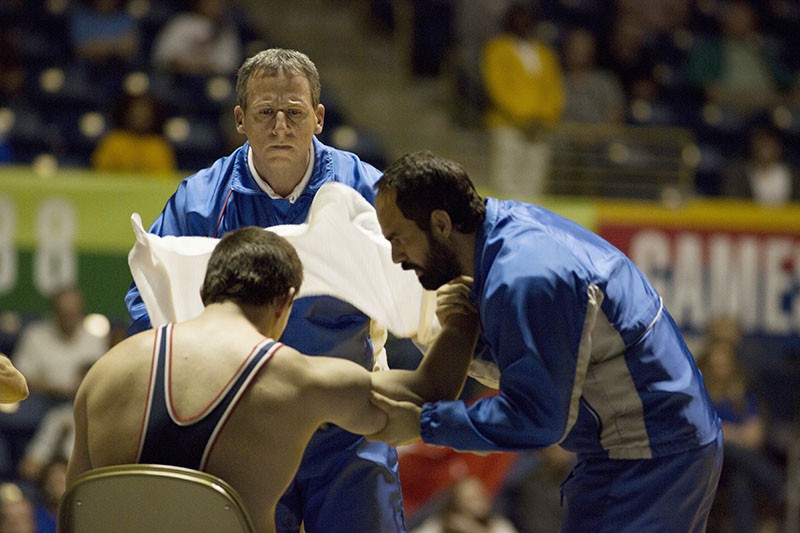 Let's get this in ink: Foxcatcher is not a sports movie. Yes, it follows the careers of brothers and Olympic wrestlers Mark and David Schultz (Channing Tatum and the quietly brilliant Mark Ruffalo) as they interact with billionaire creep John Eleuthère Du Pont (Steve Carell). And yes, Channing Tatum dons a strongman leotard for about half the movie. But for director Bennett Miller, wrestling is a lens through which to look at inequalities between men: wealth and paucity, age and youth, shooter and victim.

Foxcatcher opens with Mark Schultz doing middle-school speeches for money, living the glamourless, ramen-fueled life of an athlete in a non-major sport. Training in the violent ballet of wrestling with his brother David, Mark gets a call from a lackey of Du Pont, asking him to visit Du Pont's Foxcatcher mansion in Pennsylvania.

No spoiler alerts are necessary, for the flick stays close to the real relationship between the wrestler brothers and the billionaire. In 1996, after years of funding the brothers and U.S. wrestling, John Du Pont, heir to the Du Pont chemical fortune, shot and killed David Schultz without clear motive.

When we first see Steve Carell as Du Pont, it's a startling image. Carell, known best as the lively and anti-PC Michael Scott from The Office, is unrecognizable as the bleak and gray-skinned Du Pont. His posture is Quasimodian, his skin like a composite of dandruff flakes and cheap couch pleather. His nose—a prosthetic to match the prominent schnoz of the original—gives his voice a head-cold timbre, adding to the sickly effect. Of all the stunning performances in Foxcatcher, the best might be from the makeup crew led by Bill Corso.

"Are you getting the support that you need," asks Du Pont, offering his absurd resources at the Foxcatcher estate to the aid of Mark. After gaining his trust and admiration, Du Pont turns Mark against his older brother. The plan eventually backfires, as Du Pont alienates Mark with the back-and-forth emotional game. We see Mark change from a devotee of Du Pont to a distressed and self-destructing subject as Du Pont reels him in and out and mismanages his training. Like Carell, Tatum's role in Foxcatcher could change his career momentum. Known for being sort of a meathead, Tatum doubles down for the part of the intense and inarticulate Olympian, committing in whole to the thick-necked role.

While Mark implodes, Du Pont goes through a creepy transition of his own. From financier to coach to desperate over-50 wrestler, the billionaire devotes himself to his newest fantasy project. You can even trace the arc by his clothing—from sportcoat and sneakers to Foxcatcher tracksuit to too-short shorts and leotard. At any misstep or possible event of humiliation, he hides behind his money, bribing competitors or sending in his cronies to do the talking.

Through his money and his name, Du Pont builds a persona that is real only to him, with all other characters seeing through his thorough incompetence. But in order to get their slice of the eight-figure pie, no one throws him a reality check. At the party after Mark's World Championship win, Du Pont's impromptu wrestling display is gut-wrenchingly embarrassing, writhing on the floor with a world-class wrestler until the kid takes an obvious fall. Carell is exceptional, lighting up his reptilian eyes when the store-bought dream comes to life.

Toward the end of Foxcatcher, as Du Pont's shaky psyche goes off the rails, we see him slumped in front of the TV watching a self-serving documentary for what must be the 1,000th time. Mark reads a script calling Du Pont a father, David grimaces as he calls Du Pont his mentor and Du Pont voiceovers the thing with empty images of wrestling and Cold War patriotism. This masturbatory doc seems like the pinnacle of Du Pont's wrestling fantasy—proof of his self-worth, even if he financed and spun it in his favor. Unfortunately for the Schultz family, that fantasy is so real and padded so heavily with money that Du Pont thinks he can toy with and take people's lives.