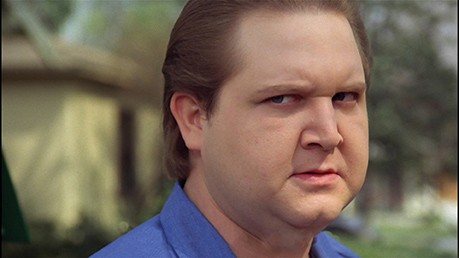 Ivan Drago from Rocky IV might've been the toughest movie nemesis to hit the big screen in 1985, but pound-for-pound no one can reach archenemy status quite like Francis Buxton (Mark Holton), the chubby, spoiled man-child who covets Pee-wee's bicycle in Pee-wee's Big Adventure. The San Antonio Current caught up with Holton via email for the 30th anniversary of the film.

What do you remember most about making Pee-Wee's Big Adventure back in 1985?

Right now I'm remembering a ride to location with [Tim] Burton and [Paul] Reubens in a van and hearing about their ideas for Part II. Ha!

Have you ever been to San Antonio? The Alamo?

Somehow, in all my years of visiting Texas, I have missed visiting San Antonio. That has to change. From my earliest memories the Alamo has been near the top of my must see list.

Was it evident to you early on that director Tim Burton would do great things in this industry as a filmmaker?

Yes, I thought so. It didn't take long to see that I was part of something very different. The fact that he had Victor Kemper (Dog Day Afternoon) as cinematographer was huge. The talent of the crew Burton had, and the way they worked together, was impressive. He knows how to talk with actors. He listens and steers. It's a talent I haven't seen very often.

Your character Francis wants Pee-Wee's bike so badly, but then chickens out after he steals it, so we never get to see Francis ride the bike. Did you get to ride the actual bike on set? What were your bike riding abilities like back in 1985?

I was on that damn bike three times! Two of those times I thought I was going to die. Tim had me in a bear suit that was made from a real bear and incredibly heavy. The bear removes his head revealing the face of Francis. I was on an elevated platform with a track the bike followed. To my left was a straight drop to a concrete floor. The handle bars weren't tightened enough to allow for the added weight of the suit. Halfway across, the bars plunged downward and the weight was taking me over the edge. Two brave crew members grabbed me. If they hadn't it would have been ugly. The second time I was rigged with wires to a telescoping crane. It was a night shoot at a drive-in movie theater. In a matter of seconds I was yanked from ground level to just above the height of the screen. The crane would rocket me up and stop, but I would continue to fly upward until I fell back down a few feet with a tremendous jolt. Sheer terror! I would then be lowered screaming obscenities much to delight of [co-writer and actor] Phil Hartman who would dissolve into laughter.

Are you partial to any of the quotes from the film?

There are fans that remember my lines better than I do. The line I hear most often is, "I know you are, but what am I?" Sometimes I hear the entire scene.

How much underwater wrestling did you actually have to do with Pee-wee during your bathtub scene? Also, why does Francis bathe in swim shorts?

The underwater shots didn't take that long. We just rolled as I screamed under water. What you don't see on film are the miles of electrical cables and boxes outside the pool. When my butler, Professor Tanaka, dove in, great waves of water crashed down on the cables. When you are standing barefoot in water with electrical cables around your feet, it's a little frightening. Why does Francis wear swim shorts? Well, the Buxtons are a very modest family.

Did you get to keep anything from the set? You're customized baby blue jumpsuit with the letters FB, perhaps?

I have one of Paul Rueben's cheese sandwiches in my freezer. It's probably time to list it on eBay.

You have a scene at the end of the film with the late Phil Hartman. What was that experience like working with him?

Phil was on the set most of the time, and my time with him was filled with laughter. We fed off each other and I knew how extremely gifted and talented he was on many levels before the rest of the world did. He had an endless list of great ideas and characters. I miss him.

What do you think Francis Buxton would be doing today?

A life sentence for a series of white collar crimes.

The hook shot your toss up in 1985's Teen Wolf goes into the basket with some nice editing. Did you ever try to actually make that basket or were you just flipping it up there for the camera?

Believe it or not I nailed it on the first take. The surprised reaction you see on my face was real. Pure luck!