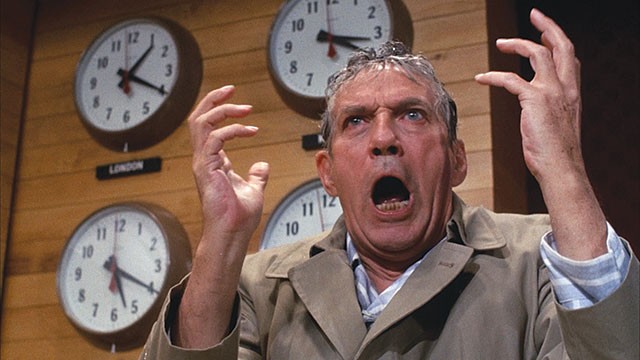 When I learned of the great film director Sidney Lumet’s death in 2011, I decided to memorialize him by diving back into his masterpieces. While Dog Day Afternoon, Serpico and, of course, 12 Angry Men are undeniable classics, the one that continues to impress and astound me is Network.

The 1976 film manages to be completely of its time, but also to have an eerily prescient quality. Paddy Chayefsky’s deeply satirical script reverses the old adage (attributed to Karl Marx, commenting on Hegel, natch) that “history repeats itself first as tragedy, second as farce;” for Network’s immediate impact and humor derived from the fact that, surely, no one would ever be misanthropic enough to air the kinds of programs the film’s fictional network UBS cheerleads. Yet now, one watches this 38-year-old film and sees predictions of: reality television, blathering talking heads, corporations’ increasing impact on democracy and the “dehumanization” of society via a callous media. That these things once considered so cynical as to be hysterical have largely come to pass is the tragedy.

But, yet, Network is still clever and poignant, a tribute to Lumet’s tight direction and full-throttle performances by some of the leads. In essence, one Howard Beale (a plumy Peter Finch), formerly a respected television news anchor for UBS, quickly descends into alcoholism and madness after a string of bad luck, while his best friend and news division president Max Schumacher (a craggy William Holden) watches helplessly. At the same time, the corporate conglomerate that owns UBS gives what seems to be free-reign to two ambitious, amoral executives to drive up ratings. After Beale, having just been fired, promises to kill himself on air and launches into a tirade calling out the “bullshit” of life (and incites the now famous “I’m as mad as hell and I’m not going to take it anymore!” chant), one of those execs, Diana Christensen (a virile Faye Dunaway) convinces the other, Frank Hackett (a pitch-perfect Robert Duvall), to develop the former news hour around Beale’s ranting.

Christensen, whose schemes only grow more ludicrous, turns The Howard Beale Hour into the highest-rated show on TV, complete with a soothsayer and other “truth” speakers, at the expense of any real news, presaging the still accelerating trend to feature opinion and commentary over investigative reporting. At the same time, she senses the insincerity of so-called radical groups, and builds a sort of documentary show around an organization called the Ecumenical Liberation Army as they hold up banks and commit terrorist acts. Schumacher, increasingly disgusted, gets sacked. Then he gets in the sack with Christensen, a plot twist I can only assume was created just to get to Beatrice Straight’s stunning, Oscar-winning performance as Schumacher’s scorned wife.

Though he’s a huge star, Beale is clearly cuckoo, and he goes too far for Hackett when he unveils, on-air, a plot for UBS’ parent company to be bought by “the Arabs.” The conglomerate owner Arthur Jensen, played by Ned Beatty (far removed from his “squeal like a pig” performance in 1972’s Deliverance), masterfully manipulates Beale to spread a much different message. “There is no America, there is no democracy, there is only … corporations. Those are the nations of the world today,” intones Jensen, impressively enough that Beale buys into it hook, line and sinker.

Yet this is a “truth” the world’s not so keen on. Jensen’s desire to encourage “dehumanization” and discourage individuals sinks ratings, fast. Christensen and Hackett almost become sympathetic as they puzzle their way out of a problem created by their corporate overlord. But their ultimate solution is so preposterous it snaps us back from the melodramatic turns of the film’s second hour and firmly reminds us that this is all one big joke.

Except, the joke’s on us. Christensen’s idea to follow around a group of unstable hotheads turned into the reality TV juggernaut, though today’s subjects are far more inane (I confess, I’d probably tune in if any of the Real Housewives started spouting Marxism and taking hostages). Her Frankenstein, Howard Beale, seems to be Glenn Beck’s spirit animal. Even Jensen’s hyperbolic ravings about commerce and capitalism being the only true system in the world seem to be upheld by various Supreme Court rulings over the past few years.

While television was the medium being skewered back in 1976, on this most recent viewing of Network, I thought increasingly of the internet. In fact, I rewinded and rewatched one of Beale’s final screeds, against the great “boredom killer” and subbed in “internet” for “TV” like so: “You’re beginning to think that the [internet] is reality and your own lives are unreal … This is mass madness, you maniacs! In God’s name, you people are the real thing, [the internet] is the illusion!” While we’re still consuming TV rapaciously (the average American watches five hours per day, according to a March 2014 report released by Nielsen), our social space has shifted online. Our dehumanized interactions on social media platforms has manifested a meanness hinted at by Christensen’s penultimate ratings idea; that obsession with ratings has a more modern interpretation in “viral” digital content. In fact, today, we might characterize Christensen as the precursor to the internet troll, or at least the content creators that rely on them for pageviews.

More than Lumet’s energetic direction or the three Oscar-winning performances or Chayefsky’s diatribe-laden script, it’s that quality of ever-relevant clairvoyance that makes Network worth watching, again and again and again.