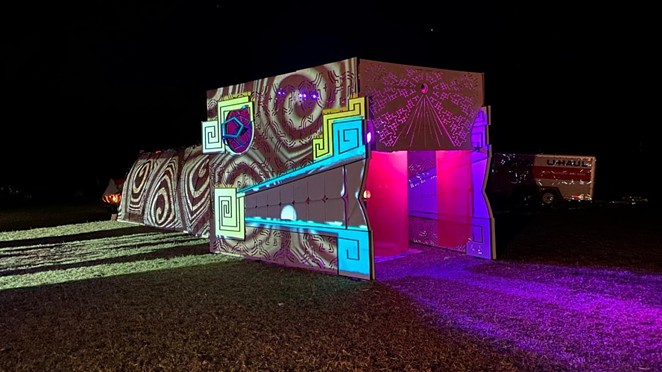 Art group Of the Serpent's large art installation for the Luminaria Contemporary Art Festival, which was stolen Sunday along with artist Timofay Trofimenkov's truck, has been recovered.

"The Serpent has been found!  Thank you San Antonio for rallying behind our artists!" Luminaria organizers wrote in a post on Facebook Monday evening. "The piece will require some repair work, and some equipment is missing, but Of the Serpent team is going to work round the clock to bring it to life on Saturday."

In a video posted on Instagram late Monday, Luminaria Executive Director Yadhira Lozano spoke to Of the Serpent members Jorge Luis Gamboa and Joseph Rogers about the situation.

Gamboa explained that someone broke into Trofimenkov's Lone Star Arts District studio and stole the keys to his truck, which were used to take the vehicle. At the time, the dissembled installation was being stored inside a trailer hitched to the truck.

Gamboa explained that the trailer was found ditched nearby with most of the components of the installation intact. However, a lot of tools and supplies had been removed from the trailer, and Trofimenkov's vehicle is still missing.

"They took a lot of things that can be replaced, but the irreplaceable part, which is the art installation itself, is still there," Gamboa said.

The Of the Serpent crew plans to complete repairs and display the installation as intended at Saturday's festival.

"The show will go on — we look forward to being a part of Luminaria," Rogers said.

In the video, Lozano added that Luminaria plans to launch a fundraiser to help Of the Serpent cover the cost of materials and tool replacements, but no updates were available at press time.