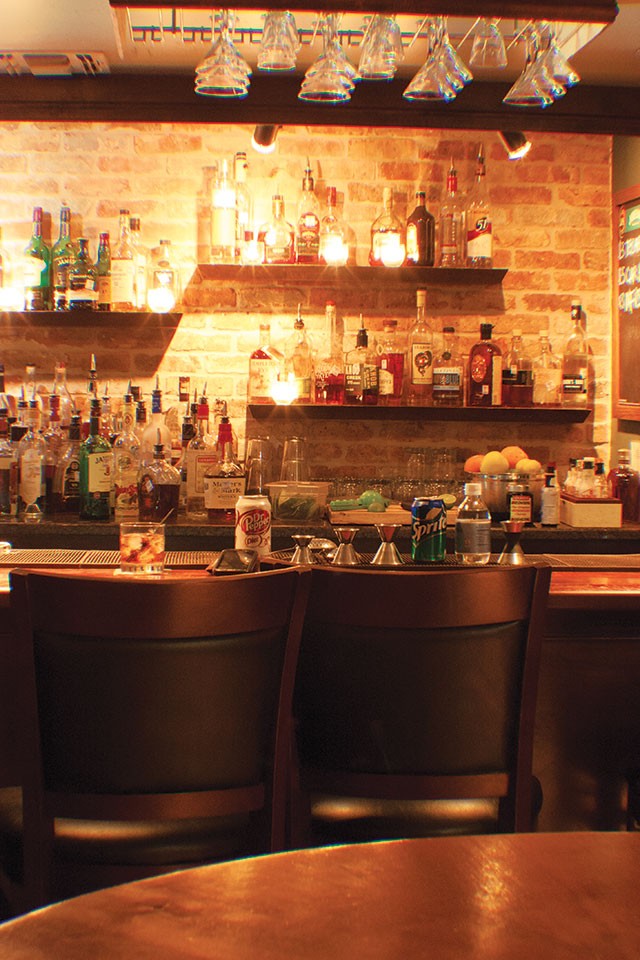 Copa Wine Bar
(19141 Stone Oak Pkwy)
My drinking companion for the evening, Shirley, and I stare at the menu for what in restaurant server time must seem like half a day. The menu is so expansive I check the bottom of the page for a code key, a compass or perhaps a series of illustrations not unlike the pre-flight safety placard we pretend to read just before takeoff. At any minute, I fully expect the server to finally lose her cool and scream at me, “Just close your eyes and point at something!” She doesn’t. She’s achieved server Zen. We finally decide to share the Esteva Tinto Roriz from Portugal with its description of: “Violet nose, ripe boysenberry, black plum, tobacco.” Realizing I’ll need fuel for tonight’s crawl, I order the Mediterranean dip, Spanish chorizo and the Irish porter cheddar. We spend the rest of the hour enjoying to varying degrees the “rustic” low-lit interior and discussing whether sommeliers are full of shit or not.

Cross-Eyed Seagull
(19141 Stone Oak Pkwy, Ste 206)
The bartender at Copa told us we needed at least one dive bar on the list so we sit at the Tiki hut in the middle of the beach-themed bar and order $1 Tecates (the special on Wednesday). Sharks hover over us. The ceiling consists of blue glass or mirrors. Are we supposed to be underwater? Baseball plays on the TVs surrounding the hut. There are booths to the side that belong in a swinger’s club but for the thatched roof and Christmas lights above. The music is deafening. Shouting doesn’t seem to help, even though every other patron here seems to be doing just that. We resort to making awkward gestures with our hands trying to communicate that we’ll finish our Tecates and leave. The place is filling up (with people). There is an odd sort of energy building when we give up on our beers and head to our next destination.

Knife & Fork Gastropub
(20626 Stone Oak Pkwy)
The first thing we do when we get to Knife & Fork is look up the definition of “gastropub.” According to the bar’s website: “A gastropub is a tavern serving high-quality beers, wines and spirits, accompanied by great food utilizing fresh local ingredients.” They appear to have as many beers as Copa has wines. I choke and order a whiskey Red Bull. We sit outside on a couch and enjoy the pre-autumnal air. Blind Melon’s “No Rain” plays. We discuss the lack of outdoor couches in this town. A foosball table sits unused on this Wednesday night. We realize we aren’t utilizing this place the way it was intended. We don’t order the food and we don’t drink the beer. We don’t watch the sports playing on the numerous TVs and we don’t attempt to play any of the games scattered around. Maybe Knife & Fork is approaching its space wrong, but we are completely satisfied and it’s hard to get up and head to the next spot, downstairs.

Green Lantern
(20626 Stone Oak Pkwy, Ste 101)
We head to the door with the green light. In true speakeasy fashion, we enter into low-lit basement bar. Candles illuminate the many bottles standing against the brick wall. A guitarist sings near the entrance. His volume is high, creating a chain reaction where people attempt to speak over the music, more people attempt to speak over the people speaking over the music, and soon everyone is shouting at each other, filling the small space with a cacophony of chaos and raising the energy level of the patrons (perhaps this is intended). The bartenders here know their stuff, so I trust them to make me something interesting. We’re given a variation on a Manhattan with maraschino liqueur replacing the sweet vermouth. It’s a damn good drink. We contemplate staying here for the rest of the night, but there’s work to be done.
Full Disclosure: Green Lantern owner Steve Mahoney also co-owns Blue Box, where Burris works part-time.

Bar Louie
(22610 US 281 N, Ste 105)
The strip mall is a ghost town by the time we arrive at Bar Louie (another recommendation by Copa’s bartender). The bar is big and feels corporate. Our suspicions are confirmed by the franchising section on the bar’s website: “With more than 70 locations across the country, Bar Louie combines the consistency of a national brand with local appeal.” We order the “Original Cin” cocktail with listed ingredients: “TY KU Sake Silver, Grey Goose, Domaine de Canton Ginger Liqueur, apple juice, agave nectar, lemon juice, cinnamon.” It’s a good drink, but feels designed by committee. We head outside to the patio where street lights cast shadows on box buildings and we wonder if we are catching a glimpse of the cocktail future. Will bartenders be obsolete, replaced by machines with perfectly proportioned pours and no need for tips? Before we leave, I make sure to hand money to my human. We can’t let the machines win.