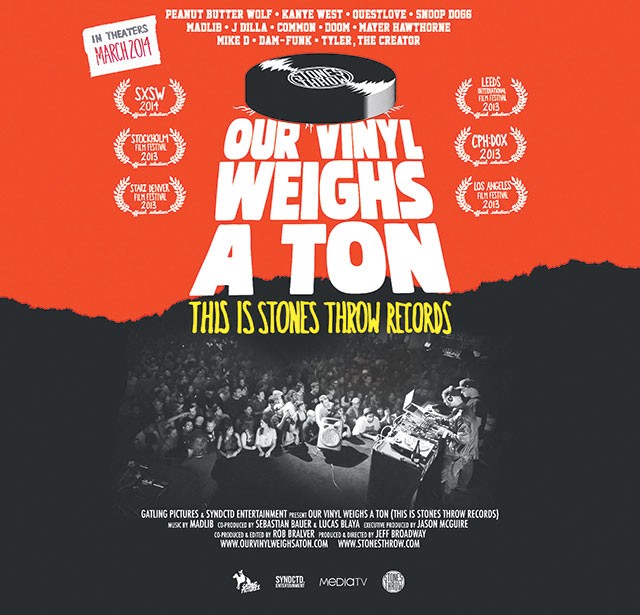 Despite all evidence to the contrary, Stones Throw is not a hip-hop record label. Though their imprint has graced the packaging of J Dilla’s Donuts and Madvillain’s untouchable Madvillainy, Stones Throw demiurge Peanut Butter Wolf turns down the rap label status throughout Our Vinyl Weighs a Ton, the new documentary on the LA-based independent.

Rather, as Vinyl boasts, Stones Throw is a culture of individuality, with hip-hop, funk, neo-soul and pop artists working prolifically to create for each other’s approval, placing critical and commercial success on the backburner. But with labelmates as pitch-perfect and pioneering as Madlib, J Dilla and Dâm-Funk, it’s a good group to strive with, the ideal melting pot for hip-hop and dance music’s future to stew in. “He does little tricks and nuances in his music that I know only I get,” says Questlove in Vinyl, paraphrasing the late J Dilla’s musical conversations with Madlib. “[He’s] talking to me and only me.”

From here, Our Vinyl Weighs a Ton takes an important turn, choosing to fast-forward to Stones Throw’s 2014 eclecticism, pressing artists like James Pants, Anika and the Stepkids.

Shifting through time with the poise of a good novelist, Broadway turns what could be a fanboy narrative into a well-curated retrospective on the label that has carried the torch of underground hip-hop since its start in 1996.

As it should, Our Vinyl Weighs a Ton spends a considerable chunk of its time on Madlib and J Dilla, the dual engineers of Stones Throw’s vinyl-popping, marijuana soul sound. Broadway gets some magnificent frames on Madlib’s Madvillainy collab with MF Doom; though they lived in the same house during the album’s creation, the pair worked independently, rarely seeing each other. As Madlib puts it, “The only thing we did together was a lot of chocolate shrooms.”

J Dilla’s segment is a remarkable look into the life of one of the 21st century’s most lauded producers, an artist who passed in 2006 from a rare blood disease, the same week his definitive LP Donuts hit shelves. Equally as notable, we get to see the most knowledgeable names in contemporary hip-hop and electronic music weigh in on Dilla’s work. A teary-eyed Kanye West, lounging on a luxurious fainting couch, says that J Dilla’s music “just sounded like good pussy.”

Fans of the music will want to bring a pen and pad to the Alamo Drafthouse showing. Yes, there’s a non-stop parade of enviable artists and albums to get privy to, but for those with creative projects of their own, Our Vinyl Weighs a Ton is a document of collaboration, raw dedication and go-for-broke innovation. “In 30 years, I want to see Stones Throw records either in the $100 bin or the 99-cent bin,” says Peanut Butter Wolf. “I want people who really hate it or really love it.”

Our Vinyl Weighs a Ton: This is Stones Throw Records