The Executioner, a 40-year-old paperback series, has been made into a comic a few times before, but I imagine the results have always been kind of frustrating. The story of Mack Bolan, a Vietnam veteran who wages a private war with the mafia after they kill his family, is familiar to most comics fans, and younger ones are definitely forgiven for thinking an Executioner comic is just a bad Punisher knockoff. Though the Executioner came first, Punisher’s much more popular, and writer Wojtowicz is apparently very sensitive to this. This issue, in fact, is basically a long explanation of how the Executioner is distinct from his better-known duplicate, characterizing Bolan as everything from a mindless killing machine with “no internal monologue” to the American Indian folk legend Coyote the Trickster. The artists apparently didn’t get the message, and draw Bolan exactly like the Punisher, even though Wojtowicz clearly spells it all out for you: “the Executioner’s not some one-man army ... with some obscenely phallic assault weapon ... like something out of a comic book or action movie.” Nevermind the fact that the shrapnel-spraying wiener guns are exactly what give both characters their appeal to society’s creepy loners.

Another Marvel vigilante, the Black Tarantula, is back in this single-issue story. Black Tarantula (Carlos LaMuerto), in addition to having a bad-ass name, is a reformed drug kingpen and ex-con who’s used his super strength and healing powers to bitch slap both Spider-man and Daredevil, and his struggle to force gangs out of his neighborhood while retaining enough morality to separate himself from the thugs he fights makes for a pretty decent storyline. This, his second appearance as a one-shot wonder in the Daredevil universe, expands on the storyline set up in the last Daredevil annual. The Tarantula is essentially a mash-up of several other Marvel heroes, but Parks’ script is solid, only losing momentum when it’s forced to check back in on Daredevil. The character would work better in his own miniseries, but his lack of popularity (and originality) will probably keep that from happening, forcing him to constantly piggyback on the Man Without Fear. Daredevil fans expecting a one-shot full of Matt Murdock will most likely be disappointed. 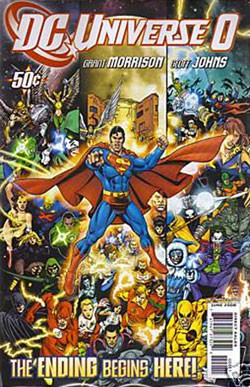 Zero is intended to wrap up the whole Infinite Crisis/52/Countdown to Final Crisis cape opera in a single issue so all the thousands of readers who abandoned this crap over the past few years can come back in from the cold. Rather than trying to summarize the entire storyline of the multiverse in a single issue — an effort that would take a graphic novel at least twice the length of Box Office Poison and would end up reading like a year’s worth of Soap Opera Digest on peyote — Johns and Morrison wisely decide that most people simply do not give a rat’s ass. The retardedly complex 52/Countdown series, which combined ran weekly for two freaking years, are basically summed up as “There’s a whole bunch of different universes where slightly different stuff happens.” And considering that these weeklies and their ungodly tie-ins weaved a nearly incomprehensible tale starring Z-list superheroes like Mary Marvel, the Metal  Men, and (for real) the Karate Kid — that’s about all any non-obsessive wants to know. Zero then delivers in a way a DC maxi-series was originally intended, giving us a few pages each of the heroes we actually want to see — Batman, Wonder Woman, Superman, etc., briefing us on their current storylines. Basically Zero is just an advertisement for the best parts of the current DC universe, but the good writing and kick-ass artwork more than justify the 50-cent price. If you’ve stopped reading DC and would  like to come back, or have 50 extra cents and just want to see a bunch of shit getting torn up dudes-in-tights style, this is a great buy. •