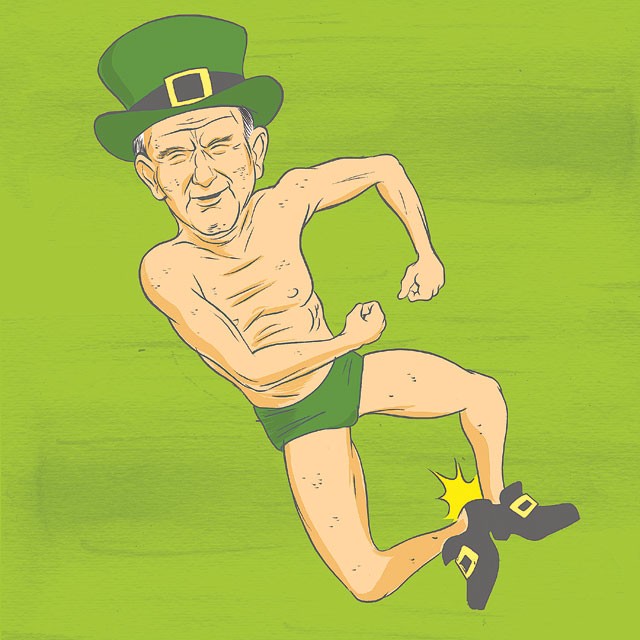 Bars are places where people come to unwind, let their hair down a little and sometimes say what's on their minds. Bartenders have heard it all, but even the most jaded have tales they tell each other in the wee hours of the morning.

Come as you are

Several bartenders have reported a man in the South Texas Medical Center area wearing nothing but a red unitard to step out and get his drink on. Several employees at the popular watering hole Pressure Cooker saw him wander in before opening time, stare everyone down when told the bar was closed, and leave. But another bartender in the area says he has spoken to the man in the stretchy garb and had an interesting conversation about the comfort of the outfit.

Tales from James, an off-duty bartender drinking at the Pressure Cooker, tell of the homeless man using the bar's grill out back to "cook" leaves as if they were food, and an angry Alcoholics Anonymous sponsor who had to be called when an intoxicated patron was only able to give her address as "I-10."

The most memorable, however, was an 80-year-old man dressed as a leprechaun in a green Speedo who jumped into the bar, gave a hearty yell and ran away.

A visitor to Kork wine bar left a lasting impression with his appearance and gifts for the olfactory senses of patrons in downtown New Braunfels. "The guy stunk so bad, he stunk up the whole square footage of the place," says Kork co-owner Patricia Morris, who paid for the man's beers and politely asked him to leave. "People were dry heaving in the parking lot. Even the bottles he touched smelled an hour later."

Two men in drag walk into a bar and, at some point during the evening, are confronted by a very small man from India, who in the course of an argument kicks one of them, a very large African-American transvestite, and dashes for the parking lot. The assaulted drag queen pulls off her six-inch pumps and says to the bartender "Hold my heels, honey. I'm going to kick his ass," and dashes after the diminutive hater. Nick, who is telling the story at a Christmas party of staff from several San Antonio bars, says none of them have been seen since.

A shoplifter walks into a bar and, after being cut off from drinking more, tucks two open beers into her sweat pants, reports a bartender at Baker Street pub. The cops are called to the scene where the woman who tried to use her pants as a koozie claims mental and physical abuse. The police let her go after she tells them she walked there, but stake out the parking lot from the other side of Wurzbach until she climbs into her car an hour later, and puts the keys in the ignition. Gotcha.

Dana Kummins, a veteran of several New Braunfels and San Marcos establishments, was working the busiest station at a popular bar while a young blonde woman with no bartending experience struggled to hold down her station at the slow end of the bar.

The owner grabs Kummins away from customers waiting four deep and points to the new employee staring at a drinks list and growls "find out what she needs." The befuddled blonde says she's looking for a drink called the William Wall. A puzzled Kummins asks her what's in it and gets nowhere so she approaches the customer and asked him what he needs.

"I'm William Wall. I'd just like to close out my tab."

The most common bartender tales involve bodily fluids. If you're eating, move on to the next story, and mark this segment for later reading.

Kummins, now a manager at The Faust Hotel and Brewing Co., recalls moving to New Braunfels for a job where Thursday nights were typically slow. She was unaware that Thursday night during the 10-day Wurstfest celebration is college night and comes with hordes of after-party revelers.

The Bud Light tap broke from vigorous use and she had to find a hammer to slam it back in place to stop the spewing beer, even as customers were piling up, and before backup bartenders arrive. At the end of the night, the men's room was covered in puke except for the toilet. "You could eat off that toilet. We hosed everything down and had to scrub every inch, but the toilet," she says. "But I made like $500 that night, so it was cool."

Danielle Mendoza, a bartender at a popular bar on Fredericksburg Road, says her strangest moment at the bar was when a credit card was declined on a $200 tab. All but the card holder bailed out quickly. The remaining man tried to make a run for it, but was cut off by the door man, an intimidating mixed martial arts practitioner. Fright caused him to lose control of bowels, bladder, and esophagus simultaneously.

"People say crazy things all the time. You get used to that," Mendoza said. "But this was just (makes a stunned expression) like, 'I'm not cleaning that up.'"