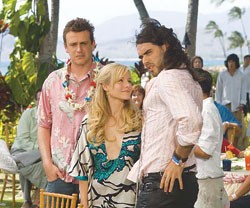 
Look, man. You guys know who you are.Right this minute, there are folks out there waiting, flush with either trepidation or bitterness, for this thunderin’, steamrollin’ Apatow train to hop the rails, once and for all, and fall flaming to the sea like a potty-mouthed Icarus. I know; I’ve seen the forum posts.

Not that I was ever all that terribly concerned about the situation myself (I’ll admit straight away that I’m no Freaks and Geeks o.g., and didn’t really start wholeheartedly imbibing the Apatow Kool-Aid until Knocked Up `or maybe the “Age of Aquarius” outro at the end of Virgin, at the earliest`), but now, having taken in the Apatow-produced Forgetting Sarah Marshall — and at the risk of sounding distinctly like a shill — I don’t expect to find myself having second thoughts about trying anything these guys put out for quite some time.

Now, really, I’m on the verge here of committing what is becoming the customary disservice in these matters. It’s a smidge unfair to credit Papa Apatow (Papatow?), to the exclusion of all others, with the success of absolutely everything to which his far-reaching name becomes attached (with the exception of Drillbit Taylor). Certainly, he’s an eagle-eyed and prescient scout-cum-incubator of young talent — a mastermind, really; something akin, perhaps, to what a young
Coppola purportedly was for Lucas and a legion of SoCal filmmakers during the New Hollywood days. Just as certainly, though, the winsome
Superbad owes at least as much to (Apatow find) Seth Rogen and writing partner Evan Goldberg as it does to its rightly celebrated producer. In much the same way, the uniformly charming (and genuinely uproarious) Sarah Marshall will be, if there’s any justice, just as much a coming-out for surpassingly likable writer-star Jason
Segel (another find) as it will be another feather in Apatow’s already-brimming cap.

As of this writing, I’ve seen Forgetting Sarah Marshall twice. Twice, because I wanted to catch the moments drowned by laughter the first time around. And, faith, there were several. Again, not to gush, but it’s just the straight truth: Flick was hilarious, both times. The story is nothing overly complex: Dude gets dumped by (famous) woman he’d planned to marry, hits depths of despair, decides to cheer himself up by vacationing in Hawaii — where, it turns out, his ex is on the romp with a replacement beau/Europop singing sensation/vaguely effete sexual dynamo. (These things happen.) But Segel’s vulnerable and acutely perceptive scriptwork (there’s a gut-busting “hi” scene that should indict a fair percentage of viewers) — which, interestingly, feels decidedly less improvised than Apatow’s Knocked Up or Virgin — hits early with the laughs and endearing “I’ve been there” moments, and doesn’t let up.

It’s one of the very few comedic screenplays I’ve encountered, at least recently, in which not a single joke seems to fall flat. (Hot Fuzz, maybe?) And not because it doesn’t take risks: One of Segel’s most rewarding bits — which I don’t dare ruin — is an out-there extended musical device that’s not only irresistible, it’s reportedly landed Segel a gig writing the next Muppet movie. And speaking of vulnerability and Segel’s “bits” — well ... the less said, the better. Marshall sports an excellent supporting cast, but it’s Segel, really, who provides the heart (watch for a cereal line that neatly sums up his unpretentious appeal). In turn, then, it seems we should thank Apatow heartily for providing the Segel.

In all honesty, I can’t remember having more fun in a movie theater over the past few years than I’ve had watching Knocked Up, Superbad, and now, Forgetting Sarah Marshall with packed, howling houses. Something about laughing that hard and that often, in unison with that many people, is a wholly refreshing, almost rejuvenating experience — one I’d recommend without reservation to anyone who’s confident he or she can weather a few dick jokes. Sate your fears, fans of Apatow & company: These guys are here to stay. •