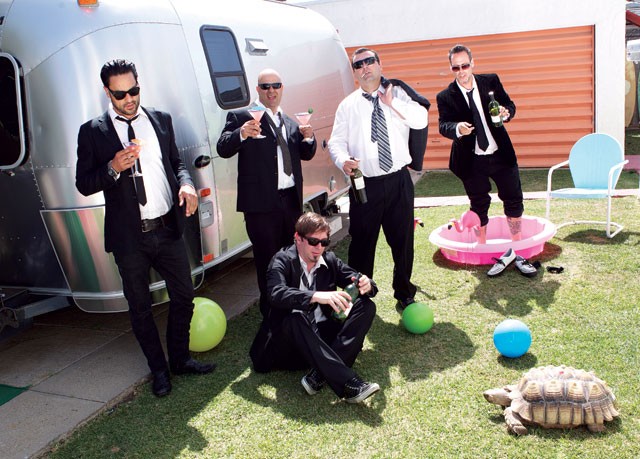 Punk's not dead, but it's getting frightfully close to retirement age. SoCal hardcore legends Strung Out weren't even part of the first wave of L.A. punk — even though he formed the band as a teenager, frontman Jason Cruz was a decade too late to count the likes of X or Suicidal Tendencies as peers. Even so, he's been in the game for over 20 years at this point, and that takes some discipline. He's got a simple piece of advice on how to stay focused after so many years playing the same songs with the same guys: "Start another band," he laughs.

Strung Out will be appearing Friday at the White Rabbit (Such Gold is opening) as part of the "Twisted in a Suburban Wasteland" tour, in which they'll be pulling the live-album trick, tearing through a pair of their best-known offerings complete and in order: 1996's Suburban Teenage Wasteland Blues and 1998's Twisted By Design. He insists there was no grand design behind the format choice.

"We just wanted to get out there and have some fun before we hunker down to make the next album," he says.

That new album, their eighth, is due out in 2013. It's likely to continue Strung Out's musical progression — blending classic Southern California pop-punk with melodic hardcore elements, a now-common style that Strung Out helped to pioneer.

"I don't necessarily feel any ownership of that sound," Cruz said. "I'm just grateful that we were there at the right time and in the right place to be part of a scene that really supported us and made it possible to earn a living making music. I feel like people in bands are getting younger, and that scene isn't there for them any more, so a lot of bands — a lot of talented bands — if it doesn't happen for them right away, they're giving up."

After so many years in the business, Cruz — who's also a writer, poet, photographer, tattoo artist, father, and all-around punk rock Renaissance man — has seen a lot of trends come and go, and like many performers, has to find ways to keep himself engaged. He stresses the importance of dedication but, has he ever thought of hanging it up?

"Only every single day," he said. "It's a job like any other job — you have your good days and your bad days."